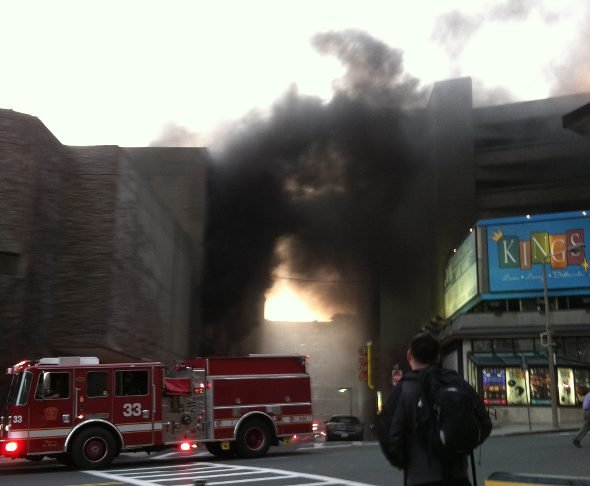 The fire not long after it started. Photo by Bosfiddle.

At 9:13, Boston EMS tweeted the scene was clear of smoke.

An explosion in a building housing two large transformers next to the Back Bay Hilton's parking garage at 40 Dalton St. sparked a three-alarm fire that filled the area with toxic black smoke just a block from the earlier fire at TC's Lounge, forced the evacuation of a large hotel and caused power outages throughout the Back Bay and surrounding neighborhoods.

Julie Loncich reports 20,000 NStar customers lost power in the Back Bay, the South End, Chinatown and Kenmore Square - and that they could be without power through Wednesday. 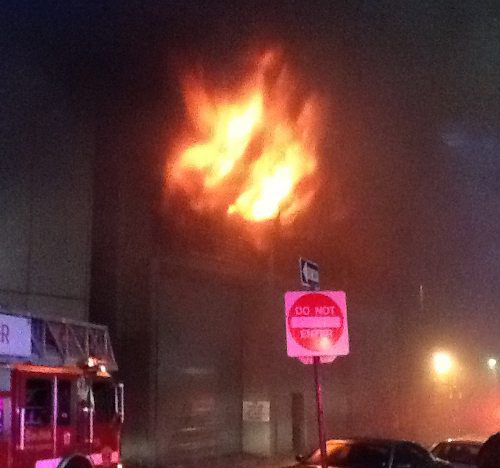 The fire quickly went to two alarms after firefighters arrived around 6:20 p.m. At 7 p.m., with NStar emergency crews still not on scene despite increasingly anxious requests from BFD, fire commanders declared a third alarm as a 115,000-volt transformer burned, spewing smoke that MBTA officials warned their police officers would not be filtered by their emergency masks. City officials warned people to stay away from the area and stay inside.

The transformer that was on fire is cooled with mineral oil. While not toxic, it is never good to inhale any kind of smoke.

Boston firefighters got some help from Massport, which sent two trucks over from Logan, one loaded with the foam needed to put out the oil fire.

Around the area, people reported power issues. Lights flickered and then died from Dalton Street down Boylston around 7:30 as NStar turned off the transformers to help damp the fire.

The Pru, the Hancock and the Hynes lost power; firefighters not at the fire scene went from building to building in the Back Bay, making sure nobody was stuck in elevators. The Fire Department's own fire-alarm office lost power, as Kenmore Square and Columbus Avenue down to West Newton.

Boylston Street isn't supposed to be this dark at night. Photo by Matt Karolian: 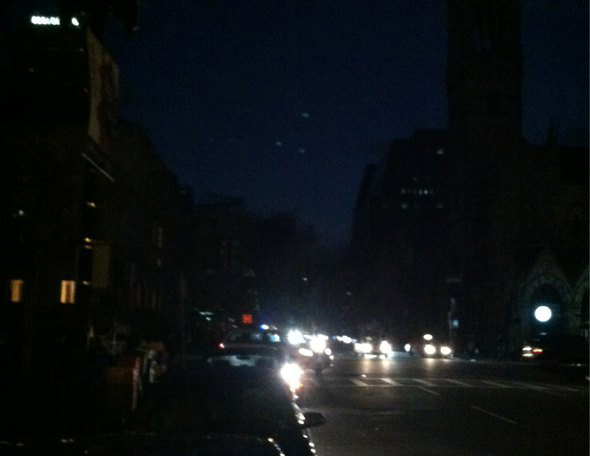 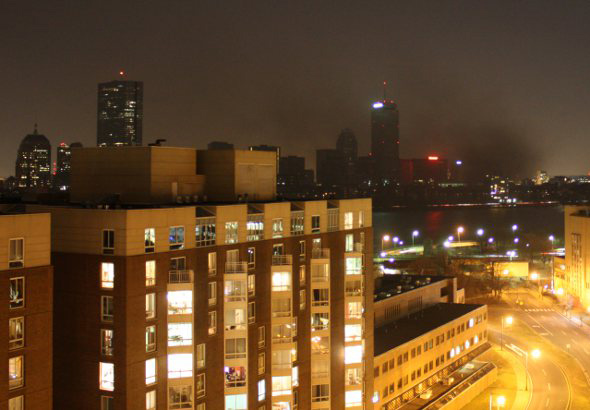 BPD brought in officers from other parts of the city to patrol the blackout area.

The T shut stations at Mass. Ave. on the Orange Line and Hynes, Symphony and Arlington on the Green Line. Firefighters evacuated the Hilton, where guests are expected to spend the night at the Sheraton.

Amy Deveau, out for drinks at the nearby Dillon's, reported firefighters ordered people at the bar to stay inside because of the thick smoke.

Bar-goers were evacuated on a T bus around 8:30 p.m. Riggs, also on an evacuation bus, reports things did not go well:

Bus finally moving from Apple Store to Symphony. Was forced on, then sat 30 mins. Coulda walked out in that time. Bus drove from Apple Store on Boylston to fountain at Church Park. Boston fails at emergencies.

The state shut the turnpike at both ends of the Pru, leading to scenes like this (photo by Gustavo Quiroga): 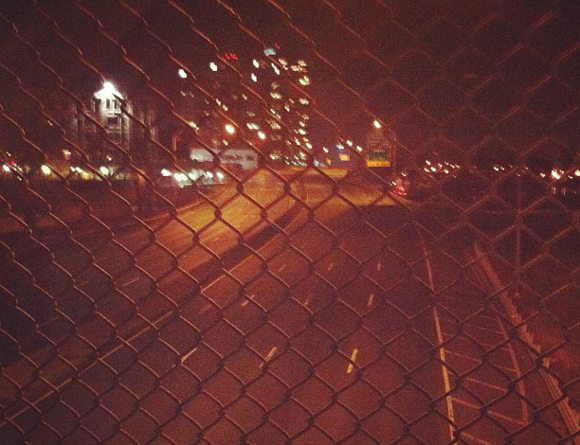 Lights out all over back bay

Lights out all over back bay from fens to copley. Somehow Christian scince center unaffected- an oasis of light. Lights visible on buildings dowtown in the distance. Streets filled with people. Lots of helicopters makes it seem like a war zone. Uhub comment box nearly unusable with Android phone. Oh the humanity.

I would like to find out if Nstar still owns old PCB containing transformers. Such fires can be dangerous.

The view from the street:

NU just activated their alert system asking everyone (students, staff, faculty) to stay away from the area due to the fire. Crazy!

Everyone in area should stay inside. The pru is dark as a steer's tuchus on a moonless night.

I recollect being present in a similar scene in '98 on Beacon Hill; it really sucked. I hope they get this under control soon.

Left the place I volunteer at

Left the place I volunteer at in Back Bay, and the area was very dark. Decided to walk to Park St, and the lights were out until halfway through the Public Garden.

Got evacuated from the

Got evacuated from the library shortly after the power went out, it was weird seeing all those lights out. The green line is shut down from Hynes to Arlington so I got a ride home from a co-worker. And I now have a weird chemical taste in my mouth and stinging eyes.

while biking home from Microsoft NERD and the MIT library tonight. Oddly I didn't smell it on Memorial Drive right across from where this was all happening.

"...it is never good to inhale any kind of smoke?"
Bro, quit harshing my buzz...

Smoke in Chelsea and Revere

but not really in South Boston. People seemed to be avoiding the Green Line, the E was quite empty going inbound at Northeastern, have to be honest, it was great going express to Boylston. The buses didn't have as much luck, the 1 was FUBAR, the 39 would do well for a while, and then just disappear for 30 minutes, and the 55 was just sort of wandering around, as a large part of its route was cut off.

So, you're saying the 39 was operating normally?

Seems to me NStar needs to be

Seems to me NStar needs to be held accountable for 1) failure to respond in a timely fashion. 40 mins is not timely, and 2) over-reacting with the shut-down. As the situation stabilized chatter implied much more was shut down than needed to be.

Some dude on a bike asks the cop what happened, and the cop just reams him a new one, so he can go back to talking to his buddy.

Way to go, boys. Bein' dicks just because you've got a badge and a gun and CAN.

Lyft driver convicted of raping sleeping passenger in the back seat of his car
Boston to keep several street changes originally made for the Orange Line shutdown
Night reflections
8:10 p.m. on a weekday perhaps not best time to spray graffiti at the Copley T stop, man learns
Reed-b-gone program along Muddy River continues apace
Life-sciences labs and affordable housing proposed for space over turnpike and Green Line on Boylston Street in the Back Bay