Brake for goose: It could save your life 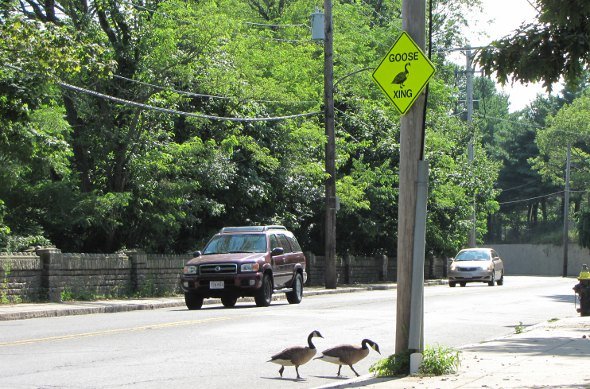 On River Street outbound from Cleary Square, just before Turtle Pond Parkway, there's this Goose Crossing sign. This afternoon, what seemed like endless squadrons of geese took full advantage of the sign, crossing from the Mother Brook to their ancestral grazing grounds on the large field across the street.

sure but if a PERSON wants to

It WOULD be nice to get a

It WOULD be nice to get a crosswalk there for humans. A well-used path crosses from the ballfields across river street to Readville there.

can't these little flockers fly? I'm pretty sure they are experts forming v-shaped squadrons each fall to head south thousands of miles.

so why do they insist on their crossing rights like spoiled south-enders complaining about their street sign fonts?

Hey, it was hot out there

Too hot to fly when there's a crossing right there!

You wouldn't even want to be a cop trying to give a jaywalking ticket to a goose, much less explain it to your sergeant.

Geese lose their ability to

Geese lose their ability to fly while molting.

Really went out of your way to take a swipe, eh?

If you're going to take the long way, aren't there more worthy class warfare targets in Beacon Hill and Back Bay?

thanks for the explanation, I did not realize they were flightless til mid-August. http://www.wildgoosechasers.com/canada-goose-facts...

Now do you have a scientific explanation for those south-enders?

I hate to argue science with anecdote, but what the hell.

I play softball all around the city of Boston. Geese are often on the fields prior to play. Please believe me when I tell you that those geese don't walk away once we start playing. They run, take off, then fly. This happens from April through September.

Geese (and other migratory birds) in cities are often thrown off of their natural yearly cycles because people feed them, there are warm-enough places for them to go and be safe, and various things like artificial light and heat can throw off their perception of what season it is and what they are supposed to be doing. It's kind of like people being jet-lagged or having seasonal affective symptoms. It can lead to not molting, not migrating, not laying eggs at the correct time, and all sorts of wild, wacky things. There still seem to be enough of the damn things despite this though.

Where I went to college there were geothermal springs, so the creeks were warm all year and didn't freeze when the ground around it was frozen. The ducks didn't migrate. If ducks don't migrate, you have males who are ready to mate once the daylight tells them it's spring, but females whose bodies aren't looking for this because they didn't migrate and return, so you end up with what the biologists call "duck rape season."

It involves a lot of loud and frantic quacking.

It really could save your life

Especially if they're flying.
I'm a city boy used to pigeons getting out of my way.

I was once on I95 at dawn near a body of water. Gaggle of geese in the breakdown lane were a fair distance from me.

They started lumbering for takeoff across the highway and I, in my early morning mindset, didn't pay much attention.

Next thing you know I had geese filling me whole field of vision and mere feet from my windshield.

I braked, they pumped their wings and all were OK but there would have been serious casualties from both species if I didn't.

They can sure as hell mess up a plane, too!

A few weeks ago, I was driving down Route 2 from Alewife to Lexington. I saw what I thought were two gulls flying really low, and then the top of a car clipped one and I realized

1) The birds were closer than I thought,
2) They were swans,
3) There was a stunned swan tumbling down the lane in front of my car.

Did I mention this was just before 9 AM on a weekday?

I stopped as close to the swan as I could, put on my hazard lights, called the state police and held my breath for the next twenty minutes, praying that everybody could see I was stopped in the lane.

I made that choice because the swan was alive but dazed and sitting still, no humans had been harmed, and I thought it would be more dangerous for multiple drivers who were not expecting a swan to try to avoid it, risking damage to cars, people and/or swan, and that people would be more likely to see a bright orange car stopped in the road.

Last I saw of the swan, a nice young state trooper was trying to chase it off the road. No idea how that turned out.

Maybe they should move the

Maybe they should move the goose crossing to a safer place with less traffic. :-)

Great story but was it a troll?

My cynical nature tells me this was a legit request a la some of the Citizens Connect submissions we're now seeing.