Our champions, our city

On the Longfellow Bridge.

What a great day for a parade.

From Fenway Park to the banks of the Charles, Bostonians lined up early for a chance to see the 2013 World Champion Boston Red Sox - and doesn't that sound good to hear?

When the procession of Duck Boats got to the Boston Marathon finish line in Copley Square, it stopped. Jonny Gomes put the World Series trophy and a Boston 617 Strong jersey on the finish line. Then the players and fans listened and joined in a chorus of "God Bless America." 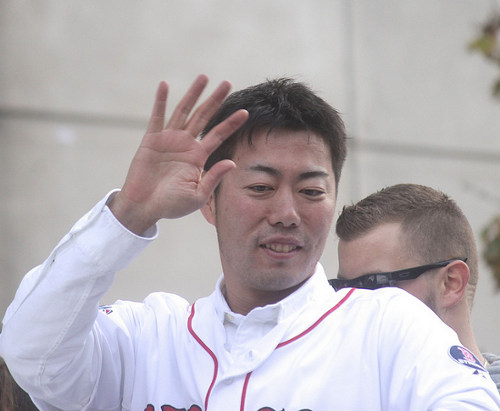 One couple got engaged at home plate at Fenway today. 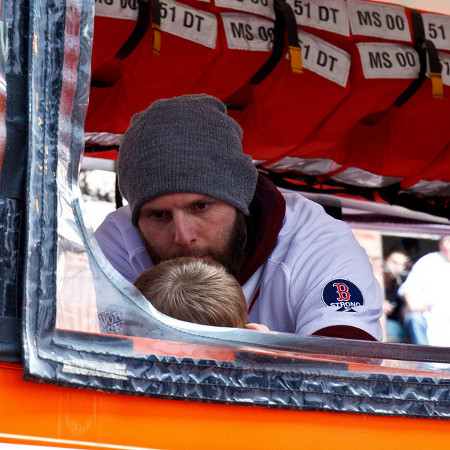 What would a Sox parade be without David Ortiz? 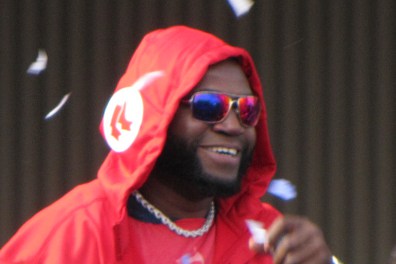 Colin Steele reports this cow-man cheered the Sox on from a second-floor ledge on Boylston Street - at least until police told him he was being udderly ridiculous and to hoof it back inside: 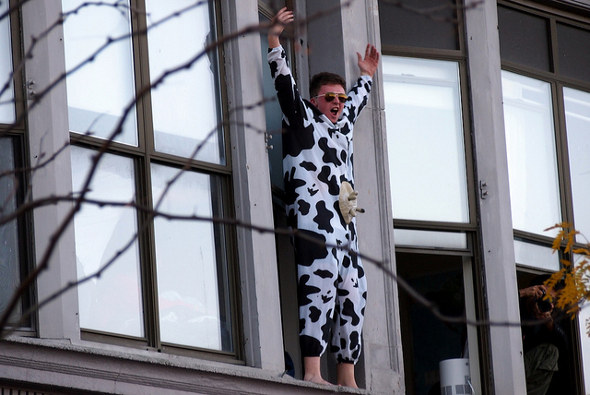 At Government Center, a Fox 25 reporter asked some random guy if she could sit on his shoulders: 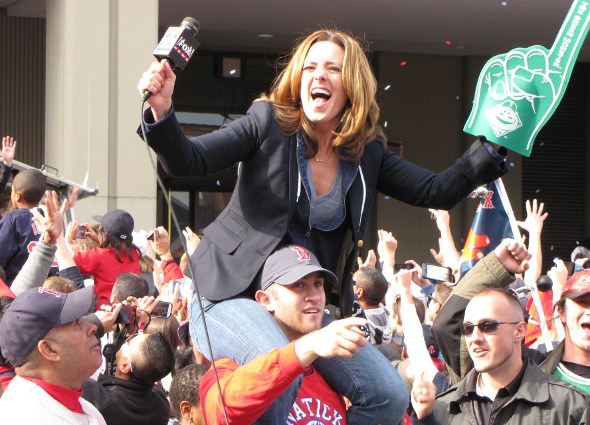 Shane Victorino was having a grand time at Government Center: 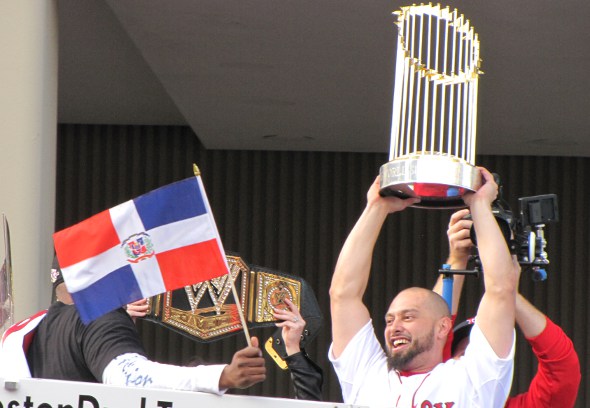 So were Mike Napoli and Jonny Gomes: 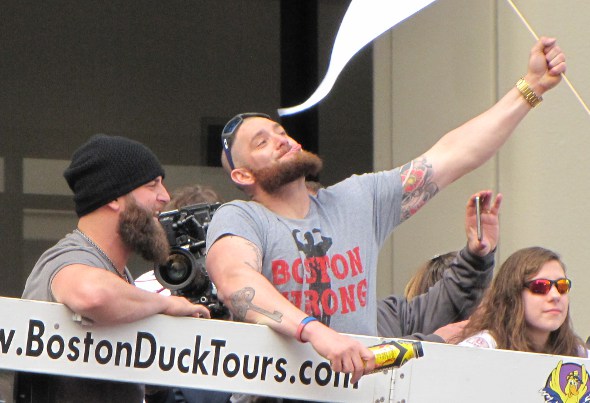 One guy on the Longfellow had a really clear view of the Duck Boats in the Charles: 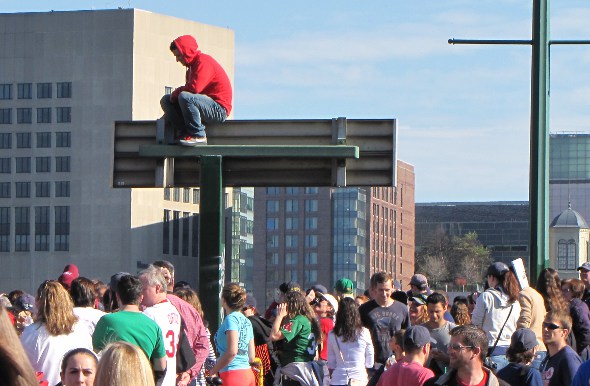 Not everybody wanted to be at the parade. There was this dog on the Longfellow: 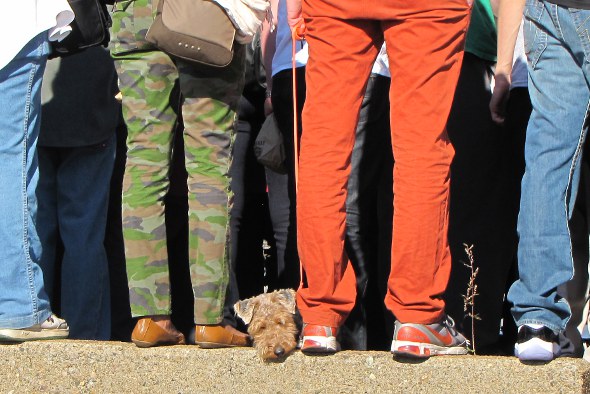 And this woman in Copley Square, whom Michael Graney reports just tried to barrel through the crowds to get from one side of Boylston to the other: 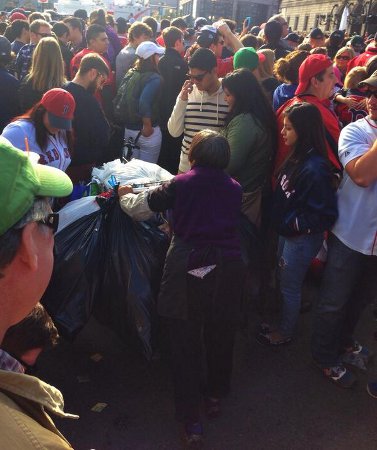 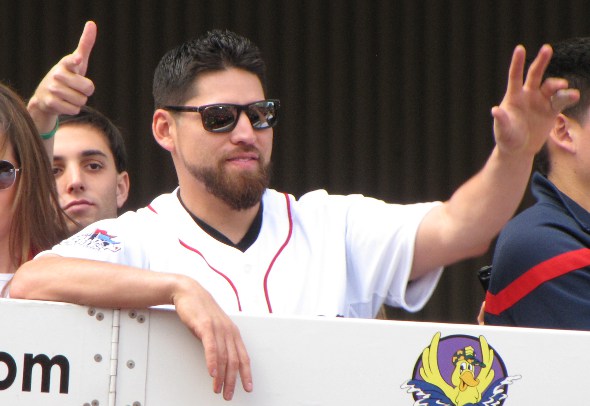 Jarrod Saltalamacchia smiled from beginning to end of the parade, as Colin Steele shows: 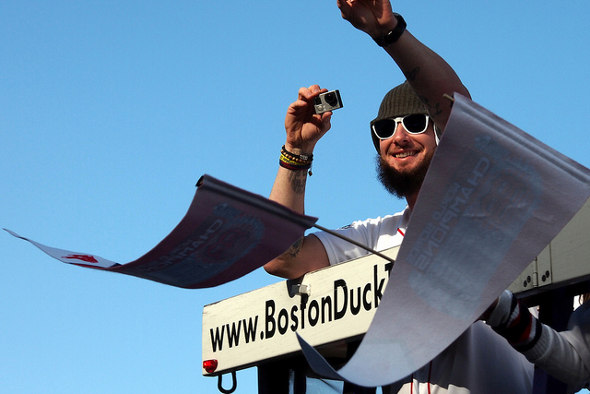 Security was omnipresent - even on the roof of City Hall: 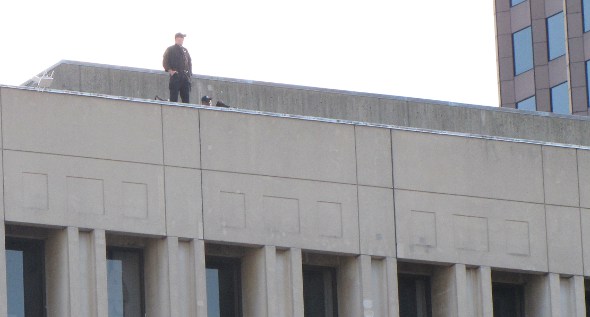 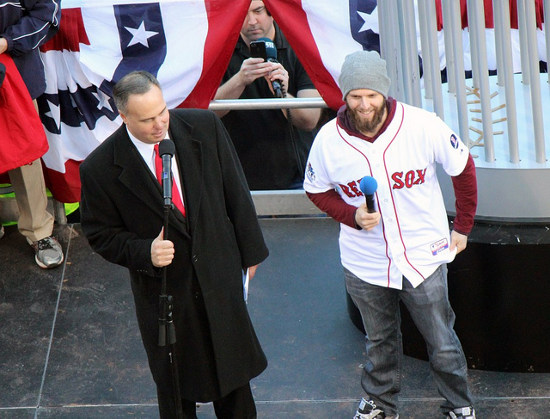 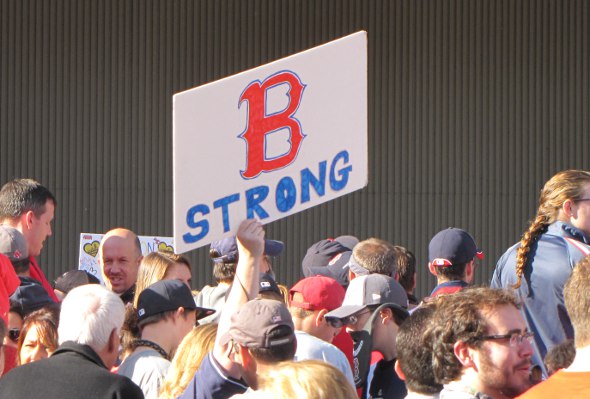 Photos by Photographynatalia and ColbyTC copyrighted. Photos by Colin Steele and Ben Heyman posted under this Creative Commons license. See more parade photos in the Universal Hub pool on Flickr.

Shameless self promotion: My

Question for you, Brian

Are you secretly the Flash (no pun intended). How do you manage to be everywhere all at once and get so many pictures from different locations?

I don't just mean yesterday - your ability to be where the action is constantly amazes me.

I wish I had a good answer

I wish I had a good answer for you, especially for yesterday, since lately I've been walking or taking the T everywhere. A little bit of luck, and knowing where to go (or happening upon something by chance, as has happened) and somehow I pull it off.

My real feat yesterday was seeing all of the duck boats in the water then walking to Galleria Umberto before they ran out of pizza.

A few of my own as well - hanging @ Berkeley & Boylston

I don;t give a flying f#ck about some BILLIONAIRE'S "TEAM" winning anything. And if you do? Fuck YOU! Die. I am Boston. The "Red Sox" are a friggin show! Grow up. John Henry is Illuminati- a devil and demon. Ireland forever. To hell with England and their "Red Sox".!

Back that truck up and take a xanax

These guys are not my heroes either. They are a bunch of people who make my life more entertaining and fun that it would be otherwise. That's all I ask of them and that's what I get. If you don't get a laugh of Mike Napoli wandering the streets of Boston shirtless last night then I don't know what will make you laugh.

As far as the illuminati goes, I think you got lost and ended up on the wrong site. Shouldn't you be on Alex Jones, Dave Icke or Vigilant Citizen's sites instead?

Here, wrap some of this around your head

Now that you're just calling people names and wishing death on them, I'm not going to let your comments through. Yeah, the Illuminati told me to do that, fnord.

. . . You are just another hungry "alternative journalist" willing to spew whatever power tells you to spew- and you believe it- because you have to. Otherwise? How could you live with yourself?

Me? I do what many consider a low job- but to me- nothing more honorable right now. But that's me- a crazy Mic whose family has only been here for going on 200 years and still all Irish. But ban me- because- I know nothing- have seen nothing- learned nothing from my family history- and you know everything.

Thank you wise one! I wish you well in your future en-devours as a pusher of lies for money and power.

I KNOW- you will be rewarded quite well! Enjoy that Weston home!

I'm going for an entire Caribbean island state. Like all the really cool alt-journos have these days.