Why Todd English's replacement Olives has to be 'new and shiny:' A judge won't let him take anything out of the old one 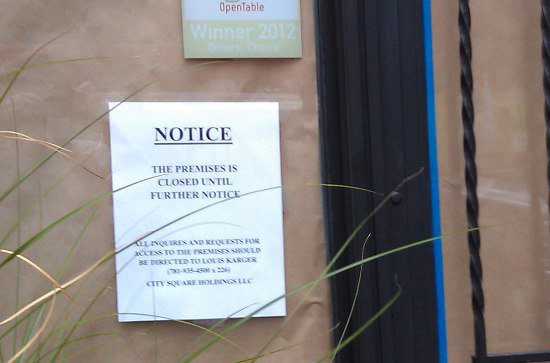 After people noticed last week that Todd English's Olives in City Square was closed, the jetsetting celebrichef with Boston roots issued a press release promising an all new Olives at a "new and shiny" location, one better suited for the times than dowdy old City Square, even if he had only opened a new and shiny Olives there last year:

Charlestown is and will always have a special place in my heart. It is with sadness that I will be leaving this neighborhood. We have been here since 1989 and so many wonderful memories are tied to this place. But with the incredible way America's culinary landscape has been evolving, I have decided that Olives - my first and signature restaurant - must also evolve.

What English forgot to mention in his wistful press release was that he had no choice in the closing of Olives - his landlord closed it for him, after convincing a judge last fall to let him seize the restaurant and all its belongings, including its valuable liquor license. Seems English owes a bit of back rent - some $780,000 in rent and interest dating to 2010.

Meanwhile, English faces similar problems across the harbor, where the operators of Faneuil Hall Marketplace got their own court order just last month to attach not only the liquor license of his failed Kingfish Hall but assets of his holding companies, in a lawsuit in which the marketplace now charges English with running a fraudulent financial shell game to suck assets out of the restaurant to avoid paying them.

According to a lawsuit in Suffolk Superior Court by William Carey, who owns 10 City Square in Charlestown, English stopped paying rent on Olives in early 2010 - several months before a fire that knocked the restaurant out of business for two years.

Carey, who blames English for that fire, alleging he failed to have the restaurant's ducts cleared of grease, sued English last September for $780,942.72 in back rent and interest.

At first, Carey seemed content to let the lawsuit wend its slow way through court and to try to negotiate a settlement with English.

But then the Globe found out about the suit.

In a court filing, Carey wrote that after a Globe reporter contacted both him and English, he agreed with a request from English to have his lawyer tell the nosy reporter that both sides were working on an amicable settlement.

But after the Globe story appeared, English got really mad, Carey wrote. He said English sent him a text message reading, in part: "I don't want to have to blow u up, but I will. Not good for anyone." And he refused to meet to discuss a settlement.

"As the relationship with Mr. English has become contentious and in light of his threat to 'blow me up,' I am concerned that Mr. English may remove fixtures and other items from Olives and cause damage to the leased premises," he wrote.

In a separate case in Suffolk Superior Court, a judge agreed last month to let the Rouse Companies attach close to $2 million in English's assets to try to recoup the nearly $1 million in rent he failed to pay for Kingfish Hall. These assets include his ownership of two holding companies and, as at Olives, the restaurant's liquor license.

Rouse filed its request for asset attachment on June 7 - a little more than a month after English's CFO, Ron Chorney, and his attorney, Dennis Quilty, appeared before the Boston Licensing Board to successfully ask for more time to sell the license to help pay off Rouse.

The board theoretically bars owners of liquor licenses - which are in short supply - from just sitting on them, but the board has consistently given English extension after extension to do something with his licenses at both Olives and Kingfish Hall.

In its request for attachments, Rouse said a deposition of Chorney and financial records from the company showed that even as Kingfish Hall - and its legal owner, Omega III LLC - was falling more and more behind in its rent to Faneuil Hall, it was continuing to funnel large amounts of cash to English's holding companies - which used the money to pay off debt at an Olives in Washington, DC and contribute to English's large salary and car payments.

On June 12, a Suffolk Superior Court judge agreed to attach assets of both Omega III - which now consists pretty much only of the liquor license - and English's holding companies. Rouse, the judge wrote, had proven "there is a reasonable likelihood that the plaintiff will recover judgment."

In his own filings, English has denied all the allegations.

This has to be the end of this guy,right?

He seems to be very shady in his business dealings. It doesn't matter how good your food is if nobody will lease you space,lend you money,or provision your restaurant.

No, He'll stick around

For most high profile restaurants there is an operator company which handles all the heavy lifting of building the facility and running it or perhaps licensing the concept out to other groups less creative. They will partner with Todd English to get his name on the door (eg. "Foodstuffs by English") and he'll design a few "signature dishes" once or twice a year. He'll be the face of the concept but you won't see him working in the kitchen, apart from a few press photos.

The operator will be the one to get the loan, hire the designers, etc. If the concept tanks the operator might drop english and his name, re-theme, and try again.

So while he might not be building any new locations with his own dime this is definitely not the end to English, sadly.

you are so right. I opened MXDC a new restaurant near the white house in DC as a manager. It was sold to me as a Todd English restaurant but I only saw him once in a 2 day span when we did our soft opening. He posed for a few pics, then never saw him again. Behind the curtain, it looks like he got a local restaurant owner to get the space, put up the $, and run the day to day and he only lends his name. It looks like this may be his only options for restaurants. unfortunatly, this venture will fail, (check out the review by washington post Tom Seistsma) the reviews speak for themselves.... Also that space has failed 2 previous times...... Good luck Chef English, looks like you are going to need it

There is always 2 sides to every story

There is always 2 sides to every story. Funny how people can pass judgement reading an article taking everything written in it as "the truth". Who is more shady? A real estate developer? A celebrity chef? A landlord? A lawyer? Time will tell...

Do you think these judgements

Do you think these judgements come from this article alone? Please. Hit up google and see how many business partners Shady McEnglish has left in the lurch. If you think there is a second side to the story, kindly present it so that we can mock you mercilessly.

I'm one of the people lost in

I'm one of the people lost in this war of egos. I worked the kitchen at Olives for the last year. Went in last week and was told to leave. I want to thank both Mr English and Mr Carey for having such big egos that neither one of them could get over themselves for a second to take us peon employees into consideration. English is the worlds worst business man as laid out by adamg above but Mr Carey should be ashamed of himself for not giving employees a little notice he was going to change the locks and put us out of jobs after getting a court to hand down an eviction notice several months ago. I don't buy the argument Mr Carey makes that he was afraid of the place getting trashed like Kingfish Hall. I thought I saw pics of a clean Kingfish the same day the story came out. FU to Todd for not taking care of finances but a bigger FU to Mr Carey for being a typical d-bag with alot of money and not thinking of the little guy.

why an FU to the landlord?

why an FU to the landlord? Todd English has the money to pay the rent, he just isn't doing it. The landlord has to pay taxes, insurance and other and other expenses whether or not he gets his rent. Mr. English is making money and not seeing to it his rent is paid, and as a result you no longer have a job. English is responsible to you for that - not the landlord who only rents the space.
Perhaps there is a back story that we are not aware of.

I am going off what I read in this piece by adamg. Mr Carey had an eviction ruling in the fall, held the cards until a random day in June where without warning locks the doors and puts many good people out of jobs. Now Mr English is eventually responsible for this but why not come to an agreement where the little peon hourly workers can prepare, move out personal belongings, maybe try to get something else set up? As Carey had it we had 1 hour the next day with what looked like Sherrifs deputies watching us like we would loot the place. Can I just get my knives, shoes, clothes out of my locker without feeling like a criminal. Sorry but we little guys got screwed and what I take from this article is that Mr Carey held and holds all the cards so yes FU to him.

I am disgusted by the whole thing. The employees of Olives are all wonderful, decent and very loyal. I am sorry to say that did not go the same for employer...Todd you knew what was coming for too long and did nothing. I am not sure how anyone could function normally, vacation or be at all self indulgent as so many lives are being affected by your choices.
It is not a crime to have something just not work out. It is a crime to pretend and build a "ponzi like" scheme in order to maintain some fake image/lifestyle whatever you want to call it and then have it hurt so many. We all love you the artist/chef, scale back and take ownership of the sh#tshow and deal. You will sleep better.