Under the new Deck 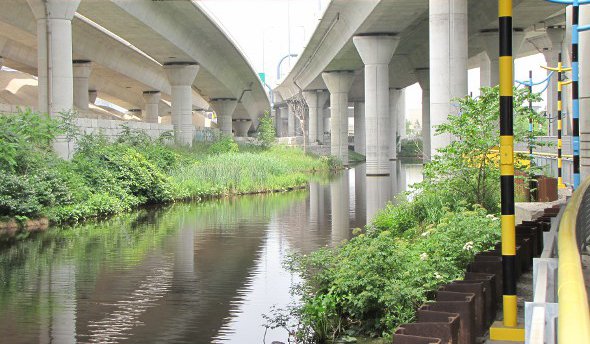 The river, once a largeish harbor estuary that ran into Cambridge and Somerville, now starts at the Charles under the Zakim by the equally Big-Dig funded Paul Revere Park and ends roughly at the Bunker Hill Community College parking lot off Rutherford Avenue - and you can follow a path along much of that.

If you enter from the Rutherford Avenue side (the entrance is just south of the parking lot - you can't miss the Seussian light fixtures), one of the first things you come across is a statue of sacks of potatoes: 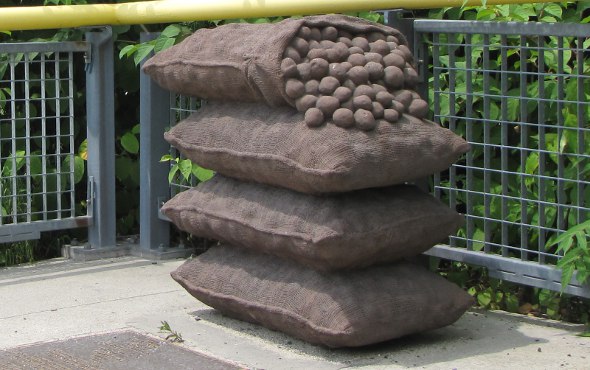 The statue harkens back to the days when what is now the college parking lot was filled with sheds into which workers offloaded Maine potatoes from trains from up north. That all ended with a big fire in 1962 - the area smelled like roasted potatoes for quite some time.

The walkway that goes by the potatoes is etched with numbers marking the one-time depth of the river at those points: 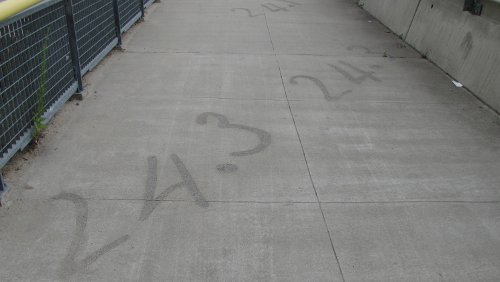 As you can see from the first photo, there's now actual vegetation along the banks of what used to be an incredibly polluted creek - one slaughterhouse just dumped its offal right in. 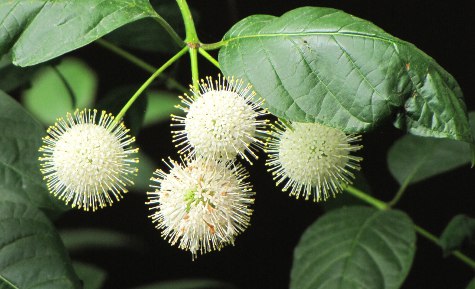 Although the river's cleaner nowadays, one thing that won't be coming back are the oysters that used to grow there. They require salt water, which is now blocked by the Charles River Dam.

That there is any green at all is kind of amazing given that the river is covered by highway ramps and the I-93 connection between the Zakim and the old Deck and surrounded by train tracks and a sand and gravel plant. 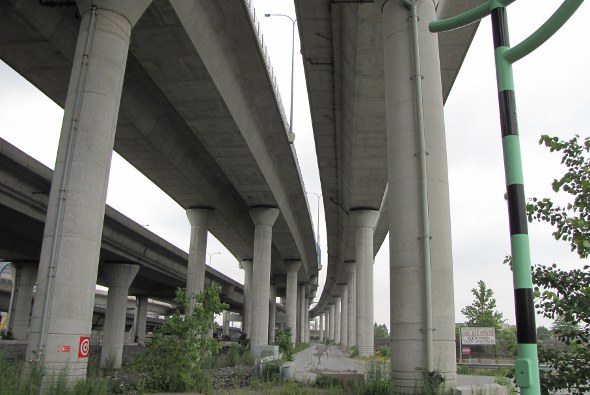 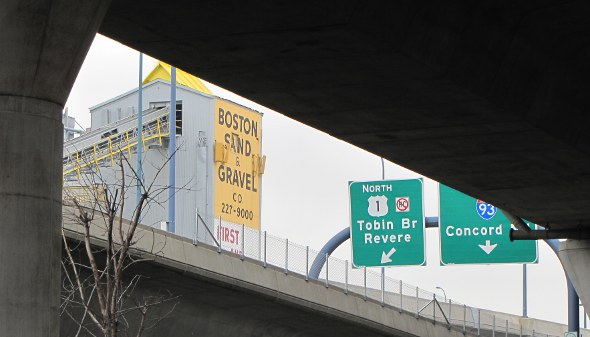 A swoopy new pedestrian bridge links Paul Revere Park to parks on the Cambridge side of the Charles: 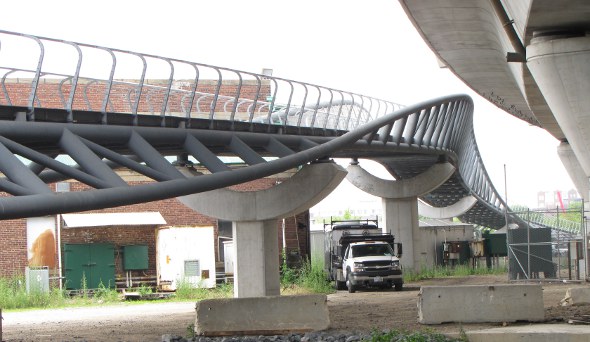 One of the first things the state did when it started down the road of replacing the Central Artery was coming up with an official name and logo for the project, which today you see only on the odd manhole cover:

Getting there: Take the Orange Line to Community College, then walk towards downtown Boston on Rutherford Avenue. Or walk through Paul Revere Park under the Zakim and look for the path.

At the other end of the Big Dig:
The end of Fort Point Channel.

This was really nice. Thanks

This was really nice. Thanks for posting it.

Yes! I enjoyed this piece

Yes! I enjoyed this piece immensely. Thank you!

Thanks! This was pure serendipity

I didn't even know this place existed.

After a morning at Licensing Board hearings at City Hall, I usually walk to Back Bay or South Station, get something to eat and come home. Yesterday, I figured I'd walk to Community College instead because, well, because I'd never done it before. As I was walking up Rutherford, I saw these weird light fixtures and went to investigate ...

I ride by daily

On my way over the bridge. I never see anyone use this at all. EVER. Too bad. Looks pretty. One day I'll stop and walk across myself.

my cousin also rides it

my cousin also rides it daily. there are users, and it is pretty. As New Lechmere goes in and new developments spring up i bet it'll get a lot busier.

I have been wondering where

I have been wondering where the walkway next to the Rt 1 onramp off of rutherford went! I'll have to go check that out with my gf soon!

Never forget me! But, at

Never forget me! But, at least I went out in a blaze of glory.

... but East Cambridge didn't smell like bacon for days because you had been shut down & abandoned for some time. Now if you had gone up at the same time as the potatoes, the Hub would have smelled like homefries. My mother's family-- the Italian side of the typical Boston mixed marriage (Irish & Italian) whence I came --hailed from East Cambridge & my great grandfather worked a second job as a night watchman at Squire's. My relatives from that neighborhood always referred to a fat baby or overweight adult as "as fat as Squire's pig".

Someone needs to invent

Someone needs to invent freshwater oysters

under the new deck

the light fixtures, elements on the fence, etched river depth markers, the information about the place and other elements- like the swing lights up above under the expressway at the Paul Revere Park entrance were all designed by the public artist Ross Miller. The potato sculpture was done by one of the workman from the Big Dig who made it on his off time to commemorate the Maine potato cargo. Who ever made that sculpture was a highly skilled mold maker -

My former Urban Infrastructure professor (Ian Baldwin) actually wrote a piece in ArchitectureBoston about the space below the highway ramps, which he titles: "The unplace."

It's a great short read: http://www.architects.org/architectureboston/artic...

Any pictures of the Seussian light fixtures?...

Any pictures of the Seussian light fixtures?...

OK, not truly Seussian, because if they were, each would be bent and curved at uniquely odd angles, but something about the colors and the stripes reminded me of Dr. Seuss.

Rather than Dr. Seuss, Pipi Longstocking always comes to mind whenever I see those lights.

Another feature not mentioned in the story is the pattern on the fence panels; there are leaves embedded in some of the grid spaces.

always wondered what they were

they remind me of the barber shop. nice walk with barely anyone there the last time I went, creepy but peaceful.

That ramp always strikes me

That ramp always strikes me as rather dystopian -- a perfectly smooth curve hemmed in between two fences, disappearing in the distance where you can't see it, with custom lamp posts someone thought would be whimsical alternating in a perfect green-blue-yellow pattern.

Granted it's a tough site for a park. But it's not exactly a welcoming design for a public space. Maybe that's why I've never seen any people using that path.

connects to North Point Park in Cambridge, which you should also peruse with your camera, lovely canals and foot bridges wind in and out of interesting plantings and such...

Oh, you are so right

I need to get back there now that it's not largely closed off so that EF can bring Passion Pit in to celebrate the groundbreaking of its new offices.

Tip: the area is way cooler at night.

I stumbled across it last December

A friend and I went out for a walk and accidentally ended up circumnavigating the city. We wanted to check out the new bridge over the tracks and didn't really know where it led.

We found the bit directly across from the Garden to be extremely spooky. Not in the "you're going to get mugged" sense, but we had the feeling we'd stepped into a dystopian '70s sci-fi movie - which was fantastic.

Isn't this where the promised skate park was supposed to be?

Isn't the area under the bridge where the long promised but never delivered skate park is supposed to be?

So not the Millers River stretch.

near the new EF building.

Proper usage of the walkway,

Proper usage of the walkway, and underside of the bridge:

Dog walkers avoiding a park in Charlestown after dog dies
Scene from an Affleck movie unfolds on the streets of Charlestown: A heist, a chase, a suspect from Southie - and a truckload of live lobsters
Cars to replace school buses at Sullivan Square parking lot
MBTA admits Orange Line shuttle took passengers away from the Orange Line after first telling passengers they got on the wrong bus
Orange Line replacement bus turns into casino shuttle for some riders
Don't bid until you see the whites of their eyes