On this day: 492 dead in nation's worst nightclub fire 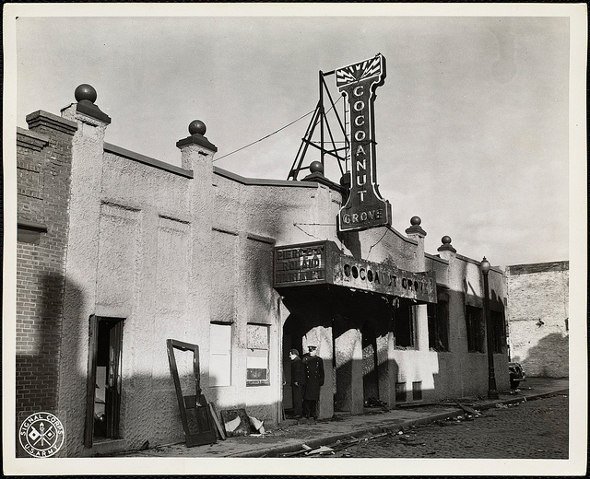 Remnants of the fire.

The Boston Public Library has a collection of photos of the aftermath of the Cocoanut Grove fire on Nov. 28, 1942.

Although not as great a

Although not as great a disaster, another significant Boston night club fire , Blinstrubs ...

On the corner of Broadway and D streets in South Boston, is a Burger King and a McDonald’s. They have fast food cheap. Stanley Blinstrub wouldn't be too upset to find out two fast food places have taken over his spot. When he opened Blinstrub's (often minpronounced charmingly as Blinstrum's) in the 1920s, he too offered fast and cheap food; a nickel for a sandwich, a quarter for supper.

Stanley Blinstrub was a 20 year old working for dad and feeling sad. The Brighton kid caught wind of a restaurant that had closed in Southie and decided to go for it. With hard fought family financial backing, the young mensch began fulfilling his dream.

The place caught on and soon there was a 350 seat night club next door to the restaurant. It got real hot real quick. A guy from Southie knew he could grab grub and a boilermaker for chump change. And the general public knew there was showcase for the greats right in Dirty Old Southie. On Broadway, the restaurant bloomed into Blinstrub's Village and became one of America's largest and finest nightclubs with seating for nearly 2000 who came to see top shelf entertainment.

This was the Golden Age of the Glittering Nightspot. New York may have boasted the Copacabana, but Boston had Blinnie's Village. Frank Sinatra, Robert Goulet, Tony Bennett and Patti Page played Blinstrub's. Johnny Mathis was sold out for two shows a night for two weeks. 160,000 had to be turned away. Jimmy Durante called it his home away from home. Wayne Newton caught his first break there. The Three Degrees, one member from Dot, premiered there before their glory years in Philly. The top entertainers got up to $20,000 a week-- in cold hard cash. Blinstrub's, it seemed, could do no wrong.

Ah, but the hottest fever cools. Those who won't face that fact are fools. Because like all things, time must overrule. The Golden Age would turn to stone when on February 7, 1968, the uninsured Blinstrub's was destroyed by fire, never to reopen in South Boston. For locals of a certain age, Blinstrub's was a name like Jordan Marsh, or Anthony's Pier 4. Even if you never went, you knew the name, You knew it was a big deal. Would today's newcomers to the city guess that Boston's leading nightclub post-World War II right up to the Viet Nam era was located in South Boston?
http://www.boston.com/blogs/yourtown/boston/dirty-old-boston/2013/08/_en...

No McDonald's in Southie.

No McDonald's in Southie.

No McDonald's in South Boston - Yes,

And, Blinstrub's was on the site of the Shell Station on the easterly side of Broadway and D, not on the Burger King site . Good story, just your location was off a bit. Even by clicking through the photos attached you can see the rise of Broadway which begins a D.

Let's hope that that the BK and gas station make way for more residential housing with ground floor retail soon, as a great corner (in terms of road intersection) should.

I didn't write the story ,

I didn't write the story , and I guess I didn't read it too good either. My familiarity with that corner and abouts is that I remember being told there was a Narragansett distributor , George Doran , that was close by to Blinstrubs , and there was Whitey's bar ( not the one you think it is ), then the Pen and South Boston Cafe. Mickey D's who knew , I would go to Joseph's for grub anyway. Haven't been over that way in a while, not including Castle Island.

Blinstrubs did open a restaurant in Dorchester after the fire. It closed in 1989 and is now The Philips Old Colony house.

Not sure how I would feel

about living in a building on the site of nearly 500 deaths. It looks like a great building though!

The HoJo AKA Radison AKA Revere hotel already covers much of the site of the original coconut grove.

People flocked to Avalon Danvers and live in the old Kirkbride buildings. And lots of questionable stuff went on there at the turn of the century.

At least at the Cocoanut Grove the building was demolished vs a gutted structure like the Kirkbirde.

If I remember correctly, however,

Dorgan's Restaurant, another renowned Southie restaurant and landmark there, also suffered the same fate as Bllinstsrub's: It, too was destroyed by fire, only sometime in the mid-1970's, never to re-open.

the va hosp in white river jct vt then w roxbury va training as a nurse 39 - 45.

she saw pearl harbor victims. it was mentally devestating to see a tragedy like

this at a time of war. half of victims or 40 percent were in the service. her friends

broke his leg and was tending to him. i worked at marios restaurant after high

of the fire. the employees went there for pasta or meatball sandwich for a quarter

for welansky charged a buck a meal and took it out of their pay. stingy.

dreams. it was a class place you had to save for months to afford it a drink was

i'm trying to fill in some blanks and gather what ever info there might be . to some family stories if you would email me. i would appreciate it thank you.
noreen collins