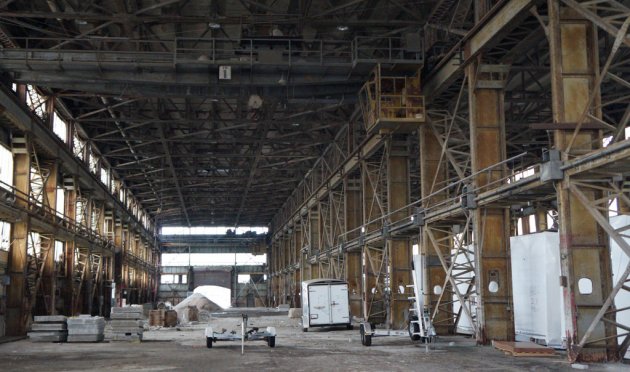 Fans of the old industrial look could do worse than just drive down Northern Avenue (or take the Silver Line) on a quiet Sunday morning and then walk around the Boston Marine Industrial Park (this morning, I parked across from Liberty Wharf and then just covered the waterfront).

One of the more interesting buildings from the area's history as the South Boston Naval Annex, is what the BRA now calls Parcel N at Fid Kennedy Avenue and Capstan Way- a large hulk of a no-nonsense building, except for the almost decorative touches around its main and rear doors: Last month, the Economic and Industrial Development Corp., the BRA unit that oversees the marine industrial park, sent out a solicitation for bids for the building. Unlike a vacant nearby parking lot, destined to become an "innovation" office building, EDIC said it wants to retain the building's industrial history:

EDIC encourages proposals that further its commitment to promote maritime economic development and the retention and creation of job opportunities all within the existing zoning and regulatory framework. Explicitly forbidden uses include residential, hotels/motels, healthcare, recreational boating, sports and entertainment and general office. Said forbidden uses are not under any circumstances to be included as part of Parcel N redevelopment plans.

Preference will be given to a developer that would rent the building's large first floor, which still has a train track running through one side (although it no longer connects to anything) to a single tenant. If somebody could transform this into a more polished, urban-chic event space and obtain a liquor license, it would do so well. I photograph weddings in both Chicago and Boston regularly and Chicago has a nice makes of modern and traditional spaces. There are so many brick and beam warehouses in Chicago that have successfully profited off of the rustic charm that has so much character. Take a peek at Gallery 1028 on Chicago's Goose Island as a prime example. Aside from the Artists for Humanity Epicenter and the Cyclorama, Boston has a definite void in the area of non-traditional event spaces for social and corporate bookings. Over the last 10 years, other major cities have been transforming billboard factories and other salvaged warehouses into jackpots. I've always wondered why Boston hasn't gotten on top of this. Does it have to do simply with obtaining a liquor license?

This is a really interesting idea. I'm not sure if the zoning of the area would allow but we definitely could use more non traditional venues in Boston!

Neat idea. I'm thinkin it would be a great place to have a Rave! (okay my age is showing..)

One of the mandates of the EIDC is the preservation of maritime and light industrial jobs. This is a city owned parcel within an industrial zoned area. Saying that it won't be condos makes it sound like some Tent City level sit in was done by noble Jane Holtz Kayianites.

This building would have been dust years ago if it was in private hands.

Yes, the headline was a bit hyperbolic

But come on, please don't tell me that when you think "South Boston waterfront" and "development," your first thought is about the industrial park and not "luxury condos" or "expensive new office buildings."

Maybe one of these days, I'll wander around Widett Circle before it becomes the Olympic/NE Revolution stadium.

Unless I'm completely misremembering the event, when the USS JFK made port in Boston that final time, the security line snaked though the building. It was kinda neat to see the inside of the place while we waited, it would be great if a small part of that areas past was preserved instead of forgotten.

Its last use was to store materials for the Big Dig. Across the street is a building that still has this sign up: Right behind it is another building with a sign warning only Bechtel personnel allowed beyond that point.

Maybe a Brewery could go here

Could this space host a new brewery or a several breweries/distilleries?

Harpoon is a couple blocks away.

Also kind of cool: When I walked past the Au Bon Pain plant across the street, the area smelled like fresh-baked bread.

Did you notice the constant bird cry in the area? I was told that it is a recording of a distressed bird and it is supposed to keep gulls off the roof.
I have noticed it too. I don't know if it's a myth or not, but it makes sense.

I did, and it was weird

Seemed to be coming from a loading dock on Fid Kennedy and I kept looking for the bird making such a loud ruckus!

That's pretty "explicit". As John pointed out, the area must remain 25%/75% (ugh, or is it 30%/70%) "maritime" uses (etc.). I was SHOCKED when I heard this a couple months ago at a BRA meeting. (I was even more shocked to hear at a subsequent meeting that several board members seem clueless about this.)

I have a client ready, willing, and able to open the "nightclub/restaurant/bar/concert hall" (and ... barber shop) you are looking for, but there's no chance he could.

This would be an awesome

This would be an awesome replacement for the Channel. We need more venues for local music. Too bad zoning can't be changed. (Insert snarky comments here).

Boston hardly needs another "nightclub/restaurant/bar/concert hall" and doubly so in that area. Needs more industry, and the site is zoned for such, so see no problem.

I must have missed the memo where BlackKat was appointed to the Head of the "What Boston Needs" committee. If there's someone willing to rent the space for that use, there's a good chance that he/she sees the "need" for a nightclub/restaurant/bar/concert hall at that location. Let the market dictate what is "needed", not BlackKat.

But if the City of Boston owns this building

they can decide what uses they want to lease it out for.

The Market Is Broken

Although I freely admit I believe this city could use some central planning [by me]. The alternative of just letting the market do what it wants is hardly sane.

Letting the market do what real estate investors want is how we got in this mess that is the current real estate climate.

One should also note that concentrating ones development in an area that is soon to be underwater is not exactly wise. Nor is building a "nightclub/restaurant/bar/concert hall" somewhere with no MBTA access as it just promotes drunk driving or alternatively bolsters a corrupt and Eco-unfriendly system of taxi and livery use.

You lost me at "central planning", comrade.

What kind of industry?

Do you have any suggestions? You could put together the financing for such a venture and make a bid for the space.

Naval Annex in it's post-war heyday

BTW, in terms of innovative uses for such spaces:
http://en.wikipedia.org/wiki/Titanic_Quarter,_Belfast

Lots of violations of the BRA edicts here but the Belfast complex is much more vast.

I think this building is a bit too close to the Logan flight paths to be useful as a sound stage but sometimes it pays to think outside the box: http://www.theguardian.com/uk/2011/dec/28/northern-ireland-game-of-thrones

And one last link. If you like the vibe around the Naval Annex you might enjoy a picnic at KO Pies at the marina/boatyard on Marginal St. in Eastie: http://kocateringandpies.com/gallery/nggallery/east-boston/east-boston/

For the win! It's a way cool place that shows how both working industry and art can co-exist.