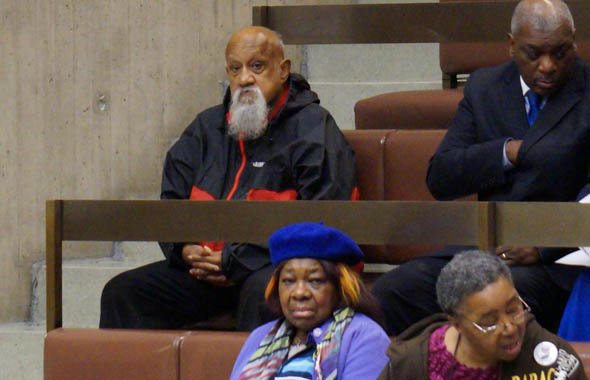 Among those who attended to support Yancey: Former Councilor Chuck Turner

The City Council today approved a proposal to spend $120 million to build a new high school in Mattapan, for which Councilor Charles Yancey (Dorchester) has been fighting for close to two decades.

The proposed borrowing for the work will require a second council vote in two weeks and approval by Mayor Walsh.

The council voted 9-3 in favor of the plan, which Yancey said would give long-suffering Boston high-school kids their first 21st-century school. He rattled off the names of numerous suburbs that have built new high schools over the past few years - Newton North in particular - and said it's not fair that Boston students have nothing comparable.

Also in support of the plan: Former City Councilor Chuck Turner, who made his first appearance in the council chambers since December, 2010, when the council expelled him after his bribery conviction.

Council President Bill Linehan welcomed Turner to the chambers and praised his work on behalf of schoolchildren. The council then rose to give Turner a standing ovation.

Councilor Mark Ciommo (Allston/Brighton), chairman of the committee that considered Yancey's plan, had urged councilors to hold off on any vote until after BPS completes a $2-million study of its overall facilities needs. With so many students already in substandard schools, he said, it makes little sense to throw so much money at a building that could not house them all, at least until after the city figures out a rational assessment of its current space at the secondary level.

However, Ciommo was joined only by Linehan and Frank Baker (Dorchester) in voting to take no action on the plan for now.

Yancey's plan would call for creation of a campus-like high school on a 20-acre parcel at the old Mattapan State Hospital.

Baker said he is not opposed to the idea of a new high school there, but that he wants to see what other needs and resources BPS has for high-school students.

What a boondoggle. Put Madison Park in order, 'modernize' it,if necessary, not build this thing. BPS is such a joke, and these community 'advocates' are embarrassing to watch.

Whoever gets Madison Park should look to Worcester Tech

Your gripe belongs with the city council, for foolishly voting for capital spending the school committee hasn't requested. I agree with the three who voted no -- let's wait for the data. If BPS asks for this school, then we can have that debate over whether it's needed (probably) and what to do regarding other facilities issues.

you take away from your relevant, strong andvalid opinions by not stating who you are.

Someone tell TITO Chuck wants his job back.

Can you pass some of that? And not in this lifetime. The fact that you may have a point and a silly thought like that can actually gain momentum just shows how far we have yet to go.

Forget about the bridge and

Forget about the bridge and the school. Move Long Island operations to the old MSH grounds. Solve that problem first !

Uh, no! No thank you. We have more than our share of mental health and shelter group homes in Mattapan already. This high school idea is so dumb. They want a new school when they WON'T fix the existing ones. A new building will not fix the problem.

WE ALREADY HAVE A CAMPUS

WE ALREADY HAVE A CAMPUS HIGHSCHOOL IT'S CALLED MADISON PARK! FIX IT FIRST FOOLS!

Technology! Has the Council

Chuck Turner -- not behind bars?

Isn't that criminal Chuck Turner in jail, where he belongs?

He did his time

And now he's out. Try to deal with it.

Why hang out with crooks,

Why hang out with crooks, liars, and cons in prison when you can do so more comfortably at City Hall or the Statehouse?