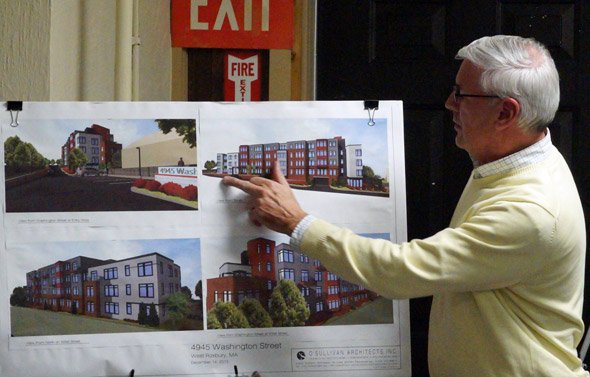 Developer Ralph Vacca wants to replace the old Todesca garage at 4945 Washington St. with a four-story apartment building with 46 units and 67 parking spaces.

For the second month in a row, Vacca, his architect and his attorney met with the West Roxbury Civic and Improvement Association tonight to go over the proposal before they submit it to the BRA and the Zoning Board of Appeals.

The apartments would be split between 1- and 2-bedroom units. Vacca estimated most of the units would rent for $2,000 to $2,200 a month, which eased the worries of association members about the wrong sort of people going in there - as did Vacca's assurance that tenants would be barred from subleasing their units.

Six of the apartments would be rented at some amount less than that as affordable apartments.

Vacca's attorney, Joe Hanley, said Vacca has already had contractors on the site to clean up contaminants.

His architect, David O'Sullivan, said the rear of the building would only be three stories tall, as a concession to the neighboring Stony Brook Condominiums, where residents worried the new building would cast a shadow on some of their units and pool.

O'Sullivan said the roof of the three-story section will be "green" - covered in plants.

He added that tenants and guests would enter and leave via the existing Todesca driveway. Parking would be in both a garage under the building and in spaces along the driveway.

I was about to go on a whine and then realized that crapitecht David O'Sullivan already had a response for me in the photo.

Boy do I feel shut down.

I didn't notice it until you pointed it out. Can't say I blame him, really... his original proposal was more than reasonable, but the NIMBY squad came out in force and sent him back to the drawing board. 67 parking spots for 46 units? 4 stories is too tall, lest their precious swimming pools be shaded? "The wrong sort of people" moving in? Christ. If it were me, I'd have shown up with one of those big foam rubber hands, with the proper finger extended.

That's a good one

Have you been to that part of West Roxbury? Have you seen what's on that site now?

Pretty sure that post was an attempt at sarcasm.

I think it was a pretty good 'attempt', too.

And yes,I know that part of West Roxbury, Washington St. corridor very well; used to live there, and frequently drive through it to get to and from Rt. 1.

But as somebody who drove down there regularly, you know that's the part of West Roxbury the rest of West Roxbury would prefer to ignore - where most of the apartments and condos are. I'm not sure one more building is going to be the tipping point for that stretch.