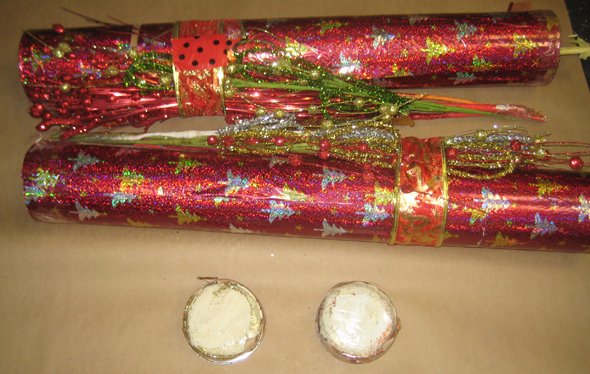 A Randolph man was arrested for cocaine trafficking in Dorchester yesterday after authorities say they intercepted a UPS package for him bearing more than 200 grams of Colombian cocaine wrapped in Christmas paper.

Nonson Obiora, 27, was arrested yesterday afternoon at a Dorchester house after he arrived to pick up the package, the Suffolk County District Attorney's office reports.

According to the DA's office, workers at a UPS facility in the area spotted the package last week and contacted Customs officials because something about it struck them as odd:

Its manifest listed the contents as "Christmas decorations," and it contained two cardboard tubes wrapped in glittery foil. CBP agents observed that the ends of the tubes were heavy and solid. They removed the bases and found that they contained a total of 230 grams of a powdery substance that tested positive for cocaine. The package was resealed and forwarded to the Boston ICE field office.

A resident answered the doorbell, saying that “Velasquez” had said she could accept the package for him. When she signed for it, she was informed that it contained a large quantity of cocaine.

Based on the resident’s statements and other corroborative evidence, investigators allowed her to contact the intended recipient by text message and make arrangements for him to

According to the DA's office, Obiora has a prior conviction on a charge of possession of cocaine with intent to distribute. Also, police found 5 grams of heroin in the Lexus hybrid in which he drove to Dorchester.

Neighborhoods:
Dorchester
Topics:
Crime
Ad:
Like the job UHub is doing? Consider a contribution. Thanks!

Transit Police officer gets probation after admitting he beat a homeless man at Ashmont station then lied about it
Citizen complaint of the day: Leiningen vs. the rats in Dorchester
The last of the storm moves out
Man shot to death on Norwell Street in Dorchester
You know what Red Line riders want? No more delays on the train from Ashmont
Barefoot man in ski mask was running down a Dorchester street with a loaded gun 45 minutes after three were shot there, police say