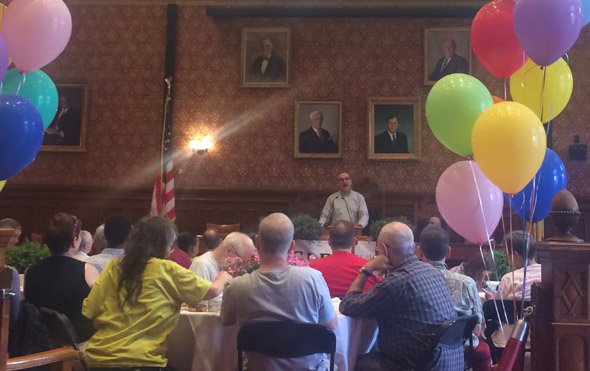 Former Cambridge Mayor Alice Wolf remembers the day 25 years ago when she opened the doors of City Hall for the city's first Pride Brunch.

"This day 25 years ago was, as an elected official, perhaps one of the most emotional days for me," Wolf said this morning at what is now an annual event. "Many people of the GLBT community walked into that front door of Cambridge City Hall and started weeping. It was just amazing. The emotion that this generated was so heartfelt and it meant so much." During the brunch, the Cambridge GLBT Commission presented awards to individuals who have made outstanding contributions to advancing equal rights for the GLBT community. City Councilor Denise Simmons presented the Bayard Rustin Award to Quincey Roberts and Corey Yarbrough, co-founders of the Hispanic Black Gay Coalition (HBGC), an organization to address the unique needs of GLBT people of color through activism, community outreach and counseling.

Cambridge GLBT Commissioner Lesley Phillips recognized Robyn Ochs for her work as an educator, speaker activist and writer on bisexuality. Ochs' colleague and close friend, Marcia Deihl, was also recognized posthumously. Deihl, an activist for queer, feminist and racial justice, was killed in a biking accident in March.

Two Cambridge Ringe and Latin students, Molly Katz-Christy and Andy Robinson, also received awards for their involvement in the school's gay-straight alliance and education of their peers about GLBT acceptance and support.

Speakers and award recipients proudly celebrated the advancements in GLBT social justice, from the expansion of what was once called "gay rights" to include lesbian, bisexual and transgender, to when Massachusetts became the first state to grant same-sex marriage licenses, in 2004.

GLBT Commissioner and ceremony co-host Mal Malme shared her memory of that night saying, "It was one of the most incredible, moving experiences that I've ever been to. To have a city hall open at midnight spoke enormous volumes to their commitment to making sure Cambridge is a place for everyone."

Speakers were also sure to remind the audience of the disparities that still exist, however, even in a progressive state like Massachusetts: stabilized HIV rates in black and Latino communities, underrepresentation of people of color in GLBT rights leadership roles and high rates of GLBT youth homelessness.

At the conclusion of brunch, Mayor Maher thanked guests and invited everyone to take a bus to Boston for the Boston Pride Parade.

"Everything seems to be going the right way [for GLBT rights]," the mayor said. "But don't forget that there were a lot of folks out there that were trailblazers. They really fought the good fight and for that we say 'thank you' and you've got our undying gratitude."

Like many groups that fight prejudice in our metropolitan area, groups can develop unjust prejudice within. The unjustifiable prejudice isn't recognized within or ignored. This is the case
a) #WickedPissed: Activists Hault Boston Pride Parade for 11 minutes
http://www.therainbowtimesmass.com/2015/06/13/wickedpissed-activists-dis...

b) Some old motss folks vicious, bitter, and hysterical.

c) The Gay Shame movement calls attention to not unrelated concerns that could garner greater force for the better of our communities' constituencies
https://en.wikipedia.org/wiki/Gay_Shame

Alice Wolf, Forgotten but not Gone

She was a state rep back when Finneran was Mistah Speakah. You know, before he was indicted and convicted in that little gerrymandering thing that was effectively representational red lining of black communities.

Anyways, he was about to lose the speakership due to term limits, and needed votes in the house to keep the seat. So he could continue to serve us all so effectively.

Alice Wolf sold her vote. Finneran kept the seat. She got another "legislative aid." Such a wonderfully progressive woman!

Court blasts Harvard for the way it treated a woman whose ancestors were stripped half naked for photos ordered up by one of its more notoriously racist professors
MIT researchers build robot fireflies
Serial bank robber who only got out of prison last month is nabbed for Cambridge bank robbery this afternoon, police say
Two Boston men cross the river for a gun battle in Cambridge; one crashes car in Somerville, police say
World's largest chicken nugget made in Cambridge
Solid