Pickup becomes ball of fire on the southbound Expressway 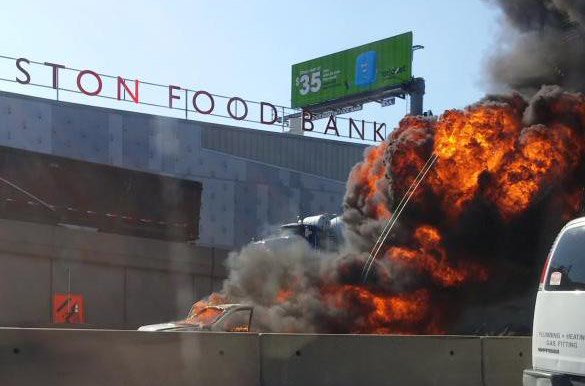 Jarvis passed by this ball of fire on the Expressway shortly after 3 p.m. Why does this never happen to my car?

Its worth more for insurance value than sale or trade in.

The driver would be lucky to escape this uninjured.

What are the rules?

Adam, I always see tv news outfits asking permission to use twitter photos. What are the rules on when you can use a photo? I also see you reference Creative Commons. Maybe you can answer this when you have a few spare hours. :)

In a technical sense, the

In a technical sense, the photos are the copyrighted material of whoever took them. I'm no copyright lawyer, but certainly asking for permission to use the photos would be the professionally courteous thing to do.

which I see as the photographer telling Adam "please, use this photo."

Not necessarily, I tag Adam

Not necessarily, I tag Adam fairly often when posting relevant photos, he always asks me for permission when he wants to post them on the website, which is the correct way of doing things.

Intellectual property, such as photographs, are just like regular property, you made it so its yours, no one else can use it without your permission. Of course there are ways of giving permission that don't involve someone having to ask you for permission, usually through some sort of licensing or submission agreement (for example: posting to the UHub group on Flickr lets Adam post your photos on the site as he sees fit).

Ah, folks who shoot for money

Although I just wrote (see below) about how I used @universalhub on social media, folks who I do know are professional photographers - or folks who have made some money with photos - I'm more likely to ask on top of the tag.

Probably the best thing is to ask

Both for copyright reasons and simple courtesy.

However, I've long had a shorthand with folks: If you tag a photo as @universalhub on social media, put it in the Universal Hub pool on Flickr or e-mail it to me, then you're giving me permission to post a copy of the photo.

In cases where somebody has not tagged a photo that I might like to run, I'll either ask them, use the particular platform's embed feature (which reproduces the photo and the person's comments exactly as they posted/wrote them), or, sometimes, just link to the photo.

Oh, there's also the case of photos whose users have explicitly given Creative-Commons permission to use them they way I use them, i.e., for posting on a Web site, rather than, say, compiling them into a book and selling that (all those wonderful Leslie Jones photos at the BPL, for example).

The Creative Commons thing is specific to Flickr. A number of years ago, I asked a group of folks who were posting Boston photos on Flickr on a regular basis what they thought of me maybe paying something (given my budget, not much) to folks whose photos I used. The answer I got was basically they'd rather have me continue to give them full credit and to note the photo was copyrighted or used under a particular Creative Commons license. So I always note that on photos I get via Flickr.

I thought it was the Food Bank that was burning. They are too important to burn up.

Do we know what happened to the people in the car?

Driver got out OK

Re: Driver got out okay

Thank God. That fire looked bad. Thank you for the update.

It's bad enough you read the paper, check your email, send texts, put on makeup and change pants while driving, but maybe the pig-roast-for-one can wait until you're home?