Chinatown block gets even Chinatownier, if only for a little while 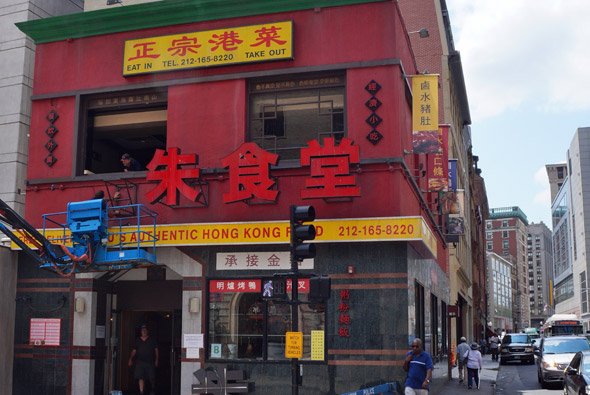 What happened to the Japanese hot-pot place that used to be here?

So they're filming the Ghostbusters remake in Boston, which, of course, has to stand in for New York, because, well, that's what the Keymaster demands or something. Today, a half block of Harrison Avenue at Essex was made more Chinatownier for the movie. In 2012, the city condemned the building at 25 Harrison Ave.; seems it was missing a few of the bolts that held up the floors. Who ya gonna call? A half-block up and you were suddenly reminded again what city you were really in:

I don't think 165- (or any other exchange beginning with 1) exists in any area code. Seems like an odd choice that screams "fake phone number".

If you need a reason not to

True, they usually use a 555 number, which is also fake. Maybe they decided 1** sounds less fake. I think you can't use a 1 at the beginning of an area code or exchange number because that is the cue for long distance and the direct dial system or some legacy systems might get confused.

Someone here knows for sure. Elmer?

This is most likely the case because, for landline phones, 1 is the first digit you dial to connect with a number that has an area code different from yours.

Also, I recall reading many years ago that Holywood deliberately uses fake phone numbers that will get you a "this number is not is service" message, to avoid people getting crank calls. I'm sure that, back in the day, Ma Bell had a big hand in encouraging this practice.

used to have a list of permanently-unassigned phone numbers to give to movie studios and the like who didn't want to use the obviously-fake "555" exchange in movies. I don't know whatever happened to that practice.

she got the ill communication!

I don't think movies or TV shows go for reality when it comes to phone numbers. Think how many use that fake "555" exchange which everybody know isn't real. It might also be that the sign will be seen from a distance with the 1 not clearly visible. There are lots of signs in movies that look realistic from a blurry distance but in reality are prop signs with just a jumble of letters on them.

No, Dotnet is correct, no area Code or exchange cannot start with a 1 or a 0.

I thought it was because 1 told the switch that you were dialing a direct long distance number, and zero meant you needed an operator assisted long distance call (typically international or collect), however wikipedia says differently.

In the late 1980s and early 1990s, the NANPA implemented calling procedures that required all long-distance calls within an area code to be prefixed with 1 in an effort to make it possible to assign central office prefixes with 0 or 1 in the middle position. As it had nearly run out of area codes using the existing assignment methods, it allowed the assignment of area codes of the form N10, such as 210 in the San Antonio, Texas, area and 410 in eastern Maryland. Therefore, someone calling from San Jose to Los Angeles before the change would have dialed 213-555-1234 and after the change 1-213-555-1234, which permitted the use of 213 as an exchange prefix in the San Jose area.

But as far as 555...according to this wiki article (which I also didn't know) it says

In 1994, the North American Numbering Plan Administration began accepting applications for nationwide 555 numbers (outside the fictitious 555-01XX range). A number could be reserved in a single area code, a region or nationwide.[11] In theory, a consumer from any area code could be invited to dial a seven-digit number such as 555-TAXI and the owners of that number could connect the call to a local car service. However, according to a 2003 New York Times article, the desired functionality requires the cooperation of local phone authorities, and most phone companies have been reluctant to cooperate.[12] Despite the fact that the service is virtually unavailable so far, most of the available 555 numbers have already been reserved.

(yeah yeah I know wikipedia.. but in this case, it's true, with sources! but still interesting enough!)

Wow, color me impressed! Great work by the outdoor set designers! I wonder how long it took, and how easy was it to revert?

I work in a building right next to the hot pot place. They started by gutting the place about 2 weeks ago. There is also a notice in the building saying that they are going to be filming for a movie called "Flapjack" tomorrow, its pretty obvious its Ghost Busters though.

they are going to be filming

They've been filming scenes at what I thought was a Home Depot warehouse in Norwood lately. All the signs say "FJ Crew," "FJ Staging," and "FJ Set." This explains what FJ stands for, though the Ghostbusters car that's appeared a couple of times makes it pretty clear what's actually going on.

They just need a Fung Wah to come barreling down the street.

Monsters from the ID

I believe instead of the Sta-Puff Marshmallow man the new creature is a flaming Fung-Wah bus that chases the actors all over I-93.

Later in the story the ghost of Charlie disables every T train as revenge for getting stuck down there - which would explain much.

Seriously though, Gremlins is the only valid explanation sometimes.

It's actually kind of funny or ironic that they had to make an actual Chinatown look "more Chinatown", or, more accurately, "the public conception of what Chinatown should look like", similar to what they do with Boston accents in movies. Even actors with actual Boston accents use the "public conception of the Boston accent" when making a movie taking place in Boston. As if a great old building like the old switching station couldn't exist in Chinatown without a bunch of banners with Chinese lettering on them.

There are certainly plenty of storefronts in Chinatown that look like they're part of Chinatown - because, well, they are. I thought it was interesting that they picked four buildings that really could be anywhere - two telephone switching stations, a condemned building that basically looks like a large wall that could fall over at any moment and a Japanese restaurant/bar. But maybe the real places (well, Kaze is real ...) just didn't want to be bothered?

That block of Chinatown is

That block of Chinatown is the most desolate in the area, so it probably was the easiest to use logistically. Beach St looks much more "Chinatown" so other than changing phone numbers they wouldn't have had to do anything, but it's always so busy there I can't imagine filming would be easy. And yeah, the standard Chinatown restaurants probably didn't want to be bothered.

Though I walked by Kaze quickly this past weekend and genuinely thought it was closed, so well done there...

That block of Chinatown is the most desolate in the area, so it probably was the easiest to use logistically.

It's also the biggest, widest block in Chinatown. I imagine it was a lot easier to shoot there than it would be on Beach Street.

Please stop beginning statement with an unnecessary 'so'. I hear this all the time now on radio and on podcasts. What the hell is going on? Is 'so' the new 'um' or 'like' or 'y'know'?

So they're filming the Ghostbusters remake in Boston

They're filming the Ghostbusters remake in Boston

with no loss of any information.

You scratched my anchor!

You scratched my anchor!

So, tonight I have made for you

So. I was wondering if others cringed every time someone begins their thoughts with "so". Because they are so thoughtful?h

Good to see our tax subsidies

Good to see our tax subsidies at work. Maybe someone watching ghostbusters will say "hey, looks cool, I want to visit there but I know MA tax subsidies encouraged the studio to film in Boston not NYC where the movie actually takes place so I'm going to go on vacation to Boston!"

or we could just be happy

or we could just be happy that all of the people coming to boston to film the movie will need food to eat, places to sleep, vehicles to get around.... etc.

Now if only we could get the Hollywood folks

to work on shooting a movie that had some actual thought put into it. Instead we are getting another remake of an old film that, as cute and funny as it was, was still just a novelty in the larger scheme of things.

I was really hoping they'd set the reboot in Boston. No self-respecting ghost would haunt New York, at least not at those rents.

Overheard some detail cops this morning saying that they would be shooting today. I don't think they meant shooting their guns.

...gonna cause some real confusion among the lunch crowd at my office.

Diners on Hudson Street in Chinatown could soon have three new options for getting a drink with their food
Lawrence man identified as Chinatown rape suspect
Man stabbed near the Chinatown Gate; suspect arrested
Panic at the nightclub on report of shots fired
Police hunt man as Chinatown rapist
Women sought for closing-time double stabbing in the Theater District