Council could consider demand for Boston 2024 financial and political documents 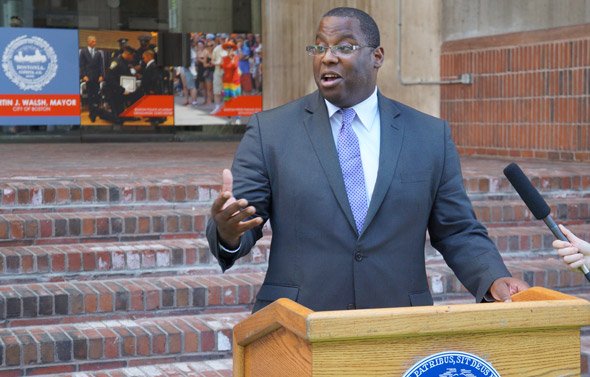 City Councilor Tito Jackson (Roxbury) this morning filed his formal request to ask fellow councilors to order Boston 2024 to hand over two private chapters of its Olympic bid that relate to finances and political support of the proposed games.

Whether and when the request goes before the council is now in the hands of Council President Bill Linehan, who controls the council's meeting agendas. If the council, which over the past year has threatened to use its subpoena power against everybody from university presidents and landlords to the city police commissioner, agrees, Boston 2024 would have to go to court to block release of the chapters.

The demand would technically be for a Boston 2024 to appear before the council or a council committee, but he or she could also be told to bring supporting documents - in this case the two chapters.

"I am not anti-Olympics, I am simply pro-Boston," Jackson said at a morning press conference in which he objected to Boston going blind into what he called a $14-billion project without its elected officials having any idea just what a bunch of unelected businesspeople promised on behalf of the city. On Friday, Boston 2024 refused to hand over the two chapters of its "Bid 1.0" document.

"Who would do a business deal without all the available information?" Jackson asked. "Sorry, Boston 2024, you don't get to tell our body, our city or our constituents" what to do - especially when those promises to the US Olympic Committee might include financial commitments "on behalf of the taxpayers of the city of Boston."

Jackson said he does not want Olympic overruns to force the city to give up on things such as school improvements and battling increasing gun violence and homelessness. Referring to Boston's monicker as "the city on a hill," he added, "It is our job to protect that city on a hill and assure it is open to all."

He added he has not talked to Cambridge City Councilor Nadeem Mazen, who also wants to force Boston 2024 to release the chapters.

I want to get this quote from his statement emblazoned on every billboard in the Greater Boston area:

"I am disappointed that Boston 2024, a group of individuals who no one has elected, would make financial promises, commitments and speculations on behalf of the City of Boston and have the audacity to tell us it is none of our business."

Not sure if the Olympics are good or bad for Boston? Wonder why it takes a subpoena to get Bid documents released to the leaders of the city? I want to know what's in those documents!

Lets keep something in mind, kids'

Tito wants to be Mayor. If the approval numbers for this shitshow were in the low sixties, would he be so quick to literally speak truth to power?

Don't get me wrong, I like what he's doing here, but Tito is a politician first and a public servant second. And if there's one thing the election of The Gang Who Couldn't Shoot Straight and their Barney Fife Mayor has taught us is that Tito may need some of those assholes he's pissing on now.

Politicians who do what actual voters want....

... are preferable, in general, to those who do what ultra-rich contributors want.

now name me at least five politicians who live that pipe dream of yours.

If he can pull from the minority voting blocks, then he needs the construction union guys less.

one needs money nowadays to get elected. How much can he pull from people who are struggling against being tossed out by the same people who put the current crooked moron in office?

So all the Connolly supporters are automatic Walsh supporters? Connolly got plenty of non-union money - it's not all tied into 2024 cronies.

Boston 2024 reminds me of this scene

from the Yes Minster episode where Hacker and Sir Humphrey attempt to get the BBC to not broadcast an interview with Hacker that would have been deeply embarrasing to the Prime Minister:

"You'll have to pass the bill so you can see what's in it," right?

Globe is running with the Japan 2020 story.

It's because it is an example of everything NO2024 has asserted.

On Friday Japan canceled plans for a $2 billion stadium that would have been the centerpiece of the 2020 Olympics, and yes, you can do that. Just because someone paid for blueprints and a tiny model doesn’t mean you have to build it. Why is the controversial “Bicycle Helmet” Dome now on the scrap heap? Two reasons:

1. In the latest poll, 81 percent of Japan’s population was against it.

Instead, the Japanese Olympic Committee will reopen bidding for a new stadium design and start from scratch in an effort to reduce costs. The updated $2.1 billion price tag would have made it the most expensive stadium in history. Huffington Post:

After all, a 100+% upward cost revision is bound to be noteworthy and the swells at the Globe are slowly coming to grips with the extent of the glib bullshit 2024 is slinging.

Too bad they already demolished previous stadium on that site!

Otherwise, perhaps they could have adapted it instead of building new from scratch, which they now have to do?

Probably because it no longer fit specs.

Maybe it would be like expecting Rome to retrofit the Colosseum?

From a casual glance at readily available data, it looks like they want to get capacity up by another 20,000. But there also seems to be some buyers remorse.

Really, I have no idea why nations fall for these fatuous spectacles, but I can do search queries.

Maybe you should set them straight? It's a pity to see these advanced urban planning visions be wasted on a backwater like Boston. Your future beckons.

It also has twice the capacity of the thing Tokyo tore down at 98,000. This stuff is easy to look up.

The L.A. Coliseum has been kept up since its construction and would be on the National Register of Historic Places save for a few disputes or dodges. It was handed off from the city to the state via the U of Cal system.

My general rule of thumb, (when I'm not easily looking things up for those who can't be bothered), is that each distinct place in the world has it's own civic culture, constraints, advantages and so on.

Tokyo is oddly full of Japanese people or Nihonji, (as Mr Kerpan thoughtfully noted). And damn them for failing to be Los Angelenos... the nerve!!!

The House of Representatives scheduled a vote on HB 3665,
https://malegislature.gov/Bills/189/House/H3665

legislation that would broaden access to public records and provide enforcement measures in the law where currently there are none. The New England First Amendment Coalition
http://nefirstamendment.org/

has worked on the public's behalf for years to advance this type of legislation
http://nefirstamendment.org/news/alliance-urges-passage-mass-public-reco...

and as of last week it appeared on track for approval.

An aggressive lobbying effort by the Massachusetts Municipal Association and other municipal lobbying groups led to the cancellation of the vote and the bill is at risk of being killed.

We need your help. Today.

Please call or email your respective state representative and senator now and encourage them to support this public records reform. The call takes only a few minutes but will make a significant difference.

If you're a member of the press, please consider running editorials in favor of this legislation and report on our efforts to reform the state's public records law.

NEFAC and other open government advocates - a joint effort named the Massachusetts Freedom of Information Alliance - have been working to improve the state's public records law. It is in desperate need of reform.

The Boston Globe yesterday reported the following distressing statistics:
Massachusetts ranks 49 out of all 50 states in the length of time it takes government agencies to respond to public record requests.
Massachusetts is one of only three states where people cannot recoup legal fees if they win a public records lawsuit.
Massachusetts is the only state where the judicial branch, the legislature and the governor all assert they are exempt from the public records law.
NEFAC President Thomas Fiedler,
http://nefirstamendment.org/about/leadership-2/thomas-fiedler/

a former editor of the Miami Herald, compared moving from Florida, a state with broad access to public records, to Massachusetts as "like walking from sunshine into a dark room."

"In Florida, the default position is that government belongs to the public," Fiedler said in The Boston Globe article.
http://www.bostonglobe.com/metro/2015/07/18/often-national-leader-massac...

"Here in Massachusetts, I got the sense that the burden is exactly the opposite."

Please help us send a reminder to Massachusetts legislators that government belongs to the public here too.

We need your immediate action. Thank you for your support.
Justin Silverman, Esq.
Executive Director

NEFAC was formed in 2006 to advance and protect the Five Freedoms of the First Amendment, including the principle of the public's right to know. We're a broad-based organization of people who believe in the power of an informed democratic society. Our members include lawyers, journalists, historians, academics and private citizens.

Our coalition is funded through contributions made by those who value the First Amendment and who strive to keep government accountable. Donations can be made here.

Last-minute deal averts state takeover of Boston schools
National Weather Service explains why our weather records come from Logan, where the weather isn't the same as in much of the rest of Boston
State says it's not waiting for new Boston school superintendent; to declare Boston 'underperforming'
An artists' collective once bought a Fort Point building for its members to live and work in; could it happen again?
Back in the day, even street urchins wore ties - and scally caps
BPS to stay local with superintendent this time; the two finalists both live in Boston