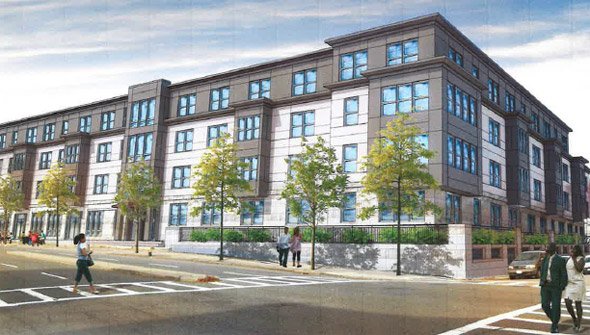 Two non-profit groups have filed plans with the BRA to replace the old Cote Ford dealership at Cummins Highway and Regis Road with a 76 apartments - 52 in an apartment building and 24 in three townhouse buildings.

The Planning Office for Urban Affairs and Caribbean Integration Community Development say the proposed Cote Village, next to the planned Cummins Highway stop on the Fairmount Line, would remove a neighborhood blight and provide much needed affordable housing in a transit-oriented development.

The AFL-CIO Housing Trust is providing financial support for the $29.6-million project; the two non-profits also hope to win federal and state affordable-housing tax credits for the project to replace the car dealership, which closed 20 years ago and was taken over by the city about five years ago.

The proposal calls for a mix of one- two- and three-bedroom units. There would be space for 84 cars.

The development would include 4,100 square feet of commercial space, a playground and a dog park.

The groups hope to begin construction next November, with completion in 2018.

Win, win for everyone!

Win, win for everyone!

Seriously why are these all so unattractive looking.

I liked the brick building in Eastie that was proposed, at least that tried to reference something Bostonian in nature.

You need to get out and around the city more.

Note that Brutalism was Bostonian sixty years or so ago ... yeah. That.

It was a fine looking car and

It was a fine looking car and truck dealership years ago, they even had a motor rebuilding operation on nearby Talbot ave, lots of good jobs were between the two.

I don't think many around here would agree.* If you ask people about brutalism, they're going to name City Hall, Gund Hall at Harvard, the Colonnade at the Mother Church, the rebuilt First Church... all of which are poured concrete.

Meanwhile, much of Beacon Hill, the Back Bay, the South End, Lower Roxbury, and Charlestown are built of brick. Brick does seem like Boston to many people.

Dont forget the brutality of

Dont forget the brutality of the Public Health Building on South Street JP . or the building that never made it at 2000 Comm Ave Chestnut Hill .

I think this building isn't

I think this building isn't bad compared to similar new construction, however I completely agree that brick would be more in keeping with traditional Boston architecture.

Way better looking than the

Way better looking than the apartment building on the other side of the street, and the current cinder block structure. This will be a nice addition. The vacant car dealer has been an eye sore for years.

somewhat reminscent of the corner building...

at Washington Beech; brick would help this one if they could afford it.
Good to see new development in M-pan or WOBHA (west of blue hills ave...heard it here first)

Who cares about the train station? There are 84, yes 84 beautiful parking spaces for a development of affordable housing (though they never say how much affordable housing) within steps of a thriving local business district, a Red Line station, and two major bus routes for the area.

Forgive me for sounding callous, but when I was broke and working multiple jobs, I took the T; I couldn't afford a car.

Strike up another one for the warehousing the working class industrial-construction complex everyone. This is the second announcement this week of transit oriented housing to be built on city owned land that could have better benefitted the entire city with more market rate housing.

There is a market rate complex of 500+ units that has reasonable rents and is nearly full right across from this site. Perhaps more market units into the market would have lowered the rent for everyone. I guess the city has other ideas about the continued wealth stratification of the city.

Serious question: what train station, and why? It's less than 3 blocks from a Red Line stop, even if it's the watered-down Red Line trolley.

But its within walking

But its within walking distance to Simco's and a Burger is King joint!

You know, the line that has gotten beau coup upgrades, including so far 3 new stations. There's supposed to be a fourth between Cummins Highway and Blue Hill Ave. It would make for a one seat ride into town, as opposed to the two seater right now. Also, I believe it was agreed to a decade ago, except the abbutters didn't like the design.

This complex is right next door to it. The idea is called Transit Oriented Development.

Does anyone know of any sources for projections re: how each additional unit alters the real estate environment in boston? Do these mostly attract newcomers or people looking to move out of multifamily houses? Is there a breaking point where X number of new units would start to slow the increasing average rent?

A downturn will do it

We're in a "go-go" period right now where money is coming in (for many) fast and furious. When the next recession hits, there will suddenly be too many luxury units and they won't be able to fill them. They will drop their prices/rents creating more opportunity for the next level of tenants. This will cascade down somewhat. Adding more units will help, but only financial tough times will really break this crazy upward trend.

What landlords of these places prefer to do to not piss of existing tenants is to offer some number of months rent-free to new tenants who sign leases.