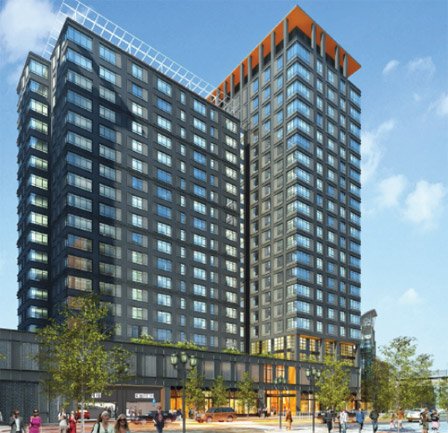 The Drew Company says it wants to build a second residential tower next to its Waterside Place building on Congress Street rather than the supermarket and "innovation space" it had originally proposed.

In a letter of intent filed with the BRA last week, Drew says Waterside Place phase 1B will now consist of a 21-story apartment building with roughly 278 units, from 511-square-feet studios to 1,357-square-feet three-bedroom apartments. The building will have just 84 parking spaces - but part of the parcel will be used for an entrance to the 1,500-space parking garage Massport is planning.

In 2011, Drew submitted an overall development plan for the Massport-owned land that included the phase 1A residential building, a 55,000-square-foot supermarket and 7,000-square feet of "innovation space."

As with Waterside Place phase 1A, which opened to tenants last year, the building will sit on land leased from Massport.

Yeah, but we need residential

and either way, it's an increase to the tax base.

That's nice, but the reason

That's nice, but the reason for the new proposal is that it has way more 3x the number of SF.

What a shame.. More housing

What a shame.. More housing for the upper class.. Massport should be generous with the land that they own on that waterfront. City of Boston should take that land by eminent domain and build schools that are desperately needed for the kids of Boston. Heads of Massport and the employees that work for Massport with their $100k plus politically connected jobs are all scum of the Earth!

Welcome to route 128 on the Harbor. #crapitechture

Obviously. Its Transit Oriented Development, so why would rich/wealthy people want a car when they have the glorious Silver Line next door. I think its obvious that rich people love taking the bus.

Rich people have many ways to access a vehicle that do not include a parking spot out front (or down bellow in this case). It's not really a question of Silver Line vs. in building parking. And the people who want one of those 84 spots will happily pay extra to get it, keeping costs lower for the many who don't need one.

Yes and access to a 1500 space Massport garage right next door. Parking doesn't have to be on site for it to be useful.

Gee, I wonder could anyone use any type of means to stop this dog feces on 9 day old snow proposal?

John Drew is President of

John Drew is President of ABCD and a huge philanthropist and advocate for the needy, did you know that??????!!!!!

There are two John Drews. One, President of ABCD & the other John Drew the developer. Worked at ABCD for 25 yrs.

Yes. I know that. They were

Yes. I know that. They were clients of ours for many years. Father and son. Wonderful gentlemen.

How does one expect people to

How does one expect people to live in a 'neighborhood' if there is no supermarket to buy groceries?

And no space to innovate in!

And no space to innovate in!

The least surprising part of the change

Does anybody even call that area the Innovation District anymore? The whole concept was very much a Menino thing and, obviously, he's not around.

...hizzonah is well with us.

The Globe's style guide seems to be to call it the Innovation District, for reasons beyond me. (for example, from a few days ago http://www.bostonglobe.com/metro/2015/11/29/boston-ems-response-times-sl... )

Drive to one, of course, That's why we need all those parking spaces, no?

A residential tower is fine - but no reason a grocery store can't be on the 1st or 2nd floor of it....

Rich people do not go to the grocery store. They send the house boy.

I don't see why they can'r have a supermarket on the ground level. I mean, I get they's think it's déclassé, but it could be done in a way that's, um, classé.

So, a building without glass -- City Hall?

It is a vast improvement over phase 1A

See what I mean?

Massport wants to add 1500 parking spaces, why in the world would the city let them add that many vehicles to the already traffic clogged waterfront. Improve the Silver Bus, maybe even make it a light rail line as was originally promised, not 1500 more cars every rush hour. Its like their airport development, terrible transit options (shuttle from the blue line or a silver shuttle from South Station) and loads of parking spaces and moving sidewalks from a central parking garage (no central T stop is possible, of course). Everything Massport touches turns to traffic and smog.

From what I understand before

From what I understand before majority of the newer buildings were built the area was full of parking lots. Also I believe most of the parking spaces have not been replaced as well. I might be wrong. Anyways if there's demand why not build?

Most of these buildings have

Most of these buildings have multiple floors of underground parking. You may not see it, but it is definitely there. Always lots of empty spaces under Vertex.

You are wrong. Every building

You are wrong. Every building so far that has replaced a surface parking lot has included multiple stories of underground parking. That parking will most likely cost more than the parking it replaced, but there will be just as much of it. The 2015 "sustainability" plan for the Waterfront (ludicrously) projected an increase in the number of vehicle trips in and out of the neighborhood every day. It's not at all clear from their report how those cars are going to get there.

But that looks like commercial in the first two floors... why can't a supermarket go there?

Why can't we have both?

I've been to complexes in Europe with a combo supermarket/mall above an underground garage topped with residential units above.

We do have both!

get in the Fenway too.

Because it's South Boston and

Would I like a place to buy groceries so I don't have to use Peapod or pay Foodies prices or end up eating at Dunkin Donuts every day? Sure, but somehow we make it work.

Hottest neighborhood? It isn't even the most interesting in Boston, and one of the only expensive neighborhoods without any subway stations (no the silver sloth doesn't count). Its reminds me of being back in Ohio.

Without the titty bars, gambling, or any urban planning concept from later than 1990.

Hah! Your friend is right.

I went to the Lawn on D a few times over the summer, occasionally hit a bar around there. I have friends who work with AFH. The whole newly minted area felt like it was carefully engineered for people who wanted to live in a city but were afraid of living in a city-- a feeling not helped by the fact that everyone I met who wasn't a holdover from the old Revolving Museum/IPA/Channel days had moved to Boston a) recently b) from a suburb, and c) mostly not from the northeast (that surprised me tbh). I did befriend a very nice couple who I promised I'd escort to the zoo-- which they'd been told is dangerous.

It's always been the Silly Line to me, but I think the Silver Sloth is a better insult.

The last deal for land was over $300million for, as I recall 21 acres. It maybe a dull neighborhood, but it is hot with the money people. Not many places selling at those prices.

Not $300 but $395 Million for parking lots that will eventually host "Luxury" housing.

No subway station on Southie

No subway station on Southie waterfront, don't you know when people live in $700k plus condominiums they want to make sure that there will be no riff raff around in that area, so this is one way of keeping the unwanted out, its like an upscale town.

This is one of the reasons

This is one of the reasons why transplants from most places shouldn't be telling natives what is world class. Most places in the US just aren't as nice as what is already here, and the natives know it.

Or do you bitch about that too?

I'm in favor of any housing

I'm in favor of any housing development as I think it can only help, but many want things a neighborhood needs like a grocery store. Tons of people moved to the area claiming "oh, we'll have a grocery store soon enough". If the developer proposed a residential tower on top of a grocery store, that would be great. It isn't clear to me, but the rendering looks like an empty lobby, not active retail that could serve the neighborhood and make it a better place to live. Lots of residents would love to get off the silver line, grab groceries just outside the station, walk home, and cook.

How about three grocery

How about three grocery stores. Why should people who live in these towers who have no car (only 84 spaces) be forced to take the bus to South Bay for a competing supermarket?

I can assure you

that people living in these buildings are not taking a bus to South Bay for any reason.

Following is an excerpt from

Following is an excerpt from "Deadly Alliance: The FBI's Secret Partnership with the Mob," by Globe reporter Ralph Ranalli.

''A badly rusted swing bridge connects the gleaming skyscrapers of Boston's financial district to Northern Avenue, a windswept road that commands a panoramic view of Boston Harbor and runs from the northeastern up of South Boston down to the shipyards and fish-processing plants of the Boston Marine Industrial Park. City planners proposed that Northern Avenue be the heart of a grand Seaport Development district in the late 1990s, complete with a contemporary art museum, luxury hotels, and a giant, high-tech convention center. The idea was to capitalize on the biggest and most expensive public works project in U.S. history, the $1.7 billion-per-mile "Big Dig," an ambitious plan to build a ten-lane underground expressway replacing the old Central Artery, an unsightly green steel elevated highway that for years had literally and symbolically cut off the waterfront from the rest of the city.

In the early 1980s, though, the South Boston waterfront was still an isolated, foreboding place. Motorists who ducked under the grimy artery and clattered across the Northern Avenue Bridge saw only water, old brick warehouses, and a desolate stretch of weed-infested parking lots until they reached the State Fish Pier and a cluster of bars and tourist-trap seafood restaurants with names like Anthony's Pier 4, Jimmy's Harborside, and the No Name.''