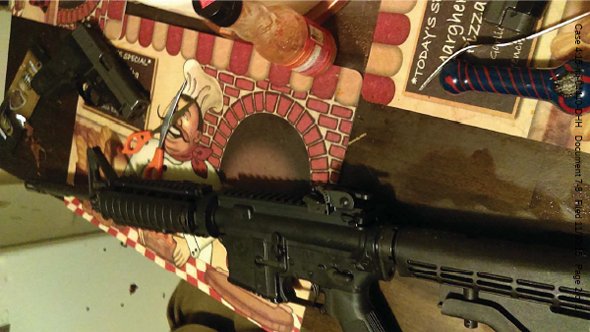 Feds say this photo was taken from suspect's phone; shows stolen weapons in her home.

Ashley Bigsbee, 26, was charged with possession of one of the machine guns stolen from a Worcester armory last month after investigators found photos on her phone of the weapon in her Page Street home - and after the man charged with the burglary implicated her - according to federal officials.

Bigsbee was arrested Friday on charges of unlawful possession of a machine gun and making false statements, the US Attorney's office in Boston reports. James Walker Morales is charged with breaking into the armory on Nov. 14 and making off with 16 weapons. All of the machine guns have been recovered; the FBI today offered a reward for the return of six handguns.

An affidavit by an FBI agent on the case says Bigsbee met with Morales the day after the burglary at her Page Street home to arrange the sale of five guns to two other men.

Officials seized Bigsbee's phone on Nov. 20 when she was arrested on an unrelated outstanding warrant on state charges:

[A]t the time of her arrest on the state warrant, agents recovered her cell phone. A subsequent search of the phone pursuant to a search warrant revealed numerous photographs, including a photograph of Bigsbee with a distinctive hand tattoo, a photograph of what appears to be a stolen Sig Sauer handgun and an M-4 assault rifle. Prior to her arrest on Nov. 20, Bigsbee voluntarily spoke with FBI agents and denied knowing anything about a robbery of the armory and the guns Morales was allegedly trying to sell. She denied any knowledge of the stolen weapons.

According to the affidavit, further investigation revealed that the photographs were taken at 27 Page Street in Dorchester. A search warrant was executed at this location on Nov. 20 where agents observed distinctive items seen in the photographs. However, no weapons were recovered from this location.

The US Attorney's office reports the last of the machine guns was recovered in Dorchester on Friday but did not say where.

Bigsbee will remain in federal custody at least until a detention hearing on Thursday, the US Attorney's office says.

Will she be charged with

Will she be charged with violating the city AWB ban?

Since enacted in 1989 not a single person has been. Why is the city talking always talking tough but never enforcing the law?

That ordinance is to make sure legally licensed individuals don't possess scary black looking "assault rifles." And now, in the rare instance that a reported assault rifle is actually an assault rifle, I wonder how they'll handle it.

Nobody's specified and I can't tell from looking at the picture, but, this particular M4 being military hardware, I would assume it's capable of fully-automatic or burst fire. It would therefore not be covered by Boston's AWB, which covers only semiautomatic firearms. (Source: http://goal.org/masslawpages/bostonawban.html )

Machine guns are covered in

Machine guns are covered in that ban.

Point it out to me in the page I cited. Note that "semiautomatic" means "fires one round for each pull of the trigger" and specifically excludes firearms that have a "burst fire" or "fully automatic" mode where multiple rounds are discharged while the trigger is held down. (Thanks to decades of poor journalism it's not uncommon for people to confuse the two.)

Statewide, ownership/possession of a machine gun requires a special license (a/k/a a "green card"), and you have to get your town/city police chief to sign off on it. As with getting an unrestricted LTC which allows you the ability to carry, your likelihood of getting one varies greatly by town according to the opinion of your local Chief of Police on such things. It may well be that the Boston PD refuses to do so for pretty much everybody, resulting in a de facto ban in the city limits of Boston. That wouldn't surprise me.

There may also be a different law banning possession and/or ownership of full-auto firearms in the city of Boston. But it's not covered in the law I cited.

The Assault Weapons ban was targeted towards legal owners

Who move into the city and attempt to keep their Assault Weapons they might already legally own, and also restrict new gun owners from possessing Assault Weapons legally with LTCs.

The penalty for a first time offense? $1,000. Is that the tough fine you wanted to see?

This person did not have a right to posses this stolen firearm. The fine for having it is a potential 20 years in prison.

What about 'secure storage'?

If these weapons (call them semi auto AR-15's or something) were stolen from a legal LTC holder, there'd be hell to pay.

Really...one criminable mastermind is smart enough to get away with this cache? Then dumb enough to hang around and let the GF take pictures of them with her cell phone??

He wasn't smart enough to get away with it.

He was identified within a day or so.

What's the point of a law

What's the point of a law that only targets the law abiding?

Isn't this like banning red cars in the city because everyone knows red cars go faster?

No it would be like banning dirt bikes on public roads.

if say Brookline, Quincy and Cambridge allowed them.

Those other towns do not have

Those other towns do not have awb bans. Boston is the only place in the state with a ban on top of the state level cosmetic feature restrictions.

Because you can legally own other semi-automatic rifles in Boston chambered in .223 or 5.56. The ban is on certain rifle platforms with particular cosmetic features (e.g. ARs, AKs), while functionally and mechanically the same as the "legal" ones by definition and under MA law.

She should face the city fine

She should face the city fine and federal charges. Laws need to be enforced.

Officials seized Bigsbee's phone on Nov. 20 when she was arrested on an unrelated outstanding warrant on state charges:

So she had an active out and decided it would be a brilliant idea to have photos of the evidence on her phone...most modern ones will append geolocation to the EXIF data in the photo. I'm sure that led them to her home address, and a warrant was quickly served?

I'm not sure what to fear more - the kind of criminals who are this f'in stupid, or the ones who are smart enough to get away with it.

The stupid criminals are involved with street crime. These guys get caught or killed after a while.

The smart criminals become bankers and lawyers and commit worse crimes. They generally get away with it.

that picture is rather revealing

stolen guns and a fully packed Bowl. i wonder which one she prefers with the hot sauce

Not a machine gun

An M4 doesn't have an automatic fire mode and isn't classified as a machine gun by the military. Just figured I'd mention that since it makes it seem slightly scarier when you put it that way.

Aren't military M4 variants selective fire (safe, semi, burst)? I think that would bring them under the machine gun classification as far as civilian possession goes. Although you're completely correct that even a fully automatic rifle wouldn't be considered a machine gun by the military.

Lol notice there is a pot

Lol notice there is a pot smoking device on the table. no surprise there

Lol "Please take note of the

Lol "Please take note of the apparatus on the table which is used for the recreational smoking of the narcotic Marijuana."

I assume the first offense

I assume the first offense was getting those placemats.

Most noticeable part of the photo (to me)

For remembering the dialog!

I can't believe no one noticed...

Well, maybe because that's not what it is

To quote the FBI affidavit, what you're seeing is "a distinctive blue and red pipe of the type commonly used to smoke marijuana and a fork."

These are popular in some circles where "ladies" like to smoke dope and crack, especially if there are men to watch. Just don't ask me why I know that, but I assure you it is not from direct personal experience.

What do the tattoo symbols on

What do the tattoo symbols on her hand mean? That's what I'd like to know.

Dorchester man who was shot at South Shore Plaza has died
For second day in a row, fire breaks out at Morrissey Boulevard hotel
Fire hits Morrissey Boulevard hotel
Police hunt driver who hit pedestrian in Grove Hall, then kept driving
Court upholds conviction of man who raped a woman in Dorchester, then used her phone to call 911 because he wasn't feeling well
Andrea Campbell thinking of running for attorney general