Hopefully, there weren't any angry Libyans in Twin City Plaza 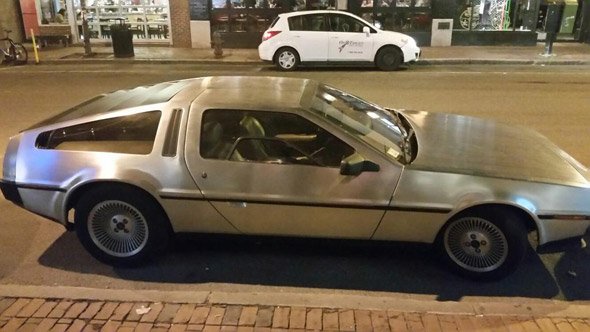 How are these not more

How are these not more popular with the trust-fund hipster set? They are the ultimate retro-ironic cars.

Anyone can buy one of these

Anyone can buy one of these cars for under $15k if you really can find one.
Would be great to have these cars reborn again, by having chrysler or some other carmaker get some type of permission or by the name or whats left of the company from DeLorian family members.

The company has been back in

The company has been back in business since 2005

Not the same company

that DeLorean founded. This Texas-based group bought out what was left of DeLorean's parts inventory, which was rather extensive - including new frames and engines, and set up shop as an independent company.

What a shame DeLorean failed

The history and political back story is just fascinating.

Somebody should make a movie with the real story.

Not the Hollywood version.

Well it is 2015. The year Marty McFly gets a fax from his job telling him that he's fired.

And don't you mean the Lone City Plaza? (depending on which 1985 you are in)

Technically speaking, we do know that the Universe goes on forever.

So, in a weird twist of logic, we can assume that everything is just a set of data. We are chemicals. Everything is a molecular structure.

Yes, one can argue that this proves that there are, indeed, alien life on other planets. You could possibly find a clone of yourself. And yes, there is a chance you could find a strikingly familiar face learning that they were fired from their job.

Yes I know. Because that's pretty much the 'science' theory behind the old 90s TV Show Sliders, which is about the multiuniverse theory. I refer to this as a parallel universe, or the "slice" theory (slices of life)

Because right now in a parallel universe, I am sitting here writing this reply on a Dell computer because I opted for the Dell XPS system I was looking at instead of the HP Z system I have instead when I bought a new computer a few months ago.

OR right now in a parallel universe, I'm writing this post, but it's in German because that Axis won WWII instead of the Allies.

OR right now in a parallel universe, a younger version of me is writing this reply because instead of being born in the 70s, the birth control was taken, and my parents didn't have another child until 1983 in that universe (I was a product of a hidden birth control pill via my father)

OR right now in a parallel universe, I'm not writing a reply because 5 years ago I 'missed' the link I saw on facebook that directed me to the site, so that version of me has no idea what Universal Hub is.

But I was primarily talking about the Back to the Future Universe (as fiction)... (go read that link, your head will spin)

But thanks for the brain twist this morning...

Welcome to our world!

OR right now in a parallel universe, I'm writing this post, but it's in Russian because Russia won WWII instead of us.

In our world The Soviet Union did win WW2, and so did we, because we were allies. Was there a Nazi Germany in your world?

And you're right, I'm not fully awake yet so yeah.. I updated the post to say German instead.

Edit: and actually we're both right because Russia could have "won" and invaded us too (via Bay of Pigs in 1960s).. we're talking about parallel universes so just about any scenario is possible.

The U.S. didn't give up when the Germans attacked Pearl Harbor.

when the going gets tough...

I thought it was Battle Hymn

I thought it was Battle Hymn of The Republic

But my limited searching came up with Star Spangled (even on IMDB - maybe wrong one? I was thinking Animal House).

Technically speaking, we do know that the Universe goes on forever.

No. Not by our current understanding of the observable universe. The universe, is "only" 91×10^9 light years across, and although extremely old (our best data says about 13.8 billion years), it does evolve. Conditions now are quite different than they were in the past. And conditions in the future will also be very different. Just how different is still something we've not enough data to determine exactly. But every model with any data to support it indicates that this universe is not the 'eternal machine' you're implying. It'll end, either by collapsing back into a point of infinite density, or by cooling off to a uniformly diffuse and cold expanse. No one's found any new 'stuff' pouring in from somewhere else to keep the wheel turning forever. And we've looked - and continue to look.

Now, perhaps there's a quantum 'multiverse' of alternate universes, differing from ours so slightly that only the details of personal lives of creatures like us divide them (ala cybah's Sliders ref). In some ways, it's a pleasing conceit, but unfortunately there isn't any evidence at this point that this is how things work.

And believe me, lots of cosmologists/mathematicians (especially the ones who think string theory is cool) have been trying to figure out a way to see if this is true. At this point, no one even has a theoretical experiment that could show this.

Or perhaps the universe will collapse and re-"Big Bang". We've not nailed down exactly what is going on with strange matter and strange energy, and the ultimate nature of these will determine if we're just one of an unending chorus of cosmic flowerings. But even if this is true, this universe isn't going to just reverse and repeat - the very nature of the mass-energy that collapses in the last seconds will be completely different than what exploded out in the first few. And no matter - or even information - about the Universe will survive that final infinite 'crunch'.

So sorry, it looks like this is the only universe you and I or anything like us will ever know, and it's just going to happen once.

Make the best of it now. No do-overs.

These thoughts brought to you courtesy of an MIT-trained planetary scientist on his 50th birthday.

Somerville gets artists, artist says
Labor Department had been negotiating overtime issues with Somerville restaurant; lawsuit came out of left field and is full of lies, especially the part about killing a cook's family, lawyer says
Feds charge owner of Somerville breakfast place threatened to have employee's family killed in overtime dispute, cajoled other workers to lie to investigators
Somerville pickup driver always gets right to the point
Remember the Big Dig?
Somerville, Fenway Health ready a safe-injection site