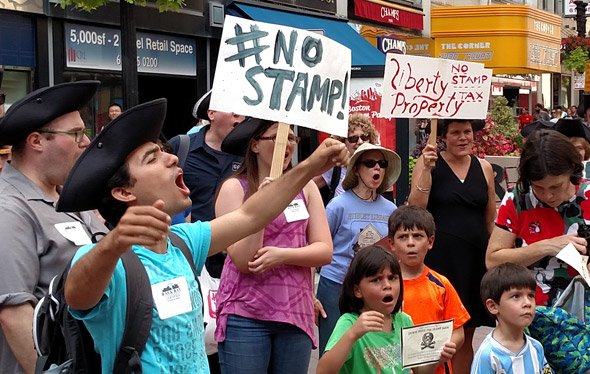 Andrew Oliver, appointed by His Majesty's Government to enforce and collect the stamp tax on all paper products, today announced his resignation from the position on the steps of the Old State House after a rabble of protesters marched his effigy around the town, put it on "trial," found it guilty and ripped it to shreds.

Protesters chanted "Liberty! Property! No stamps!" to the befuddlement of a number of bystanders, who had no clue what they were protesting. One bystander, however, clearly grasped the protest, yelling at the marchers, "Tax the French in Quebec!" As they passed the Millennium Tower construction project, one worker up on the third floor cheered them on by liberal use of an air horn.

At the Old State House, leaders of the protest read charges against Oliver. Finding none willing to defend him, they declared the effigy guilty and tore it apart, throwing bits of it into the crowd. And then, slowly, Oliver appeared on the steps of the Old State House. After the booing quieted down, he read a statement in which he said he had never collected any of the tax and that he never would, since he was resigning, effective immediately. After some hearty huzzahs, an official from the Bostonian Society thanked participants for observing the 250th anniversary of the Stamp Act protests in Boston, which helped set in motion the events that led to the Revolution.

The crowd then dispersed, no doubt to the nearest tavern.

[some partisan b.s. statement about this related to the 2016 election, and maybe the Olympics, that belies my lack of understanding that this was a cool recreation of an actual historic event meant to bring the past alive.]

Wish I could have gone.

The past can, and often does, reflect contemporary issues. The American colonials who fought the revolution and war of independence did so because of what they considered to be an oppressive, over-bearing central government and king. Parallels to the present can obviously be made.

The "king" parallel in this, again?

Do you think Congress does it's job

acting as one of the checks and balances the way the three branches of our government are supposed to? You appear to be a Barack Obama and Democratic partisan, which is your business, but it makes me automatically question many of your posts, such as this one. I don't think we have a healthy functioning government. The President has been given too much power, Congress and to a degree the Courts, in the process, have abdicated their responsibility. I would say the same if the president was a Republican. I'm neither a Democratic or Republican partisan.

As for the large, overbearing central government, yes ,we have a too large and overbearing federal (and many state and local) government(s), at least as far as the little man and woman. It's a nanny-type, quasi-fascist state. This same nit-picking government lets large and influential special interests groups and big corporations and industries get away with murder. It's just the so-called average person who gets screwed left, right and center.

and because Sandy Hook never happened,

Jade Helm, 911 was an inside job, FEMA internment camps (at Walmart), Obama = Kenyan Muslim lovechild of 1960's commie radicals, Hillary killed Vince, Obamacare will kill grandma, they're coming to take your guns, we found the WMD, Hillary invaded Iraq, get the government out of my medicare, the feds created ISIS in order to impose martial law, Homeland security was behind the Marathon bombings, the federal reserve is controlled by "Jews", European armies are hidden in America waiting for the order to attack.. Did I miss any?

The answer to your first question..

is "yes". I do agree, however, that we do not have a healthy and functioning government, but not for your reasons.

The average person, may as you say, be getting "screwed left, right and center" but it basically because we now have a government that functions more as an oligarchy and not as a Republic "for which it stands." And "quasi-fascist state"? (I really do not know what that term even means. One and/or a "state" is either a fascist or one/it is not.) I have never heard of a half-fascist.

Ya see what happened there

I'd write something, but that would get away from my first point. The worst part is that I studied political culture and systems, but my minor in history tells me to just take a historical reenactment on face value, since it looked to be wicked awesome.

the rebellion by the colonials had a bit more under the hood than being just pissed off at the King of England (although that did factor in for some, I am sure). Many, in fact, still loved the King but did not like the fact they had to pay taxes (w/o representation and all that). But, mostly, the guys with the wealth did not want to pay taxes, any taxes, with or without representation for some, and it all went on from there. If one wishes to draw parallels to the present, well, the latter statement is a good one to draw from.