The lions of Boston 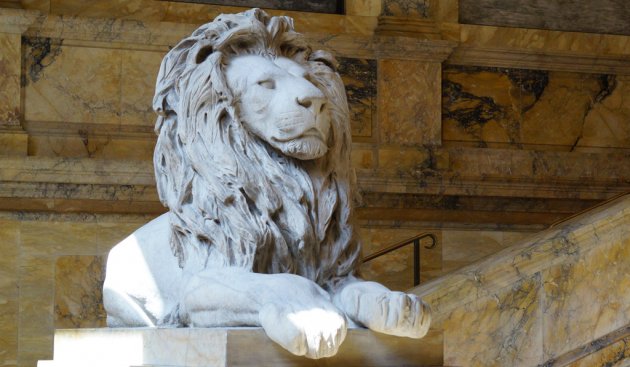 Boston loves its lions. From stately lions in our main library to lions that spout water around a flagpole, from stylized lions with wings to lions that proclaim the majesty of the British empire, lions are our pride. Read more

And they're everywhere, even if sometimes you have to look way, way up to see them sometimes. Here's a sampling, starting, of course, with one of the two lions in BPL main library in Copley Square, who quietly commemorate the battles of the Civil War.

Those lions are not the only ones in the library. As you enter, or exit, the old building, look up at the ceiling, where you'll see the names of prominent Bostonians of yore, including Franklin: 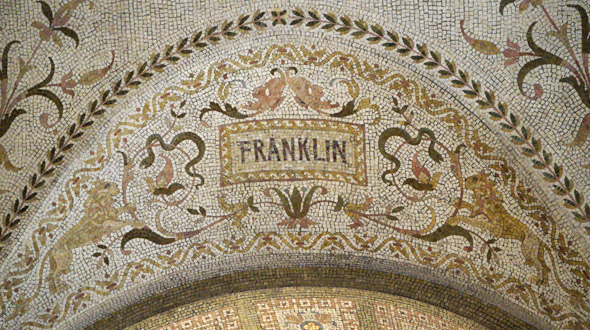 Franklin, of course, fought against the British Empire, whose symbolic lion and unicorn still adorn what became the Old State House: 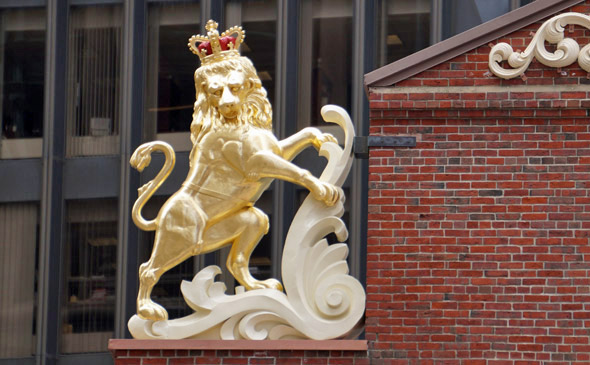 The lions around the Angell memorial fountain in Post Office Square all look like they can't believe they're reduced to spitting up water: 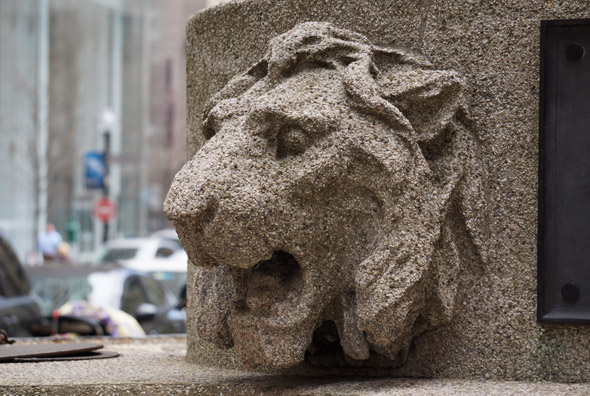 The lions on the World War I memorial wall on the Common by the steps up to the State House, also originally water spouts, don't seem so aghast:

The lion at Old North Church in the North End, however ... 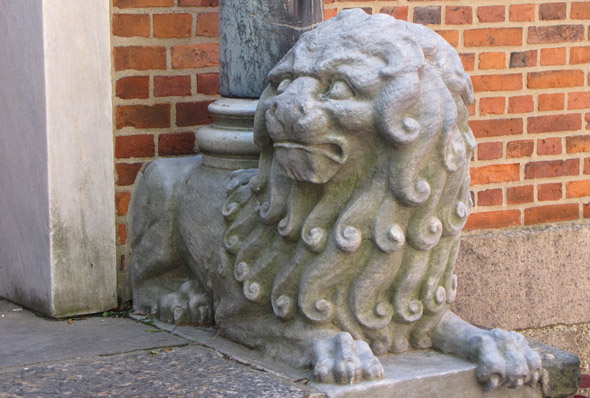 The old Filenes building in Downtown Crossing has tons of lions, all looking like this: 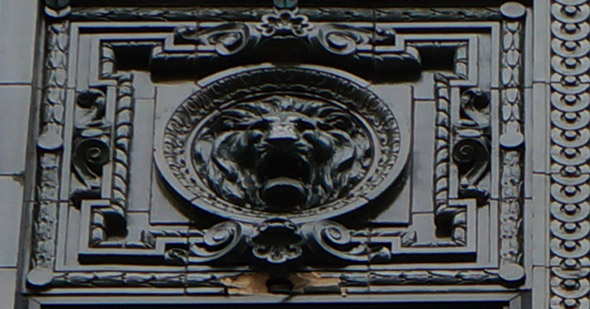 There's also a fierce lion atop the main entrance to 1298 Commonwealth Ave. in Allston:

The lions outside the Copley Plaza Hotel, however, couldn't be bothered to eat arriving guests: 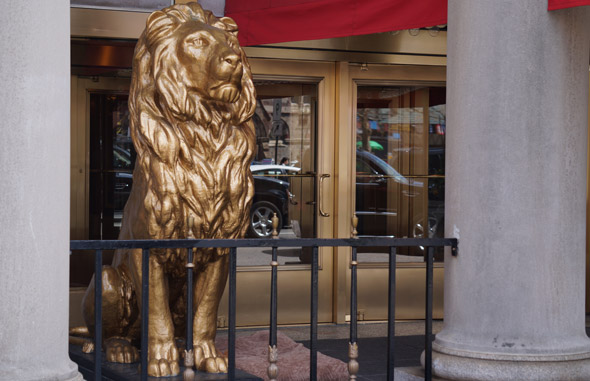 The lions at the Chinatown gate don't seem in a man-eating mood, either: 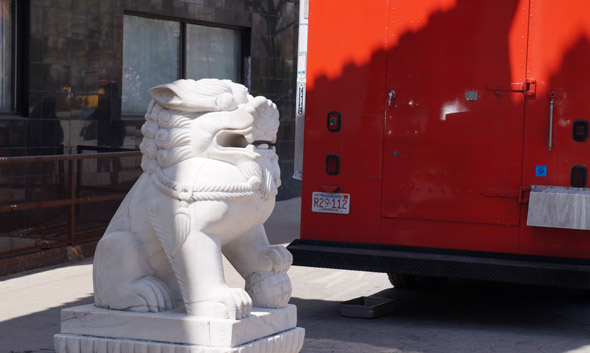 Boston has some flying lions, including these two on the old BPD headquarters (now Loew's Boston hotel):

You have to look pretty high up to see the flying lions atop the Park Square building that now houses apartments where the Renaissance charter school used to be:

The lion atop the entrance to the Colonial Theatre on Boylston Street probably just saw a good show:

Are there other lions in Boston?

Why yes, yes I do know of some other lions.

There were three lions at the Hotel Kensington, which was located across from the Boston Public Library until 1967. The Exeter Plaza is on that site, today (where Morton's was for awhile, where there's a Bank of America branch and now the relocated AT&T store).

Two of the lions were placed in front of the Copley Plaza Hotel in 1974 (just a year after it was returned to its original name after being the Sheraton-Plaza Hotel for about 20 years). Apparently, they were painted gold at some point.

Apparently, no one knows the whereabouts of the third lion.

Regarding the Old State House, I've always found it odd that it's been redecorated as it looked in pre-American Revolution times. After the War, all of the ornamentation was removed because citizens because they represented the Coat of Arms of the United Kingdom.

Well into the 1970s, maybe even early 80s, two of the Copley Square lions remained at the entrance to a parking lot where the Kensington had been at the corner of Boylston and Exeter, where Exeter Plaza is now. It was commonplace for friends to say "meet me at the lions in Copley Square". I must say, the lions were far more distinctive than the AT&T store that currently occupies the site.

Loving all these lions! Aren't there lions on the old Exchange Building as well?

I have always wondered

about this lion on the corner of Columbus Ave. and Greenwich Park in the South End.

No clue about the story, but it's been there awhile. Here are some kids sitting on him some time before 1934: The photo's by Leslie Jones and it's from the BPL. Posted under this Creative Commons license.

A 1996 article from the Boston Globe (about the hidden gardens of the South End) has this to say:

"One garden on the tour is a hole in the ground, the sunken back yard of a building on Columbus Avenue. The building has a fine big lion in the front, and is called the Barnum & Bailey Building because, it is said it was once owned by P.T. Barnum."

No idea of the veracity, though it'd be neat if that were true.

The stories about this building and its lion are a bit more imagination than reality. The building's first occupant was a prominent physician--Dr. Orren S. Sanders in 1872:

We give an engraving of his present commodious residence, at 511 Columbus Avenue, Boston, which was finished in 1872. This house, which is his own property, and which was erected at a cost of some hundred thousand dollars, was designed throughout by himself, and seems to indicate that, if he had not been a doctor, he might have become eminent as an architect. The sanitary appliances are perfect, the decorations in excellent taste, the arrangements for comfort and convenience the best possible, and from basement to attic it bears testimony to the high development of the doctor's constructive faculties. The lion, life-size, which is placed in couchant attitude on the corner of the house, and is a conspicuous ornament to the avenue, was carved from a block of granite selected by the doctor himself, and, as a work of art, may compare favorably with the famous lions of Landseer, which adorn Trafalgar Square, in London.

Hey, that's still pretty cool, though. Thanks for going digging for the info!

There are lions on the gates at Westland and Hemenway in the Fenway. Seen here under snow!

That Old North Church lion! HILARIOUS! I need to go take a matching-facial-expression selfie with that thing.

There's this lion outside an

There's this lion outside an old Victorian House in Brighton on Cambridge St.: http://imgur.com/4EQUWUg

The war memorial with the inscription "The Memory of the Just is Blessed" is not, I believe, a World War I memorial. If memory serves, that's the Robert Gould Shaw 54th Massachusetts memorial, commemorating the African-American soldiers who served in the 54th in the Civil War. The United House of Prayer for All People on Seaver Street has two lions flanking its main entrance.