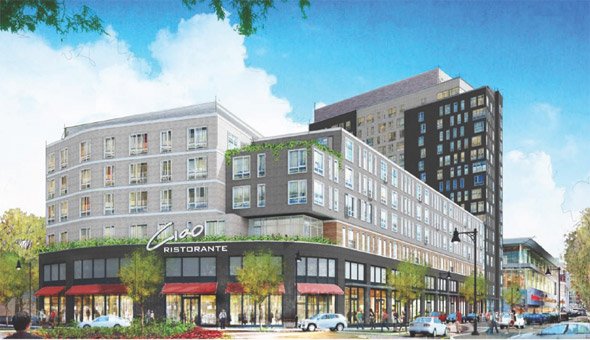 New Balance last week submitted detailed plans to the BRA for a 295-unit, 17-story apartment building at Guest and Arthur streets in Brighton - where B.L. Makepeace used to be - as part of its overall Brighton Landing project.

The addition of residential units to the Boston Landing development will help create and support a vibrant 24/7 neighborhood where people can now live where they work and play. By providing a continuous active street wall along Guest Street mirroring the north side of Guest Street with retail uses, streetscape improvements and landscaping, the Project will reinforce the developing Guest Street corridor and the vibrant pedestrian-oriented character of the district. Pedestrian activity will be generated and enhanced both by the double loaded retail and by the residents who call Boston Landing home.

The filing does not specify what amenities would be open 24 hours a day, although there is a 24-hour IHOP nearby.

The proposed Residences at 125 Guest Street, designed by Elkus Manfredi, will have two main wings - a 6-story structure along Guest Street and a 17-story tower away from the street. Units will range from studios to three bedrooms.

The building will have 300 spaces for bicycles but just 150 for cars. New Balance says it expects many of the residents to forego permanent car ownership with a brand-new commuter-rail station - being paid for by New Balance - across the street.

In addition to close proximity to transportation, residents will also benefit from its superior location and the nearby amenities such as the adjacent Stop & Shop supermarket, as well as the attractive Boston Landing campus amenities including 80,000 sf of ground floor retail and restaurants, the adjacent ice area (Warrior Ice Arena), Sports Complex, and NB Fitness, which is a 16,000 sf full-service fitness club located one block west on Guest Street.

Over my dead body!"

Exactly. Who needs a car when

Exactly. Who needs a car when you'll have a spiffy new commuter rail stop that sees trains every two hours on weekends?

Didn't you get the memo that they're supposed to bike everywhere?

It's simple you see. Since there's no trains on the line, they get to balance their bikes on the rails to go into downtown. And they can even get to Kendal by balancing on the rails under the BU bridge.

They are supposed to RUN everywhere. You know what New Balance sells, right?

I also suspect that "24-hour" means "continuously occupied" as in "apartments = people sleep there" and "jobs = people during the day".

Is this map out of date?

This map shows a hotel on the north side of Guest St, near Stop & Shop and right across from this proposed residential complex. In fact, that space reserved for a hotel was landscaped and planted with *trees* this year.

Does anyone know if the planned hotel has been cancelled?

I got the map from the filing for the apartment building.

Their filing today shows the

Their filing today shows the hotel every place you would expect to see a hotel. They even include the hotel under the no-build conditions for the residential. (that is, they anticipate that in 2020, there will be a hotel there). All the 3D models in the filing have the hotel.

I'm not sure why people keep obsessing over them doing landscaping and planting some trees. That's pretty normal for a site where you haven't even filed a PNF for the building, much less received approval.

Thanks for the update! We're

Thanks for the update! We're not obsessing about planting trees. But trees struck us as a relatively permanent landscaping solution within a plot that will be torn up in a few years to build a hotel. Wondering if that implied a change of plans.

Maybe they are just starting

Maybe they are just starting the trees for transplant later....

For paying for the commuter rail stop, if only more developers would do similar Boston would benefit exponentially, possibly more than from affordable housing funds paid!

...Federal (or is it National) Realty paid most of the $25 mil for the Assembly OL stop, BU, Harvard, and MassDOT are going thirdsies on the $25-$30 mil West Station, HYM is contributing big time to the relocation of Lechmere. Leveraging private development money for infill stations is amongst the few bright spots (or at least, flashes of competency) in the last 10 years of transit governance.

Looks good to me! Good job

Looks good to me! Good job on reduced auto parking, we have enough traffic as it is, providing free-on-site parking just encourages car use here (great to see the numbers on the bike parking!). Yes the rail is limited on weekends right now but that is not the final plan, the station is being built with DMU's in mind and despite the delay (likely a good thing) there will be more frequent service on the FW line (maybe 10-15+ years out). In addition the 64 and 86 buses (granted not too frequent but not bad) run along the site. There is a grocery store right next door, and its a 10 min walk to 57 and 66 buses that run frequent all day.

BUILD THE DAMN HOUSING ALREADY. This is really a great site location and I am glad NB is deciding to make the investment here, it is very smart. Also big kudos for paying for the rail stop, thats huge!