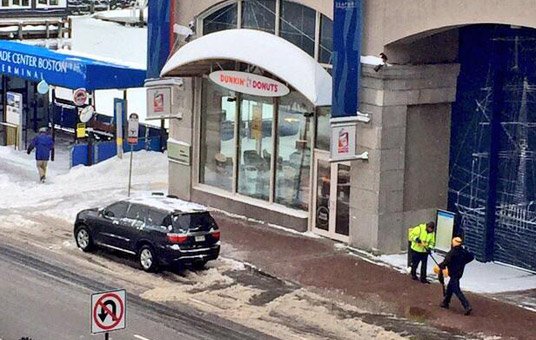 TrueNE_79 reports that the Dunkin' Donuts at the World Trade Center is open this morning, unlike all the other ones from South Station to across Fort Point Channel.

Snope reports Tags in Porter Square has plenty of salt - and parking spaces - but is running low on shovels.

open dunks in the fin'l district

The one across from International Place (225 Franklin?) is closed, but the one further up High Street on the corner of Congress is open.

With public transportation shut down (a remarkable fact itself) where are the customers coming from? The Seaport, especially over by the WTC, is not a filled with millions of people making the area hop as the next exciting and fabulous location of hot urban living.

On the other hand since the many residences will be in towers and composed of people who can afford luxury condos (and entertain in fancy restaurants) I hope that the Seaport District does not become a West End zone of towers and dead street life. Hopefully the basics of neighborhood living will open up. Grocery store, CVS or Walgreens, movie theaters in the massive building rising in front of the Courthouse and most important, cafes that bring in the average person and make the neighborhood a place that is livable.

With all of the massive buildings rising in the Seaport District how will there be much street life? Plunking luxury condos does not mean that people will be on the street, shopping every day, chatting with neighbors and creating a human scale neighborhood. Instead the Seaport District looks like it is to become an extension of the Financial District with non-human scale structures that prevent street life. I realize that the massive building rising in front of the Courthouse is supposed to have a cinema. But even that is not guarrantee that street life will spread to the rest of the area. Nor will the flow of people to the ICA. In fact I can see the ICA cut off from street life because walking to it, even via a Silver Line station, means walking sidewalks which are far from guarranteed to be alive with people. Not unless all of the massive buildings are required to support businesses that support street life.

So far that is a mixed success. The Vertex building has a Starbucks which support street life. It is scheduled to get a resturant that can add street activity. But the western corner of the building on Northern Avenue is to get a bank. Banks neutralize street life. They make no contribution.

I wonder what Jane Jacobs would think about the Seaport District?

Dunks at State and Broad

in the Financial District is open. Starbucks across the street at State and Merchant Row was closed.

Great to open up a store that

Great to open up a store that just sells shovels..

Gun-toting music-video maker arrested at South Boston basketball court, police say
Car crushed, person injured when object plunges 16 stories from building under construction in the Seaport
More power woes in South Boston; Eversource brings in workers, generator
Squid to make way for apartments along West 2nd Street in South Boston
The dark night returns: Eversource grid in Boston flickers out across city
More life sciences proposed for marine industrial park, but with a twist: Some of it will actually be marine focused