Stop leaving checks and IDs in your car: An out-of-state gang is waiting to break into your car and cash those checks 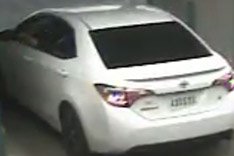 Wayland Police report suburban banks are being hit by women using stolen IDs to cash the checks they stole along with those IDs - and that the incidents may all be the work of a shadowy national syndicate known as the Felony Lane Gang.

The gang swarms into an area, starts breaking into cars parked at malls, health clubs and parks, then matches up the IDs they find with similar looking drug addicts, who are then sent in cars to cash the checks in the furthest drive-thru window at local banks - the so-called "felony lane" because drivers in it are a bit harder to identify.

Wayland Police say that over the past few months, banks in Wayland, Medway, Millis, Holliston and Framingham have been hit by the gang, possibly based in Florida. Gang members have also used stolen IDs and checks at banks in Attleboro, Hopkinton, West Boylston, Worcester, and Falmouth:

The same female is believed to have defrauded New Jersey banks in Bernards Township, Ocean Township, and West Long Branch between Nov 2014 and Jun 2015.

That pic of the cigarette dangling out of her mouth is a keeper. Classic.

The cigarette look is absolutely classic. Reminds me of Revere and East Boston people in the 60s and 70s smoking Pall Malls (always inexplicably pronounced "Pell Mells") when I was growing up.
I thought it was extinct. Maybe they all went to the boneyard of old people who leave comments at the Herald site.

Actually, anon, the correct English pronunciation is indeed "Pell Mells." That's English as in England (http://www.mailtribune.com/article/20080324/NEWS/803240310). They do own the language, after all, unlike us Johnny-come-lately New Englanders. So it's not really "inexplicably" pronounced that way!

Kind of reminds me of the scene where he muses that most people who work were not nearly as industrious as his crew was when they were just trying to stay high.

Stake out the nearest Lacroix outlet, maybe there's one in wrentham?

I haven't used a check in a long time. I still see some folks use them in supermarkets but not very much. Are they making a comeback?

Checks from other people

I get my expenses as a check, as well as things like pretax accounts. If someone stole them and my ID, they could cash them.

looks like the same woman in both photos to me

Including her/their hairline & hair type. But with the fuzziness & angle of the second image, though, her age is less apparent. Any chance that same ring from the first photo is visible in a frame neighboring the second photo?

Also, in both photos there appears to be a small human in the passenger seat, although in the second photo only the right ear is visible, as if (he) is turning around to address someone in the back seat.

I guess being accompanied by a child could be a good tactic for a woman crook, as it would discourage attention or outright suspicion.

With the practiced way she holds that cig, she looks like an actor from a 70's cop drama. I kinda love it. Maybe in her second career she can audition for the next gritty Wahlberg Boston crime drama.

Yeah, I didn't get why we

Yeah, I didn't get why we thought this was two different women. Driving the same car and rolling in the same purple headband? Weird gang.

The Wayland PD alert says there is more than one woman involved in the local frauds, but that the photos are of just one woman.

Bugsy there is riding shotgun in possibly both photos. So they probably wouldn't mind also speaking with her.

The size of the drive -thru lanes is quite large in especially in other states. The links you posted connect to Baltimore area news. I worked at Household Bank in the Security Square area in the 90's. We had 4 drive thru lanes. Other branches had even more. Makes sense those with shady motives head to the furthest lane out. Hence, the "felony lane".

Must be Travelers Checks.

Tinkers!
That's what they call Gypsies in Ireland.

No, they're not "Gypsies" any more

They're Roma. The term "Gypsie" or the term "gypped" are now deemed ethnically offensive and will get you in trouble for discriminating against the Roma people, who are persecuted.

It's way easier to claim you're being discriminated against than it is to stop scamming people and get a legitimate job, I guess.

Tinkers are not Roma

"Tinkers", now known as "Travellers" were indiginous to Ireland, even if they filled the same economic niche.

They traditionally roamed the countryside selling and repairing tinware and providing other services in areas that could not support a shop.

Felony Lane Gang originates out of Ft. Lauderdale. it is not a gang per se but a loose network of people committing similar crimes. It's almost like a task force. Loosely formed, players are plug and play, and they have a specific mission.

They break into cars generally, steal pocket books, wallets, etc. they mix match licenses and chacks from different thefts and hit the drive through lanes. The like to use the far outside lanes but will come to the close one's if the need to. The outside lane means t it tougher to make a face to face ID. This is the Felony Lane. Hence the name.

They have been known to hit the persons house as well.

Don't leave your purses and pocket books in your car. Particularly at the gym.

This is really, really crazy!

I hope that these women get caught and imprisoned for their crimes really quickly, if they haven't been caught and incarerated already.

What to look for

In other Framingham news

Bear on the move in Framingham
Boston Apartment Availability Percentage Spikes in Key Neighborhoods - Reveals Ominous Trend
Dorchester woman settles doubts whether you can get a Corolla up to 100 m.p.h., State Police say
Framingham kid held on $10,000 bail for alleged Boston cruiser torching; if he makes bail, he has to stay out of Boston
MBTA cancels public meetings on various projects tonight
Racist, homophobic youth football coaches in Framingham are fired