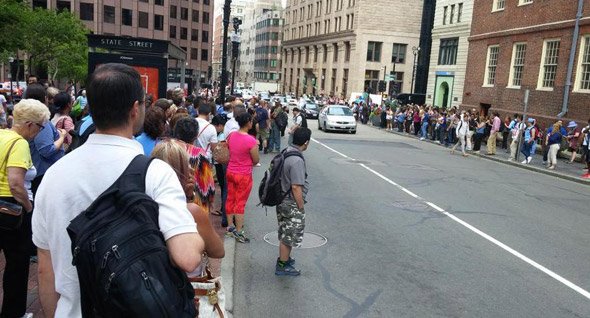 T workers turn into Waldo at State Street: Where are they? Photo by Mister AO.

The T says it's busing passengers between Bowdoin and Airport - except Bowdoin riders are supposed to catch the bus at Government Center - due to a bomb threat that shut Maverick station around 5:30 p.m.

Update: Around 6:48 p.m., Transit Police completed their sweep of the station and re-opened it for service.

Boston should be paranoid about acts of terrorism.

After all, the September 11 attacks originated from Logan.

The IRA has been protected by Irish mobsters and the Catholic Church here.

In the late stages of the gilded age, Sacco and Vanzetti were locals...no? Someone correct me I am just reacting.

And we are the supposed hotbed of "Revolutionary" "thinking"...or so we say to ourselves. And the leadership at the helm of the Commonwealth was at times very closely linked to an allegedly powerful criminal, only apprehended when he was in his 80s. One that murdered several people and most curious advice was: if you want to make a career in crime, go to law school. My god.

Then we have 2013 and those idiots who ruined the Marathon and the 4th of July for many working people like me. Those morons are so profoundly beneath respect to countenance, I don't care to entertain their alleged motives....or confessions....

Just by luck I avoided this indignity. But it's too, too much. Boston is stress city. Give people a fucking break. Plz.

Sales tax holiday not enough. I suggest a retreat for all to the country. To repair. And see the stars.

And for car alarms to be banned. To sleep and perchance dream.

Boston, get it together, plz. I saw a dumb bag near the Callahan and thought, oh hey, some drunk hot homeless person left their shit here. Not, you know, the end of liberal freedom. or movement.

And McDonalds should serve

And McDonalds should serve breakfast all day!

Remember the prank for that stupid cable network show (actually I don't know how stupid the show was - I never saw it) that gridlocked the city?

The hilarious thing about that Moonenite scare was that those electronic ads had been up for at least a week before some Chicken Little decided they were a bomb. I passed by one daily on my way to work. They weren't even particularly impressive as guerrilla advertising, let alone bombs. The not so hilarious thing is that I got caught in all the exaggerated hysteria when it was decided they were bombs, and it took me forever to get home.

A "Scare" Milked To Its Last Drop As Blatant Security Theatre

The historical consensus is

The historical consensus is that Sacco and Vanzetti were innocent. As far as historical categories go, they don't belong so much in the "terrorism" category, as the "witch hunt" one alongside stuff like Salem in 1692...

Good point, I was trying to not come as angry radical...

I am just realistic and people think I am cynical and call me a communist. Pff.

Boston and mass hysteria....something to investigate.

Also I wanted to mention the day they were pursuing the Tsarnaevs terrorists (which they basically admitted to) was probably on par with dangerousness as the terrorists themselves.

The police response was hardly "coordinated" and yet they believe they keep us safe.

Not a police men are assholes. But it is a rather reasonable presumption, I'm sorry. It's why I will be cautious near them...because I am afraid of them more than the mentally ill people they get paid to detain and babysit.

There was a report that some police people just volunteered--being gung-ho and the heroes that they are -- shooting thousands of ammo...trespassing into people's yards...

Suffocating the regional economy to the tune of 330M or something...

Maybe it's a Boston/Yankee thing to be inclined to mass hysteria...? Hey, this winter, I am surprised we are still here, seriously, it harmed people mentally not just with achy backs...

Want to also point out the police response to chasing down the one Tsarnaev terrorist was downright shameful.

Gung-ho police people from different towns showing up, to "avenge" more so than to apprehend...or else why would they have fired thousands and thousands of ammo...in a normally quite, middle-class neighborhood....

Look, I have needed help from the police, and I have called them. But mostly I still struggle with trusting them...

Many are just authoritarian and sadistic. "Not all police..." Well, of course. But it is a reasonable presumption. I am sorry. Just like not all mentally ill people are violent. But if some is psychotic due to illness -- like schizophrenia---and they have a bat or other weapon, I am turning tail and running in the other direction...

I sorta feel bad for the police but then, you know, they're not exactly poor and they have a long documented legacy of being no less criminal than the people they swear they protect us from.

I love this blog/ "Uhub" and try not comment often but sometimes you have to get things off your chest.

I guess the BPD has no confidence in the TSA and their warrantless searches of passengers.

Imagine though, for a moment, that there actually was someone out there looking to bomb the T. What a great diversionary tactic it would be to call in a threat to a station and attack the masses of commuters displaced at another stop down the line.

Security Theater at its finest.

The Eastie side was also FUBAR

My wife was traveling inbound on the Blue Line when their train was stopped at Wood Island Park. She called me to see what was up and I had to give her the bad news about the bomb scare.

They were stopped there quite a while then limped into Airport where they were herded to the bus ramp to wait for shuttle buses. By the time they did arrive (on short notice of course) the crowds were built up.

She, and a number of other people opted to take the MassPort shuttle into the airport and caught the Silver line to South Station.

While that worked, South Station was also a mess for what ever reason so she got out of the crowd and walked to the Chinatown stop on the Orange line and re-boarded there to get to Forest Hills.

It was one of those "Charlie on the MBTA" moments.

Did she ever return?

Did she ever return?

No, she never returned!