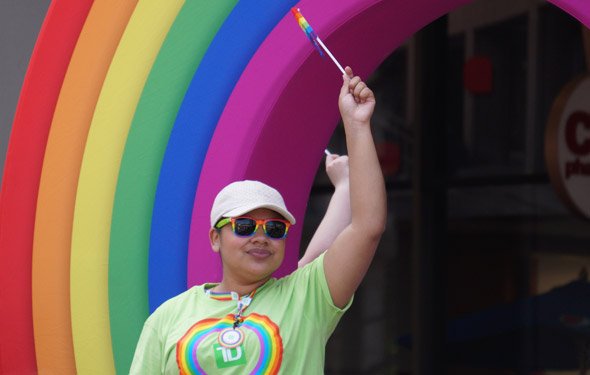 Tens of thousands of people either marched in the annual Pride parade today or cheered on from the sidewalks along the route. From little kids on parents' shoulders to senior-citizen couples holding hands as they marched, people enjoyed the parade. You could tell some people were really having a ball: Some people dressed up for the occasion: How in the world did these people get through the parade without suffering heat prostration? These people, however, were just chillin' out: A number of schools, churches and temples had contingents: Of course, what would a large assemblage be without the Jesus is Lord guy? Not everybody was thrilled to see them: Not everybody was thrilled with the parade. The Rainbow Times reports "about a dozen LGBTQ activists of Color and allies participated in a sit-in to disrupt and shut down the 45th Annual Boston Pride Parade."

The night before, meanwhile, was the annual Dyke March. Greg Cook photographed that march: Some photos by Shelagh Dolan.

Not Charlie Baker or Karyn

Not Charlie Baker or Karyn Polito.

Charlie is a coward

Not so fast about Karyn Polito. Let's giver her some credit..

While yes, I agree she is connected to the tea party, however, she did marry Senate President Stan Rosenberg and his partner in April.

Yeah he is the Senate President so it could be a political favor, however, if she truly was so anti gay marriage, why do any ceremony at all? So she must be softening her stance on it and according to the article), got applauded for doing so. The article also states

Along with officiating Rosenberg’s wedding, Polito and Baker filed an amicus brief supporting gay marriage to the U.S. Supreme Court

So I guess that's a good thing also.

But yeah, surprised that she (and Baker) wasn't there... (Cholly, however, was all over the state on Saturday (at least according to his twitter feed))

I didn't attend either

Because I don't think that being gay is a novelty act that calls for my attention as people proceed down a closed street while observers day drink. I'm glad those who participated had a good time, and I appreciate my Boston neighbors who are gay.

I don't give a damn about the St. Patrick's parade either for the same reason. Being Irish isn't a novelty act either.

Maybe I should be Baker's spokesman.

I don't think you were missed.

the only reason that being gay is not, as you call it, a "novelty act" is because of events like this along with years of work by activists? Or did you think our current state of (mostly) tolerance just happened naturally...you know, like climate change?

Thomas Lloyd. Why am I so gay?

Thomas Lloyd
Why am I so gay?
https://www.youtube.com/watch?v=_U1foLW8h54

some of those bitching about Pride being exclusionary should really do less sitting and more walking. Love the sign saying they won't March with BPD.

Of course while they're sitting on their asses complaining and checking the number of Twitter followers they have, the BPD was on the street tracking down killers of children of color. Black lives matter indeed.

I just wish these children were around when the BPD had real racists in their ranks.

and definitely does a great job of keeping politics at the forefront, whereas a scant dozen "activists" protesting the Pride March because it doesn't meet all of their "demands" seems like an exercise in pettiness. Honestly--BLM Boston seems like an organization whose whole job is to exclude and marginalize as many people as possible, including those who should be natural allies. If they want to survive and thrive instead of being a joyless, pointless bunch of pouters, they may want to study up on coalition-building and some other basic skills.

Oh--and humor. The signs in the Dyke March are beyond awesome especially the 99 Problems one.

But what do we have to offer, other than our demands?

b) Prejudice among the old soc.motss vicious, bitter, and hysterical.

Won't it be grand

...when no one gives a shit about what you do with your genitals and other adults?

That day has already arrived in places like Boston

It'll be good to see what all these predominantly white yuppie activists do to support the many others who have helped em carry water over the years.

I'd love to see a Black Lives Matter Solidarity Parade or a Wealth Inequality Sux Parade and so on.

As it is, the right is courting some of the LGBT elements and vice versa.

It makes sense because once you get past genitalia preferences you have perfect right wing supporters, pro marriage, anti tax, etc.

From a gay bohemian

As a gay male who came out in the 1970s, I basically agree with the above statement. Heterosexual people and younger LGBTQ people may not know it, and older LGBTQ people may have forgotten it, but in the 60s, 70s, 80s and into the 90s, same sex marriage was never an issue. It was never even thought about or discussed among LGBTQ peoples. Nobody was particularly interested, and many were outright disdainful. I bring this up just to give a sense of perspective and/or reference.

I like the quote from director John Waters, "I remember what was good about being gay was that you didn't have to get married or join the army. Now we have to do both." And another quote of his worth quoting, "I'm investing my money in tattoo removal and gay divorce. They are the growth industries of the future." :-)

Mainstream acceptance of homosexuality, while distasteful to some older gays who went through the struggle, will only help to insure that gays receive other legal protections.

If mainstream acceptance means there is one less Matthew Shepard, it's a win-win, no? Who doesn't love a wedding?

I have long considered the possibility that universal rights to marriage would not have been such an issue had our systems of insurance, social insurance, child custody, and medical care not been so tightly bound up with one's marital status.

In short: marriage is a privileged state, and straight allies could see that clearly as their gay counterparts scrambled to approximate even a few of those privileges.