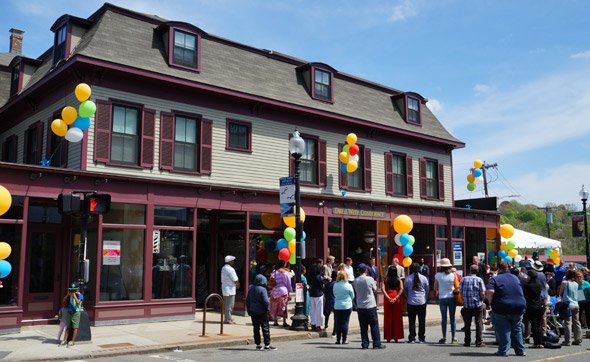 The building, which dates to 1868 - the year Hyde Park became a town - has space for five stores on the first floor and four apartments above. Historic Boston bought the building in 2011 and spent $1.3 million renovating it. McCarthy, who represents and lives in the neighborhood, said the renovation shows Hyde Park matters.

After the dedication, people flocked into one of the new stores, Dress with Confidence: Walsh posed with Sandler Lacoste, owner of the Private Office Barber Shop and his wife, Darnelle. Lacoste is also a sixth-grade math teacher at the Davis Leadership Academy in Dorchester. A stylish girl outside the clothing store with a cupcake: So we are there already?

I thought we needed the Olympics to make us a world-class city.

HP is the next

Neighborhood to be gentrified. My white ass is looking at houses there because yuppies have made Rozie too dame pricey.

would be that East Boston is next

Just like it have been for the past 20 years, right? Eastie would be, if it didn't have that little international airport next to it...

The secret is out: they have functioning MBTA service.

Already the median price of condos there [slap up jobs with granite counters inflating their price] are already cresting 400K+.

If I was a gambler [and had any money] I would say that Chelsea is the next to fall, despite being bus only.

I've heard the businesses there are going to require suits and ties soon.

Downtown HP is gonna get a lot more popular:) it's just a question of when.

There goes the neighborhood

It was built in spite of all of the screaming about the density, the mixed use, and the lack of parking, am I right?

now where am I gonna park Trigger and find him some feed?

The apartments and storefronts were there for years. It's not a new building and nobody in the neighborhood has ever complained about opening storefronts

In 1868, you didn't have morons whining about parking, density, etc.

You know, the reason why we can't have nice things anymore: NIMBYs.

In 1868 you didn't have problems with traffic, parking and density. We have those problems to the max in the Pierce St/Davison St area. The only morons are people that go around calling people NIMBYs.

If you want to live in a

If you want to live in a place that is covered with asphalt, big box malls, and highways; a place that values machines more than human life, then you are welcome to move out to the suburbs and be happy there.

Many of us in Boston would like to live in a nice place, that is, a city built for the needs of human beings first and foremost, and not a paved hellscape of traffic and parking lots.

If that is what you got from

If that is what you got from my comments then you are a bigger twit than I thought. Those of us that live in the Pierce Street/Davison Street area already have to put up with bad traffic and parking problems. Building this pos will only exacerbate those problems. If you're so interested in the needs of human beings first then perhaps you should come down to the area that this pos will be built and see if it is someplace you would want to live. If you wouldn't want to live there (which I seriously doubt you would) then why is it a good idea to force people that need assistance paying their rent to live there? Wondering in what part of Boston you, such a concerned citizen, lives.

...if that's the case, why oppose new development for working fams here along the Fairmount line...can't have it both ways.

nice event though, and congrats to historic boston and Emily Patrick at Hyde park Main Streets....the place looks great: grab some momentum for the rest of Fairmount Ave!