DA, police say there's a reason the prices at one Chinatown store were such a steal 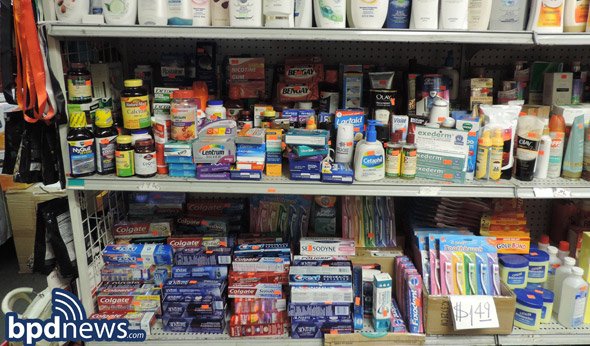 Some of the allegedly stolen goods

The owner of a Chinatown discount store and two of her workers orchestrated a downtown shoplifting ring with which to stock their own shelves, prosecutors charged today.

Phuong Quach, 54, of Dorchester, and her employees Feng Deng, 71, of Quincy, and Cindy Tran, 49, of Malden, were arrested last night and arraigned today on charges of receiving stolen property over $250 and distributing counterfeit goods. They were also charged with aggravated organized retail crime, a newly categorized crime under a law passed in April, the Suffolk County District Attorney's office reports, adding they may be the first people in the state to be charged with the crime.

The three were arrested after a 10-month investigation by Boston Police into a spate of shoplifting incidents in downtown stores, in which the three allegedly recruited shoplifters and told them the specific items they wanted, so that they could resell them at Quach's My-Tan Fashion and Super 99¢ Plus on Washington Street, prosecutors and police say.

Based on evidence gathered during "Operation Sunblock" by Boston Police detectives assigned to District A-1, retailers across the downtown area have apprehended and debriefed numerous shoplifters since at least January and learned that they regularly stole from these businesses and sold the stolen goods at My-Tan Fashion. The interrupted thefts ran from razors and lotion to designer clothes and shoes.

Plainclothes investigators observed store brand products offered for sale with the original retailer's price tag and a My-Tan Fashion price tag at a lower price. In some cases, the defendants sold these items at prices lower than even the wholesale cost paid by national retail chains: an over-the-counter antacid, for example, was priced at My-Tan Fashion for $13.99 – $15 less than the retail price at a chain pharmacy a few blocks away, and $10 less than the wholesale price the pharmacy paid.

Boston Police executed a search warrant at My-Tan Fashion yesterday, recovering at least 5,000 items with an estimated retail value of more than $100,000. They found no cash register, business records, or paperwork showing inventory or sales. In a recorded statement, Quach allegedly made statements admitting knowledge that the seized items had been stolen.

This isn't a shoplifting case. This is the very reason the organized retail crime statute was signed into law. We allege that the defendants played a knowing role in the theft and unlawful resale of tens of thousands of dollars' worth of goods.

The three could face other charges; police say they seized dozens of possibly counterfeit designer bags and wallets that were sold as being real designer items.

This is not Quach's first run-in with the law. In 2011, she admitted to sufficient facts when charged with selling crack pipes at the store. The case was continued without a finding, the DA's office reports.

The DA's office adds that the people who allegedly stole stuff for her from other stores have been charged with larceny.

I can't say I'm surprised. Did they find apples stolen from the orchards too?

Your view is racist

Your view is racially prejudiced.

What do apples being stolen in NH have anything to do with this? The top search hit on Asians stealing apples in NH is the indisputably racist white supremacy site, Stormfront. Only their commenters would make any comparison between these two crimes. And vile things they have to say, as well.

How to Read Signs in Chinatown?
https://digboston.com/

A few years ago I saw a lone

A few years ago I saw a lone gift set from The Body Shop there. My first thought was "stolen goods."

I have a friend who does estate auctions, and unopened gift sets end up in "lots" that people buy as a package deal - sort of like those storage locker auctions.

But, yeah, that place has always struck me as sketchy.

The title is a little

Well, that's because the location IS in Chinatown

According to the DA, it's this place on Washington, around the corner from Kneeland/Stuart.

There is also a store in Dorchester, but the Washington St. store is indeed in Chinatown.

I walked past the raid yesterday on my way to grab lunch. There are a bunch of other stores in Chinatown that also sell tons of junk. I wonder why this one was singled out.

You can find that answer

By reading the accompanying article Adam took the time to write.

They weren't arrested for selling junk by the way.

Any time I have gone in there a clerk had followed me around, watching me like a hawk (to prevent the shoplifting of their stolen goods, I guess.)

Isn't 99-cent plus a Dorchester discount store on Dot Ave?

May Tan Fashion is on Washington in the Midtown Cultural District, right across the street from Chinatown. Here's a giant PDF showing the boundary:
http://www.bostonredevelopmentauthority.org/getattachment/4706a7c2-518e-...

despite what the BRA says..

despite what the BRA says...thats chinatown

I realize I get neighborhood lines wrong all the time, but no, this time I'm not backing down: That is Chinatown, notwithstanding the efforts of the BRA to try to rebrand the Combat Zone by just making up a new name.

Google also puts the offending business outside of Chinatown

Good for a quick lookup of something, but not something you'd bet your life on. In this case, I bet they just superimposed BRA maps on the city, and well ...

Take, for example, the Oak Lawn Golf Range in Roslindale. Google says it exists, so it must, right? People who actually live there will tell you no, it doesn't. Years (decades?) ago, the guy who owns the Oak Lawn Cemetery got this idea to put in a driving range on what used to be a quarry and landfill. He even put in some towers for netting. But he did it without a permit, the city forced him to stop and it never actually became a functioning driving range (and now Eversource owns the land and it's torn down the towers). And yet, according to Google, there's a place in Roslindale where you can hit a bucket of balls. Only there isn't.

Google runs off of registered business entities for these notations, so they probably still have some business registered at that location - even if it was not permitted to actually come to fruition.

Google Maps also used to have

Google Maps also used to have BU and Northeastern reversed.

I believe Google uses the BRA's definitions to draw those Boston neighborhood boundaries. They appear identical to the GIS shapefiles that you can download here. Google must have downloaded them and converted to their map overlay format (KML) to use on Google maps.

Exactly, neighborhoods are not only, and maybe should never be defined by fiat. It's based on the residents' consensus, which is why not everyone may agree. But everyone who goes around Chinatown doesn't dispute this much, over 75% agree that the street and number that store is on is clearly CTown. That is difficult to argue with

But CTown? Really. No.

You would never call

You would never call Chinatown your community, right? So would you please give me leave to call one of my own neighborhoods by the name in use among Chinatown friends? Oh, that's right. I don't need to ask.

Yep. Within Asian and Asian

Yep. Within Asian and Asian-American communities, including but not limited to the residents of Chinatown themselves, "ctown" is Chinatown. Unlike SoBo, those who are and have been part of the community for years use the name.

I don't disagree. But I was

I don't disagree. But I was clearly not referring to Charlestown, right? Has Charlestown come up before at all, until now? Charlestown doesn't have a trademark.

Trademark? ?? It is what it

Trademark? ?? It is what it is, C Town is C Town, China Town is China Town , the Zone is the Zone , Leather has its own area , and so does Garments.. Its geographic association, not a monopoly board. Dont make it more than what it is, no drama. Its not like there is like a Sykes-Picot Agreement or the such in place.Sheesh

The Roz , Roslindale is too

The Roz , Roslindale is too quaint

Relax man, it's just a way of

It's the Zone , not even

It's the Zone , not even China Town, sorry!

Been there many times

Phuoc Quach of Dorchester is

Phuoc Quach of Dorchester is scheduled for arraignment this morning in Boston Municipal Court, the DA's office reports. His brother, Sas, could not be found for comment.

That place was always a little shady

They used to sell pound bags of Dunkin Donuts coffee, among other things. I know Dunkin Donuts distributes to supermarkets, but they certainly don't distribute to dollar stores.

Nah, I bet they just fell off the back of a truck is all.

Reminds me of NYC Canal street

Back in the day that's where one goes expecting to find knock-off designer goods, grey market electronics and stuff that fell off trucks.

This is why they have those stickers in CVS etc.

I used to wonder why Walgreens had those stickers that say, "this product intended for sale at Walgreens" which were very difficult to remove. I thought, really? How much stuff gets stolen from these stores? And then I read about it in many stories, including:
http://www.theatlantic.com/business/archive/2012/03/why-are-criminals-st...
So, not only are they stolen goods, but who knows what other business they are involved in.

With way more details about the alleged shoplifting.

Drug addicts are the shoplifters

selling these small items to be fenced and sold. Local merchants know the familiar faces and do what they can and get do not trespass orders. Uphill battle. Hopefully Quach is Phuoc'd now.

During my stint as a Grand Juror (well over a decade ago) we handled one case where a crew was shoplifting baby formula from a CVS. When accosted by a clerk one of the shoplifters stabbed and killed him. I was perplexed why someone would go to such lengths to get away with a few cans of formula; where they using it to "cut" drugs and were trying to avoid a drug distribution charge? No, the ADA handling the case explained. There is quite the black-market for such pilfered items. And yes, drug users are apparently a reliable merchandise source.

I'm sure this is just the first such indictment. Hopefully so.

Bottles of Tide are the

Bottles of Tide are the original Bitcoin

What's the story re the electronics? shop at 58 Kneeland Street on the NorthWest corner of Tyler Street?... 2 doors up from the live chickens shop on Kneeland St.
https://www.google.com/maps/place/Kneeland+St+%26+Tyler+St,+Boston,+MA+0...

She sold cigs from under the counter, too.

Police hunt guy they say punched a man to the pavement outside Theater District club, then fled on a private bus
Chinatown restaurant to lose liquor license for a day after getting found with underage drinkers two nights in a row
Tufts Medical Center doctor fired after arrest in child-sex sting
Man charged with closing-time quadruple stabbing in the Theater District
Life without parole for man convicted of kidnapping and killing Jassy Correia in 2019
Chinatown's Hudson Street could get new restaurant, apartments