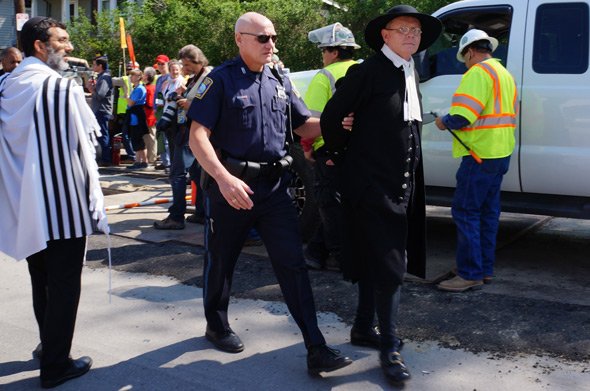 Rev. John Gibbons of the First Parish in Bedford - and chaplain for the town's Minutemen - under arrest.

Some 16 clergy members from across the Boston area were arrested this morning on Grove Street in West Roxbury, where they briefly blocked construction work on a high-pressure natural-gas pipeline to protest what they said was an unneeded pipe that could blow up the neighborhood.

Among those arrested in the latest protest against Spectra Energy's gas pipeline and transfer station at Grove and Centre streets were the Rev. Anne Bancroft of West Roxbury's Theodore Parker Church and the Rev. Dr. Jim Antal, president of the Massachusetts Conference of the United Church of Christ: The morning protests began with prayers and songs outside the gates of the "metering and transfer" station, where the gas will be pumped into National Grid's lower-pressure network. Spectra, building the pipeline for Algonquin Gas Transmission, and National Grid say the pipe will help make National Grid's system more reliable; protesters say National Grid could do that without the pipeline by fixing all the leaks in its existing pipes.

Rabbi Shoshana Meira Friedman of Temple Sinai in Brookline and Roy Einhorn, cantor at Temple Israel in the Fenway, unscrolled a torah, from which Friedman read a passage. The clergy and supporters - about 75 people in all - then walked down Grove Street to the site where the pipe now ends, about a quarter mile away from the transfer station, in a procession led by Friedman and her ukulele.

Spectra workers radioed ahead to their counterparts, who stopped work as the crowd gatherered. The 16 clergy members then filed into the construction zone and sat down on the lip of the trench in which the pipe is being built (Einhorn stood with his torah scrolls; Gibbons and another minister stood as well). The clergy led prayers for the pipeline workers, the police and the neighborhood. After a few minutes, a Boston Police sergeant told them they were trespassing and that they had five minutes to leave or they'd be arrested.

None left. Gibbons compared the situation to the fight against the British during the Revolution. "No gassification without representation!" he yelled.

Then, one by one, police arrested the protesters and gently loaded them into two prisoner wagons for the trip up to E-5 for booking.

group of activist clergy. Thanks!

It's a good way of suggesting that this isn't just NIMBY of the neighborhood, but is a wrong to which people throughout Mass. should be opposed.

I light my home with candles.

I light my home with candles. Electricity is for squares.

Nat gas heat is overrated. I chop my own wood in Brighton. http://www.universalhub.com/2015/somebody-seems-be-killing-trees-brighto...

They let you play with fire?

How do you manage it with that white coat and all?

That's because people's lives are literally at stake if and when

the gas line goes in. Putting a gas line in any densely-populated area is playing with fire...it endangers the lives of people.

What other media were there, Adam?

I've been disappointed that most of the local media, including the two big papers, the network affiliates and NECN, don't seem to be reporting much on these protests and arrests.

Any idea why? I know Spectra is a big company, but it doesn't seem like a big advertiser that they'd be afraid of scaring off.

Is it because the protests aren't violent enough? Or don't fall into some convenient pre-existing narrative of class/race conflict? Or they're not blocking traffic for very long? I'm not being faceitious here - there seemed to be plenty of coverage of the PA pipeline explosion in April, and the legal challenges at least get back-page mentions, but there's almost zero coverage of a giant construction project inside Boston city limits that regularly has crowds of people protesting and getting arrested!

Actually, quite a few media types there today

Which was a little surprising. At least two TV camera people and several photographers with big gear and State Police press passes around their neck, i.e., mainstream-media types.

To be fair, I think most of the MSM around here has reported occasionally on the protests and the city's legal maneuverings. But they leave weekly coverage to the Bulletin, the Transcript/Wicked Local and me (and even I missed the protests/arrests this past Saturday). Maybe if the pipeline were going under Boston Latin School, there'd be more coverage.

A news helicopter came by after it was all over - I couldn't tell which one.

They did briefly shut Grove because of the protests

At least in the morning, police were letting cars head down Grove towards Centre on the side of the road not under construction (for residents living on Grove and side streets, maybe?). They shut the road for the protests, first because that's where a lot of people were standing, then to let the two prisoner wagons pull up and sit there before and during the arrests.

Ah, I missed that

They've had Grove St. closed duing the day for a few days. I didn't realize they were letting cars through going towards Centre.

Isn't one of the construction sites right at the corner of Grove and Washington?

When I see Horse-Boy from

When I see Horse-Boy from Google Street View I'll be impressed.

"No gassification without representation!" he yelled.

Funny. People yelled the same thing at the the other day.

Like the fight against the British during the Revolution?

Really, now. Me thinks not Rev. Gibbons. But nice outfit.

The way by which this obviously RISKY (750psi - across the street from a blasting quarry) Metering and Regulating station has been forced on all political representatives (local, state & Congressman - called the "Boston Delegation") who stood up for a local community that expressed massive objection and raised fact-based concerns at every step of the process, most definitely smacks of the "tyranny" that the early Patriots objected to.

When the Federal govt asserts "eminent domain" to steamroll over all local concerns and needs, in the name of a "public interest" they have failed to prove, that definitely has nothing to do with the ideals of democracy and self-determination the fighters of the American Revolution were aspiring to.

Take even 15 minutes to watch some of the surprisingly entertaining testimony in these Hearings before the DPU about the proposed ratepayer tariff, you will learn a lot.
They are eminently compelling, and full of significant information:

Actually, more with the ideals of

a republic not a democracy. But I digress.

I respect Commonwealth Magazine but the three links you shared are opinion pieces, I believe and as such, they are their author's opinions. They may be point on or not.

I personally do not think the pipeline is going to blow up houses once laid but you all have every right to protest like rebels of 1776. Best of luck to you.

where does the "without

Electricity prices are too high!
No more gas!

Bring back coal!
Oil heat for all!

is that this pipeline is not providing gas to anyone in Massachusetts. Spectra is too cheap to reroute the pipeline so it doesn't go by an active quarry.

The pipeline ends at a station already well under construction at Grove and Centre, where it will feed into National Grid's local distribution system, so, yes, local consumers will get the gas.

One of the allegations, however, is that the West Roxbury Lateral Pipeline (its formal name) is sort of a feint so that Algonquin can use other pipelines it's also building to get fracked gas to a port so it can be exported overseas.

Subsidies or not, solar and wind are poised to completely crush fossil fuels. Additional investments in such fuels are completely foolhardy, even if, according to some peculiar calculations, they look okay now.

Thank you members of the clergy and the Boston Police for showing the rest of the city how peaceful protesters can get their message across without disrupting traffic, spitting and screaming racial epithets at police and vandalizing property.

And be barely reported on

As opposed to other protests which actually got mainstream media attention

When you are correct about

When you are correct about something it is "self evident" and there is no need to try to scare people with visions of little old ladies' houses blowing up.

... Especially when they have been told, over and over and over again, that "Natural gas is clean and safe", posed atop images of babies hugging teddy bears.

And Boston and surrounds leak gas like a sieve. See http://www.heetma.org/squeaky-leak/natural-gas-leaks-maps/

And natural gas is NOT climate safe, since methane is more potent, and the upstream leaks contribute mightily to radiative climate forcing. Even if someone is conservative on those, it is far away from the "bridge to zero Carbon" that some tout.

Moreover, no player in the natural gas market is serious about "bridge to renewables" that they claim, because, if that were true, existing fossil fuel infrastructure, including natural gas, would be planned to be phased out, by 2030, and quite possibly sooner. Nobody puts that in their depreciation schedules.

Spectra Energy's safety record is bad, even if limited to New England.

Amen, and thank you.

"You may well ask: "Why direct action? Why sit ins, marches and so forth? Isn't negotiation a better path?" You are quite right in calling for negotiation. Indeed, this is the very purpose of direct action. Nonviolent direct action seeks to create such a crisis and foster such a tension that a community which has constantly refused to negotiate is forced to confront the issue. It seeks so to dramatize the issue that it can no longer be ignored. My citing the creation of tension as part of the work of the nonviolent resister may sound rather shocking. But I must confess that I am not afraid of the word "tension." I have earnestly opposed violent tension, but there is a type of constructive, nonviolent tension which is necessary for growth." - Martin Luther King, from his Letter from A Birmingham Jail, April 1963

Sky prism over the Grove in West Roxbury
Former head of homeless-shelter concern gets year in jail for embezzling nearly $1.5 million
Heron in the mist
West Roxbury's one brutalist building being torn down
DA moves to seize money found after man who was already facing trial as a drug dealer was arrested on new drug charges in West Roxbury
Didn't claim your new buildable lot off Millennium Park? Too late