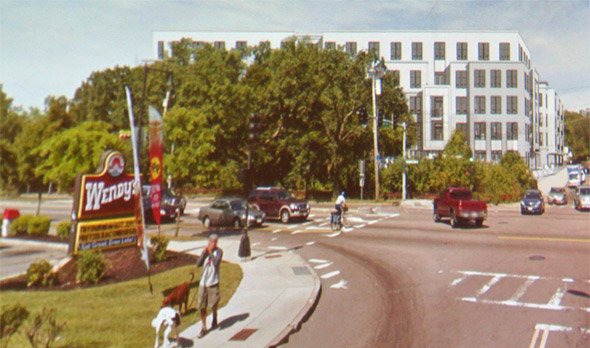 Developers of a proposed 137-unit residential building on Walk Hill Street near American Legion Highway told residents last night they've reduced the size of the proposed units - which would make the units a bit more affordable and let them remove a floor from one side of the building.

But residents attending a meeting of the Mount Hope Mount Canterbury Neighborhood Association said that while they appreciate the need for housing and the fact the developers talked of marketing owner-occupied condos, they remain concerned the building is still too large, especially given that it's in an area with virtually no public transit, which means residents would be more likely to drive on the already crowded Walk Hill and Canterbury streets and American Legion Highway.

Longtime neighborhood activist Steve Godfrey said his wife has already told him she wants to move if the building goes up as currently proposed.

Developers Charles Gill and Nabil Boghos say the building would help create a more vibrant residential area, which could lead to the sorts of stores and resturants existing residents say they want - a cafe instead of a Taco Bell, for example.

After an earlier meeting with the association, at which people asked for more affordable housing, Gill and Boghos's architects redrafted plans for the building, to contain one-bedroom apartments of 780 square feet and two-bedroom units with almost 1,100 square feet. The building would have 165 parking spaces, most in an underground garage. And a large, state-mandated green space would separate the building from the brook that runs along American Legion Highway.

Gill, who said he has already paid a crew to clean up the garbage-strewn brook and repaint - twice - graffiti-encrused fences along it, said his market would be Millennials and empty nesters who want to move to or stay in Roslindale. By reducing the size of units a bit, the market-rate prices should come down a little, he and his architects said, adding, that, as required by the city, 15% of the units would be marked down a bit more to make them more affordable to people making up to 80% of the area's median income.

But residents cited traffic as a key concern: Canterbury Street, from which building occupants would exit and enter, is barely a two-lane road as it is. And don't get them started on the intersection of Walk Hill and American Legion, let alone the hordes of drag racers and dirt-bike stunters that roam the area from spring to fall.

Residents said the building is fundamentally different from comparable buildings going up along Washington Street from Forest Hills to Egleston Square because those buildings are near decent public transportation, not like that single bus that only runs up and down American Legion once an hour on weekdays, which means the new residents would be driving a lot more.

And one resident said the traffic effects would be compounded precisely because of the Millennials Gill and Boghos would target. Millennials "are too mobile, too rapid, not to have two cars," he said, adding that they would move out quickly when they have kids, leading to the sort of resident instability the neighborhood doesn't need.

Some actual Millennials attended the meeting and said Roslindale can't just say no to all development without becoming even more overpriced than it already is.

Kristen Halbert, who moved to Roslindale from Cambridge and has put down roots in the neighborhood - she works on both the neighborhood Porchfest and the music program at the Adams Park farmers' market - said she would love to buy a condo in the area. Halbert, who is a graduate student in urban planning at UMass Boston, agreed with residents that 137 units is too many, but said she wouldn't want it to get way smaller if there's to be any hope for folks like her.

Another association organizer, Lisa Beatman, suggested Gill could satify the neighborhood and still make a profit by putting up roughly a dozen triple deckers instead of a large multi-family building. Gill said he doubted he could make that work.

The developers last week filed a formal "letter of intent" with the BRA. They estimated it would take them another two months to analyze traffic detail, review neighbor concerns and file a more detailed "project notification form" with the BRA. Once that's done, the BRA will appoint a neighborhood advisory group to review plans and give the public 45 days to comment on them.

I think there can be a

I think there can be a recognition that 1) this area is good for more housing and 2) that this specific proposal is too large for that site for reasons stated above. The biggest impediment is that it's not near any meaningful public transit. Even the large proposal in Readville has two nearby commuter rail lines. This is a very car-dependent site. It should absolutely be housing and dense housing, but 137 units doesn't seem to make sense.

The 14 goes by this proposed site. This bus connects to the Orange line at Jackson, Green E line at Heath St and the Needham Commuter Rail at Roslindale Village.

The frequency is not ideal. About 40-70min. However, getting a bus to run more often and longer is easier than creating a new route.

However, getting a bus to run more often and longer is easier than creating a new route.

While that may be true, it's highly unlikely that either would occur given the current state of the T.

The 14 comes by every 45 minutes or so during rush hour times, and upto an 80 minutes off peak, doesnt run at 8:00pm, and no service on Sundays.

the guy on the bike

looks like he's about to be hit by the red truck. kind of sums up how i feel about this proposal.

You can tell by the color saturation that this picture

was obviously taken way back in the 1970s, when it was 100% legal to run over urban cyclists.

All you can really tell by the saturation is that I have yet to properly figure out how to shoot a bright screen in a relatively darkened room (didn't help that I was taking it from off to the side, either, although that probably didn't affect the weird coloration).

Same thing happened with the house diagram at the bottom of my Back Bay story from the other day. All kinds of weird coloring going on there. Only difference was the original was in black and white, so I was able to remove the color distortion from the photo I posted by converting it to grayscale.

Oversized and So Ugly

Ugly, lot too small, and does not fit with other housing in the neighborhood. And all these new cars are gonna end up parked furthur down walk hill, to make the short walk to forest hills station. Also when is anyone gonna notify all the residents who live in the jp section of walk hill less than .25 mile away that this monstrosity is being built?

I think that people in the outlying neighborhoods of Boston need to start realizing that large buildings are going to be the norm and it's their freestanding house or tripledecker with yard that does not fit in the neighborhood.

Depending on what side of Washington Street you live.

Have you ever been to Calisi's?

Or anywhere near this place?

Sure, outlying parts of Boston need more housing. I, for one, am a cheerleader for most of the Roslindale and West Roxbury projects, but this is not a good spot for massing.

Go ahead. Go to Forest Hills, walk up Hyde Park Ave to Walk Hill Street, then up Walk Hill to Calisi's, then check out where this place is and why the main concern is traffic. And for the record, I did run close (ie, the other side of the Canterbury Brook on American Legion Highway) to here today, so I know what I am talking about.

No they won't because the

No they won't because the zoning does not allow for them without variances. Just because some people feel existing established neighborhoods do not have enough density does not mean they need to have significantly more.

Not a yuppie rant

but...........as long as yuppies overpay for oversized, ugly and stupid looking luxury condos, the developers will oblige by building more of them.

Build Absolutely Nothing Anywhere Near Anything

Tough to Argue for Maintaining a Neighborhood Fabric

For a site essentially surrounded by cemeteries. Even a single family has a density out of context. This kind of argument drives me nuts. Your biggest argument against change can't be that it would cause things to change. You need to actually demonstrate that the cost would outweigh the benefit.

I live right near this site and drive through that intersection all the time. Even if they just adjusted the timing of that stop light to give more green lights to Walk Hill, it should alleviate most of the concerns about traffic. Hell, even if they just figured out how to get that Wendy's to serve you a bigger in under 45 minutes, it would remove most of the traffic.

Why does every project review seem to require someone to make broad statements about some other group that is supposed to be bad for the neighborhood? Students and Millennials seem to be the latest boogeymen who are going to have wild keg parties 24/7 or drive 50 cars. It is nonsense, plain and simple.

"Millennials are too mobile not to have cars."

Huh? Everything I've been reading about millennials says that they're less likely to own cars than their parents. Also, it would be trivially easy to expand bus service here if the demand justified it, but the political reality is that the demand has to exist *first*, not the other way around. You'll never get the state to pay for a new bus route that no one is going to ride. Build the damned condos and then worry about the bus.