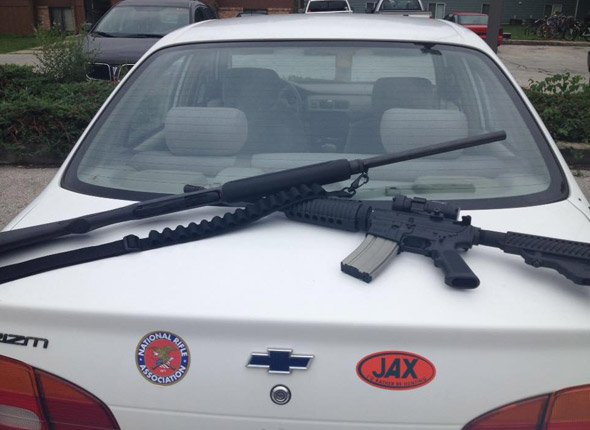 The picture that was worth a thousand words in plea deal.

Two men who drove halfway across the country loaded for bear and Pokemon rivals will spend the next year in the South Bay House of Correction as part of their education on our stricter gun laws.

James Stumbo, 28, and Kevin Norton, 19, both from Iowa, pleaded guilty today to illegal weapons and ammunition charges that stem from their arrest last August after police found an AR-15, a shotgun and 300 rounds of ammunition in Norton's Prism, parked near the Pokemon World Championship at the Hynes convention center.

Suffolk Superior Court Judge Rosalind Miller sentenced them each to the two years in jail recommended by the Suffolk County District Attorney's office. Both have already spent 335 days in jail, which will count towards their sentences. Had they gone to trial, they could have been facing more than 10 years in state prison on the charges to which they pleaded guilty and other charges that were dismissed as part of the plea agreement - which included possession of an illegal high-capacity feeding device.

Boston Police were waiting for the pair at the Hynes last August - alerted by convention staffers and Hynes security because of online threats the two made against other people planning to attend the convention. This included posting a photo of Norton's car - bearing an NRA sticker - with a shotgun and rifle on the trunk and a caption reading "Kevin Norton and I are ready for worlds Boston here we come!!!"

After getting out of jail, the two will be on probation for two years, with conditions that include staying away from weapons and the Hynes convention center. Miller agreed with a defense request to let the two, who have no prior criminal records, serve their probations in Iowa.

Stumbo, whose mother and brother flew to Boston for the plea hearing, was a factory worker; Norton worked in a grocery store before his trip to Boston.

Neighborhoods:
Back Bay
Topics:
Crime
Free tagging:
Pokemon
Ad:
Like the job UHub is doing? Consider a contribution. Thanks!

I hate that Massachusetts has mandatory minimums for possession of a gun but not for acts of violence like murder or rape.

Mandatory minimums are a dumb idea!

I feel bad for these fools.

I feel bad for these fools.

If a Pokemon convention got them that angry, I can't imagine what all these idiots running around catching Pokemon's now would do to them.

Feel better now that you got that off your chest tough guy?

side note, is it ok if we use derogatory slang for all nationalities on this site, or is it only cool if they're white?

"White" is a nationality now?

I think you might have unintentionally said what you meant, there.

isn't a nationality either, but if i used a slur for that you'd all have an issue. Just substitute nationality for race if it makes it any easier for you to understand.

Gaffin told me I can't take swipes at nationalities

"White" is generally a race identifier. I think you can swear, just keep it creative. Nude selfies on here would probably become self-regulating in a hurry.

Was that an actual quote from

Was that an actual quote from the two men? The closest thing to a threat I saw was "MY AR-15 says you lose." Taken in context with all the Pokemon crap, it's clearly just trash talk.

I should be happy, but I'm not

I'm as anti-gun as anyone, but I think these guys got a raw deal.

My take? They went way overboard with their online competitiveness but honestly I think it was all just hot air. They were two grunts (a factory worker and a grocery store employee) who lived in a fantasy world and got carried away. I personally don't think they ever intended to shoot anyone and I think the year in jail that they already spent is more than sufficient punishment for letting their fanboy exuberance get over the line into online threats.

What led you to this conclusion?

I don't think the guys the

I don't think the guys the gang unit catches with guns in the hood everyday get 2 years, certainly not for a first offense - and they are true terrorists. Also, these morons from Iowa did purchase them legally, unlike the our local miscreants.

But the guys the Gang Unit catch are carrying single handguns loaded with maybe 6 to 9 rounds, which gets you 18 months on a first offense. These guys had two long arms with hundreds of shells and cartridges. Not even a close comparison.

Terrorist? According to the

Terrorist? According to the evidence they had zero intent to harm anyone, which is sort of the definition of terrorism. Their apparent plan was to go the Hynes, play Pokemon, leave, and go to a shooting range with a friend somewhere in central/western mass before driving home.

If they had posted a selfie standing next to a marijuana plant with the caption "We're coming to Boston to smoke the competition", nobody here would bat an eye.

how many people has weed killed this year?

How many people have these types of weapons killed?

As for "zero intent", well, bullshit. They expressed a lot more than zero intent when they threatened people.

Coakley admits to two in the last five years. How many died this year from pistols?
If we're going to play basketball today, and I tell you "you're dead", it's generally accepted that I'm talking basketball.
Were they dumb? Ya. Were they going to kill all the pokemon players? Doubt it.

The only threats they made

The only threats they made was to use their level 3582 Charzard in the tournament...

RTFS above - Adam linked to the threats that they had been making.

But, hey, kiss your gun for me - I know it loves your attention and returns your affections.

They were plead guilty to

They were plead guilty to simply possessing these weapons (owned legally in Iowa then brought to Mass) and are serving a 2 year sentence for that.

You couldn't kill 300 people with an ounce of marijuana

And, in any case, if they did come here with marijuana, and each had less than an ounce of the stuff, the worst that would happen is they'd get a ticket, so maybe not the best of analogies.

They had one long arm each,

They had one long arm each, neither of which was on their person. The guys the gang unit catch usually have a .380 in their waistband. Personally, I believe walking around with an illegally obtained concealed firearm is a far more serious offense than having legally obtained (but illegal to possess) in your trunk.

Also, that scattergun most likely holds no more than 5 rounds.

As we all know

Competitive exuberance plus mass murder capability is a stellar combination most often used for the greater good.

They showed up in Boston with an AR-15 (with a high-capacity feeding device), a shotgun and 300 rounds of ammunition. That's a bit more than just a bit of overblown Internet slap fighting.

If what anon posted is true, then that really plays into my "We mean no harm" argument.

Their apparent plan was to go the Hynes, play Pokemon, leave, and go to a shooting range with a friend somewhere in central/western mass before driving home.

You need to learn the difference between a counterfactual scenario masquerading as a convenient excuse, and reality.

They threatened people on line well before this, then posted the weapons that they planned to bring to Boston.

If that isn't enough for a year in the poke I don't know what is!

They still illegally transported firearms across state lines, which is crime enough without considering intent. To do that just in New England, you need a carry permit in almost every state you pass through.

A high-capacity feeding device is a scary name for a magazine or what the ignorant call "clips." Its not some special out of the norm device to increase the killing capacity of the gun.

And yet they are illegal in Massachusetts and subject to a different penalty than just the gun itself.

Because MA has some of the

Because MA has some of the strictest gun laws in the country. Any magazine over 10 rounds is illegal depending on which firearms license you have. LTC-A is the only license that allows you to legally possess guns/magazines that can hold 10 or more bullets. If these kids have a magazine holding 11 rounds it would be considered illegal. I'd hardly call that a "high capacity" and you are correct in that its illegal in MA, its because MA has taken a more strict stance on bullet capacity compared to other states.

sounds like they were loaded for mahem but were caught before they had a chance to act.
Think Tim McVeigh and the Columbine shooters. not sure why people are defending these idiots.

An accurate portrayal of your

You mean people who believe

You mean people who believe that "the right to bear arms shall not be infringed" is worth the paper it's written on?

Yes, them! The ones who conveniently forget that the clause begins, "A well regulated militia, being necessary to the security of a free State..."

yes, but it ends with "the

yes, but it ends with "the right of the people to keep and bear arms shall not be infringed"

What you're saying is that their should be regulations that don't infringe rights? 'Cause I'm not entirely sure what that means.

Or you could do the intelligent thing and understand that the first two clauses circumscribe the scope of the final statement, i.e. there should be no restrictions on private weaponry that prevent the existence of a well-regulated militia.

You're not well schooled in MA history, nor the law

The Second Amendment was explicitly written to ensure the right to own arms and potentially use them for defense - whether individually or as a people's militia. I suggest you read up on the debates about the Bill of Rights in the 1700s, then continue on to read up on gun seizures in early Soviet Russia, Maoist China, Nazi Germany, etc.

To be sure these two are ignorant-interstate transit of firearms is a big no no without checking the law-but they come from a place where guns are imbedded in the local culture. I'm surprised they didn't have a pickup and a gun rack though!

Never bring an assault rifle to a Pokeman party

Flaming manholes heat up Boylston Street outside the Pru
Judge says former celebrity chef no paragon of virtue, but there were too many questions to find him guilty of sexual assaut
Art has a message
Jury selection starts next week for former celebrity chef accused of sexually attacking woman at the Pru in 2017
Liquor-license musical chairs held up due to lawsuit
If only he'd waited a couple days: Mask hater not allowed on a T bus last week now has a BOLO issued for kicking the bus door