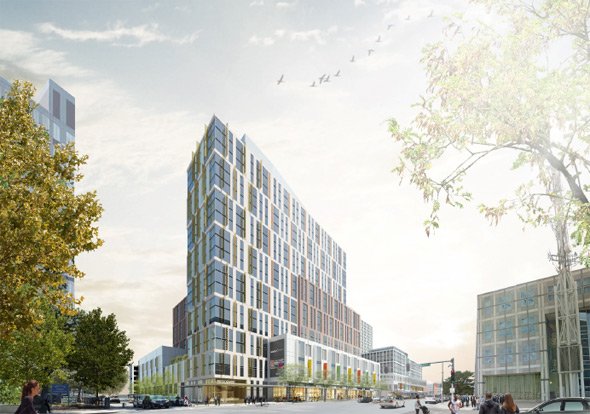 Developers of the long stalled Tremont Crossing project in Roxbury last week showed off their latest plans for the proposed development, now smaller than the plans they showed off earlier this year.

In a presentation to the BRA resident group overseeing the project, Elma Lewis Partners, LLC and Feldco Development Corp. showed a proposal that eliminates a planned hotel and student housing, reduces office space by 100,000 square feet and reduces the height of the tallest building by 90 feet. This also let them slice two floors - and 216 spaces - off a planned parking lot.

Over the years, the developers have come up with a series of plans as the 7.25-acre parcel across from Boston Police headquarters continues its transition into an urban wilds.

In August, the BRA board gave the developers more time to firm up their latest plans, after BRA staffers said the developers were moving in the right direction. This whole saga is a joke.

A sweetheart deal all in the name of diversity and back scratching of the worst kind. Let a qualified developer who knows what he/she is doing build something that works for the neighborhood. This property has great potential.

It doesn't, by definition,

It doesn't, by definition, work, if it doesn't meet the local zoning regulations. Developers don't decide that. Therefore, there needs to be careful consideration of what is allowed.

What does that have to do with the initial critique here?

The project has taken forever because the BRA gifted it to a diverse "development team" that has no idea what it's doing. A real developer would have addressed zoning issues, obtained proper approvals and be under construction if not complete by now. These buffoons have mucked this up so badly that they are running the risk of missing this historic and unprecedented development cycle.

The "initial critique" said that is was a good fit for the property. It's not if it doesn't comply with the zoning. That is what it had to do with the post.

Disagree. Most of Boston's

Disagree. Most of Boston's existing built environment does not comply with current zoning but it "works" anyway.

That's not the kind of

That's not the kind of housing people are talking about creating.

That kind of housing is

That kind of housing is (sadly) not financially viable in the current environment, because the long variance approvals process drives up costs and parking requirements still too high (high land and construction costs mean triple-deckers are only remotely viable without off-street parking).

That's not then an excuse to

That's not then an excuse to overbuild if it changes neighborhoods to make them less desirable for people already living there.

You're entitled to your

You're entitled to your opinion there, just don't try to use the existing zoning as some kind of final say on what the neighborhood prefers.

If the majority of people in

If the majority of people in an area don't want changes to zoning that are more favorable to developers, than it is what they prefer.

What would happen to the existing NCAAA museum

at Abbotsford on Walnut Street?

Even with all the development surrounding the O'Bryant/Madison upper field (that features, imo, the most spectacular skyline view in Boston), the soccer nets still can't get properly attached.