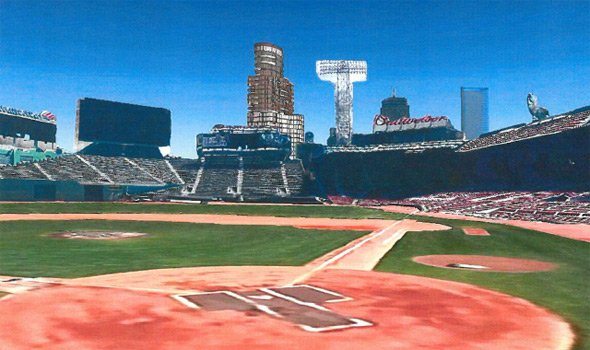 Gray Monster: Rendering by the Red Sox of proposed building

The Red Sox, the Fenway Civic Association, volunteer groups that look out for the Muddy River and the Emerald Necklace and Berklee College are all raising questions about shadows and winds that could be generated by Trans National Properties' proposed 29-story tower at Charlesgate.

As first reported by the Globe, the Red Sox object to the "Manhattanization" of the area around Fenway Park, specifically to the fact the building would be right in the face of fans. Also, the teams points to a statement by the developer's own consultants that the tower would mean brisk wind gusts along Ipswich Street.

The Sox's comments are included in a collection of comments from the public (5.7M PDF) to the BPDA on the building, which would have 295 residential units.

In addition to the Sox, Berklee College, which owns Boston Conservatory of Music buildings nearby, also points to the wind issue. Berklee also raised concerns about the location of the building's loading area and, during construction, hoists and tower crane, next to its 132 Ipswich St. classroom building "may well interfere with teaching and learning in the Conservatory's building."

The Emerald Necklace Conservancy notes that the building, at 340 feet in height, would be 2 1/2 times taller than allowed under zoning for the area.

Adequate reasoning has not been presented so far to support the assertion that the height of the building needs to be in line with the other Gateway location. ...

Olmsted could not have anticipated a future in which the parks would be overlooked by very tall buildings, changing the feeling of getting away from the 'bustle and jar of the streets."

The conservancy adds that the new building

The Fenway Civic Association says 2 Charlesgate is fundamentally different from the Pierce high rise going in at the other end of Boylston because that building is separated from the neighborhood's low-rise residential areas and did not seek as significant an increase from existing zoning as 2 Charlesgate.

The association adds the proposal says it's transit oriented because of the 55 bus, but that bus is already jammed at rush hour. "How would the additional influx of residents impact public transit capacity?"

And the group says it is "deeply troubled" by what it says is Trans National's attempted "paying off" of neighborhood groups with cash payments in exchange for support.

The Fenway Garden Society also raised the cash-payment issue, and shadows - and said it's concerned about possible glare from the glass-sheathed building. Trans National offered to install fins or louvers of some type to cut down on the glare, but the garden society says that would then raise the risk of ice forming on them and plummeting to the sidewalk below.

Pfft. They don't actually give a (expletive) about that. It's like Ed Ansin suing because channel 60 won't properly cover Boston with NBC. Not your concern.

If only it were possible to increase transit capacity to meet demand.

I'm not arguing that this building is right-sized or not; I'm pointing out that the 55 bus is but a pittance of the transit richness of this location.

won't use the bus anyway

Let's be honest, the majority of people who can afford to live there won't use the bus anyway. Some will but I wouldn't plan on a lot of them.

Even the ultra-rich (although lets be clear, most of these units are merely geared toward the pretty well off) don't like driving in downtown traffic. The whole reason they're paying a premium to live in a location like this is so that they don't have to drive.

If the bus line gets too crowded, add more buses.

"Getting away from the bustle and jar of the streets"

If they really wanted to accomplish that in the Emerald Necklace, they'd ban car traffic along it. Compared to that, being able to see a building is nothing.

such a development would also impact the light hitting Fenway Studios on Ipswich St. These artists can't do their work without it.

We Are The Village Green Preservation Society.........

If you had gone into a coma around 2001 and woke up today and heard that the Fenway neighborhood was opposed to Manhattanization you would have looked at them queerly because you as the patient could have easily pointed out the Alexandriazation had already consumed Boylston Street between the Shell Station and the former D'Angelo's site.

TNP, the proposed developer of this site, lost out to the more juiced than 1998 Sammy Sosa Millennium Partners for the redevelopment of the Federal Street garage. Naturally they have turned their focus to a property that they already have owned for years.

This site is a transit oriented site. You are less than a 5 minute walk from both Kenmore and Hynes. The Sox, who have been given everything they want in the Fenway, have a hell of a lot of chutzpah when it comes to saying there is too much commercialization and development in the Fenway.

This building, like the Boylston and Mass. Ave tower that was stupidly killed 20 years ago because of concerns about the sacred Northern Light to Fenway Studios, is an urbane, well placed, well thought out edifice, located in a proper setting.

Last time I checked, sunlight was pretty good for plants, and this tower is not going to block light from those people who use yours / mine / ours public land for their tomato growing (and don't pay for it).

Get this built. Make the developer pay to have someone skim the Muddy River once a week as part of some kind of mitigation. That should be enough to get approvals. Hell, you can keep a camera up on the tower pointed into the Fens to see which junkie lights the reeds on fire each year. It's a win / win.

Fenway Studios was built over a century ago to be an artists' building, and its site was selected specifically because it would be across the street from a wide railroad right-of-way (now the even wider Turnpike right-of-way) and would therefore have sunlight coming into its windows. This should be respected.

(Not really relevant to the separate Charlesgate project).

The light on Fenway Studios should be considered, but our society is not beholden to the decisions made by people 100 years ago facing an entirely different world.

I picked my house because I liked the big tree in the neighbors yard. Should I be able to prevent them from cutting it down to build a swingset for their kids?

Maybe the developer can trade them some of the sunny units in the new building.

You think you're joking but

You think you're joking but in Boston...

And the group says it is "deeply troubled" by what it says is Trans National's attempt to "paying off" neighborhood groups with cash payments in exchange for support.

A corporation paying off neighborhood groups with cash payments in exchange for support? In Boston? Ya don't say, kid? Really? I'm shocked.

This might sound a little far-fetched, but if that building goes up, the Red Sox organization ought to have a contest:

$1,000,000 prize for the first baseball player, either a Red Sox player, or someone on a visiting team, that actually hits that building (as proposed) on a homer. :)

Although I don't live in Boston, I'm siding with the Sox on this.

No batter has ever hit a ball over that wall in the history of Fenway Park. The longest hit is denoted by the red seat in the bleachers, hit by Ted Williams in 1946. That was a bit over 500 feet.

Let's make it one BILLION dollars!

I wonder why the team would be opposed to something like that. (/s)

What is that, a stadium for ants?

If lack of an adequate public transportation system is reason enough to stop a project from going forward, the entire city's development should be frozen ....

I hope you are joking because

I hope you are joking because I have been to housing meetings and there are actually people legitimately making this argument.

Remember when the Sox opposed

The Pru and the Hancock because OH NOES YOU CAN SEE THEM FROM THE BASEBALL STADIUM!

"Olmsted could not have

"Olmsted could not have anticipated a future in which the parks would be overlooked by very tall buildings, changing the feeling of getting away from the 'bustle and jar of the streets."

It's an urban park. Tall buildings will look over it.

Tall buildings were built along central park within Olmsted's lifetime.

I must have missed the coverage when this building was first proposed back in April. That's, uh, quite the bold design they've put forward. Looks like one of the Arcologies in SimCity2000.

That said, NIMBYs should die in a fire, the city needs more housing, and the quibbling over the capacity of the 55 bus when there are two T stations within 1/4 of a mile is inane.

Transformer wends way down the Fenway
Feel the dread: Green Line's dead
James Harold, owner of the Rat, dies, 79
Thank goodness for the 39 bus
Somebody at Fenway was a real asshole today
We imagine it sounded something like: SKEEERONNNCH