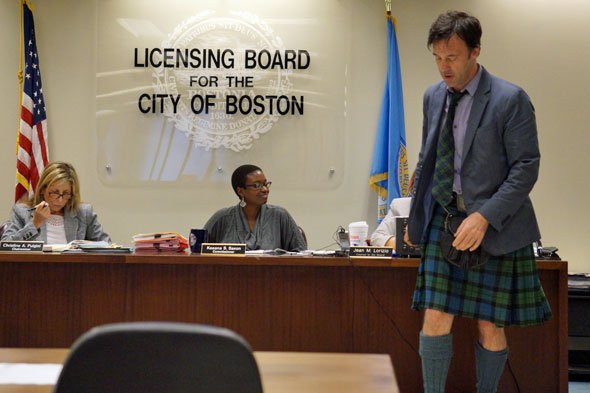 Haven owner Jason Waddleton after handing some paperwork to board.

UPDATE: The board approved the license request.

The Boston Licensing Board could decide tomorrow whether to let Boston's only Scottish restaurant add whisky to the Scottish beers it now offers.

Jason Waddleton, owner of the Haven, 2 Perkins St. in Jamaica Plain's Hyde Square, told the board today people constantly ask him why they can't get some whisky to go with their haggis, Scottish eggs, smoked salmon and other Scottish delicacies.

"The question always comes up, 'where's the whisky?' " Waddleton told the board, adding, "I always feel apologetic," when customers ask, because the Haven currently only has a license to sell beer, wine and cordials.

On Sept. 1, the board got five new full alcohol licenses to dole out. After a month of hearings from restaurants across the city seeking them, the board is set to begin deliberations tomorrow. The board also has 20 neighborhood-specific licenses to award in Dorchester, Mattapan, Roxbury and Boston "Main Street" districts.

Waddleton opened the Haven six years ago. He said that while the restaurant is mainly a neighborhood place, it has become a destination for people from across the country. He noted it served as a gathering spot in the run up to the Scottish independence vote in 2014.

Waddleton's bid had the strong support of the mayor's office and City Councilors Matt O'Malley (Jamaica Plain, West Roxbury), Michelle Wu (at large), Ayanna Pressley (at large) and Annissa Essaibi-George (at large). The mayor's office praised Waddleton as not just a good restaurant operator but somebody active in community affairs.

Then demanding the right to sell Limoncello.

It would be like opening an Italian Ice cart that also served aperitifs that wanted to add grappa.

Oh, no! Not lemoncello! THE

Woo Hoo! hope they get this

great spot, hope they get the license!

I've only been to The Haven

I've only been to The Haven once, but it's a really cool place. Hopefully they get approved for this. A Scottish restaurant that isn't allowed to serve Scotch seems like insanity.

seems like Massachusetts. I'd love the state to shed the reputation as the no-fun epicenter of the east coast some time during this life -- leave that shit to the Mormons out in Utah.

"If it's not Scottish, it's

I wish I'd been paying attention - I would have tried to be present for this one. Or would have written letters in approval. This is a perfect example of a Need for the license.

The whole team there are Good People.

As long as the stuffie's the real MacKay.

I've known Jason for over a decade, from back when he was tending bar at Matt Murphy's.

He's a gentleman. He treats people well, and expects the same kind of behavior from others. Any time things might get out of hand at The Haven (which is very rare!), he calmly steps in and de-escalates the situation.

I have no doubt that this behavior would continue if he had whisky and/or whiskey. If you haven't been to The Haven, do go check it out. It's good stuff.

Good job with the spelling, Adam! ;)

What's worn beneath your kilt?

Nothing, everything's in good working order!

I hope they get the license and I don't even like whiskey.
But, I do like the restaurant. Has the best burgers in town!

Does anyone know off the top of their head what clan tartan pattern he is wearing? I tried to research it online and quickly got overwhelmed by the number of clans/patterns in existence.

If I had to guess, I'd go with Campbell because the tie has a similar pattern to the kilt, but with some white in it. Campbell comes in a wide variety of variants (more, I think, than even Stewart), so it might explain why he's making the rookie mistake of wearing a tie that doesn't match his kilt.

I suppose it could also be either Murray of Atholl (and I'm just not seeing the red pin-stripe), or Black Watch and it's a weathered specimen so it seems a bit less dark than I'm used to.

You just called a Scotsman a rookie?

If he's mis-matching his tartans?

I sure am. All purveyors of fine Highland apparel will sell you a coordinating non-tartan tie.

In the interest of positivity, though, I do appreciate that his kilt is the proper length, and not too long like many men tend to wear theirs.

I agree. If men wear a kilt

I agree. If men wear a kilt too long, they develop a certain reputation. If they want to be taken seriously, their kilt better be up in the highlands. It's a strange double standard.

The owner also goes by his hyphenated name with "-Mackay" and that looks like the tartan.

I think you are right.

I think if he danced a jig,

the license would of been in his pocket.

Wrong side of the water

Let me get this straight

They want a license for a healthful tonic like whisky, but they can just sell a dangerous substance like Scotch eggs to any unsuspecting patron who doesn't know what they're doing to their arteries?

Scarce credible, as one of my grandmothers would have said.

you haven't tried the Scottish Deep Fried Mars Bar, then?

I really hope they get this. They've been really good to the community, even donating time and manpower at my local schools fundraiser, the Burger Slam. They deserve it!

What a scam the licensing

What a scam the licensing board has going.

They get to spend all day

They get paid to exercise

They get paid to exercise their authority in such a way that forces business people to put on shows for them in hopes of getting a license. The way they operate people actually think wearing a kilt or telling them about how great a Bostonian they are will get them a license.