Three more protesters lock themselves to gates of West Roxbury gas plant; are cut out and arrested 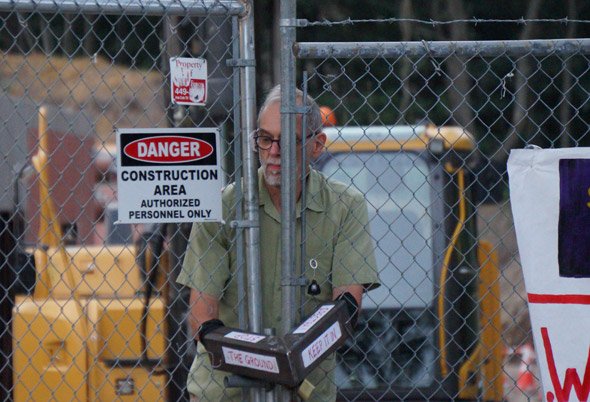 Tom Macdonald of Roslindale locked in at Spectra plant.

Around 6 a.m., three protesters - from West Roxbury, Roslindale and Cambridge - had themselves locked to each of the gates at Spectra Energy's natural-gas transfer station at Grove and Centre streets.

By 7:20 a.m., after the Boston Fire Department declared a "tech rescue" and brought in a couple dozen firefighters and commanders armed with bolt cutters and saws and EMTs arrived just in case, the three were all unlocked and put in the back of police wagons for the trip down to E-5 for booking.

They were the latest to be arrested in protest against Spectra's high-pressure West Roxbury Lateral pipeline, which will pump gas into National Grid's lower-pressure network via the "metering and regulating" station at Grove and Centre. Opponents say the pipe doesn't belong in a densely populated neighborhood.

Cambridge protester, 78, locked in at one gate: Firefighter makes room to bring in the portable saw: Macdonald being led to prisoner wagon: Once Macdonald was freed, firefighters turned their attention to Tim Clancy of West Roxbury: Clancy was led to the prisoner wagon by a K-9 officer - who left his dog in his cruiser: Part of the pipe complex at the plant: Protests have their place when they're done responsibly, but

I think that when people lock themselves to gates or even to each other, it's going a bit too far, safety-wise, if one gets the drift.

One does get the drift, indeed

The firefighters were very careful with the cutters and saws - they talked to the protesters to find out how far their hands extended, they shielded them with their jackets to make sure they didn't get hit by any flying debris and they had both a fire extinguisher and a charged fire hose on hand, just in case (and as mentioned, there were EMTs on scene as well).

Glad to hear that the firefighters on the scene were careful, an

that there were EMT's on the scene as well, just in case people got injured, but that doesn't change the fact that I don't feel that locking themselves to gates or to each other is a wise idea.

Bad use of resources

Spectra reimburses the city for the cost of these responses, apparently.

Around 9 a.m., at least one protester was locked to the actual pipeline, at Centre and Glenhaven. After police read him his rights, firefighters climbed down a ladder to cut him out.

How exactly are those devices locked to the gate? It looks like they should just be able to slip their arms out of those right angled boxes.

They handcuff themselves inside so firefighters are forced to cut them out. Same trick the BLM protesters did with the concrete barrels on I-93 a couple years ago

Without seeing how it worked, my first thought was this:

"Are you just holding on to the can?"

I support protesting this

And maybe some politicians should be protesting too.

But try to protest in a way that doesn't tie up the fire department.

What a bunch of jerkoffs. It's like these idiots in that Catholic church in Scituate. If you don't like what's happening with the property, buy it or STFU.

Will,
These people are protesting to try to save lives. High pressure gas does not belong in a densely populated area let alone across from an active quarry. They are building this in people's backyards, near two elementary schools, and an elderly housing complex. The people in Scituate were occupying a space to hang on to their past. This protest is to protect the future of an entire community labeled as the "incineration zone.'

According to the prior owners

According to the prior owners of the property, Spectra Energy threatened to take it by eminent domain if it was not sold to them. Spectra Energy, by the way, is a for-profit company, not a public utility. They also have eminent domain rights to the streets for their pipeline.

Where have you been?

Politicians ARE protesting and fighting this. You don't even need to leave UHub to read about it.

And to Will LaTulippe below, how are people supposed to buy property to prevent this? It spans several towns and communities.

And it doesn't matter how many towns it spans. It's a (expletive) pipe. I could buy six inches of land that it passes through, take a jackhammer to it, and make it wholly useless.

And yes, I know there's digging laws, but I don't need permission, just forgiveness. Also, I support this project. The less we trade with the Saudis, the better. It has to exist somewhere.

The pipeline goes under public streets, could not buy anything. No one found out about the station or the route until the permit was already given. Pipeline my be necessary but having a metering station across from a active quarry is just foolish and reckless. That is the main point residents have. I know some protesters have other point of view against fracked gas

Pipeline my be necessary but

Pipeline my be necessary but having a metering station across from a active quarry is just foolish and reckless.

And what credentials qualify you to know better than the engineers who said there was no actual danger?

That's what the US Department for Homeland Security in 2011 described building above ground high pressure transmission natural gas regulating in a densely populated neighborhood. One breach of any type (IED) of the West Roxbury Lateral Regulating Station and 30 square blocks and 1500-2000 men, women, & children would be incinerated IMMEDIATELY!!

I worry about the blasting and high pressure gas

I live next to Draper Field 6/10ths of a mile from the station construction site.

Sometimes I work from home in my basement office and at times they blast at the quarry which shakes the house to the point where stuff has fallen over on my shelving units. It's a man-made earthquake. I have cracks in plaster in several places and I have to believe at least some of it is from the blasting,

The station is across the street from the quarry. I hope they build this high pressure equipment strong enough to stay intact with the blasting.

Yeah, I worry a bit.

Um there is actual danger

the engineers,paid for by Spectra say it is marginal. No third party engineering study has been done because no engineering firm will do it out of fear of Spectra and the other gas companies I live withing .3 of mile of the quarry and the blasting there has moved neighbors foundations. . So yes i have doubts about safety. And why put it in a place where there is risk? oh yes they got a deal on the land......

They don't know the actual risk

They chose to omit an analysis of that risk from their risk assessment.

Just like Fukishima omitted an analysis of the hazards of grid failure and tsunami from their analyses of risk.

Just like Bhopal omitted the potential risks of reducing maintenance staff and limiting them to a single shift.

I could go on. The point is that risk assessment only assesses risks that it assesses. Choosing not to assess a risk is not the same as there being no risk or minimal risk - it just means blissful ignorance.

That lady with the hat looks entirely too happy to be chained to that gate..

She was smiling at me

More important, for the camera.

I get protesting against

I get protesting against something you feel strongly about, but for as long as these protests have been going on I'm not sure it's moved the needle any. Now it's just getting to the point where it's selfish. Looking at one of those pictures, it seems at least 4:1 Firefighters to protesters, hogging up resources. I do admire their tenacity, but at some point they need to pack it in and realize this thing is getting built. Or at the very least, protest in such a way that emergency personnel aren't being "wasted" on scene.

Or spend their time doing other things

How about persuading the state to require the utilities to put up a $1,000,000 bond per house in a possible blast zone plus $5,000,000 per resident living in that zone. Make it extremely expensive for utilities to screw up and maybe they'd be less inclined to take as many risks.

You already know it, but the

You already know it, but the State wont bite the hand that feeds it.

Again, SPECTRA pays for the

Again, SPECTRA pays for the municipal expenses. And the more they go into cost overruns, the more difficult it becomes to justify to their shareholders. The fact is, that these companies budget for protest & opposition. The problem for SPECTRA in this case is that they grossly underbudgeted. And now they are paying the price. More power to the protesters fighting abuse by a corporation that places profit over people. Keep it up.

And now Spectra is $3B

And now Spectra is $3B further in the hole as the MA Supreme Judicial Court ruled yesterday that MA electricity ratepayers will not finance gas pipeline projects. Spectra investors are now on the hook.

I really appreciate UHub's coverage of issues like these, cars in Boston, bikes/pedestrians and their motorized enemies, etc. So I am wondering if you ever would consider adding a topics/issues index to the site which might include reader/contributor references as well?

For us non natives, recent history (20th C onward) and current events are often inscrutable, and your coverage and respondents contributions are extremely valuable, and of course, colorful.

I have no idea how much work this would entail, so if unreasonable, mea culpa and thank for your consideration.

There are, essentially, indexes for the stuff I cover - the linked tags you'll find at the bottom of posts.

Going beyond that would probably mean some sort of Wikipedia-like effort. I actually started my Boston online career that way - with a directory of links to useful sites and other resources (such as explainer articles). It's a cool idea, but it's a lot of work, partly just the organizing, but especially ensuring it's up to date, and I've found that, for all its problems, Google can work pretty well most of the time on specific topics.

Or am I misunderstanding what you're saying?

Tags are useful, but you sort of have to know what you're looking for in order to use them for hyperlocal and colloquial topics, a la massholes, for example. Maybe some journo student would like to do an internship....

Chase wins approval to ease critical ATM shortage near Holy Name rotary in West Roxbury
Receding Charles River has exposed not just mud but invasive snails
Not enough rain in Stony Brook Reservation, part of which is now on fire
All that rain had to go somewhere
Serene green queen
Charles River drops below a beaver's knees in West Roxbury