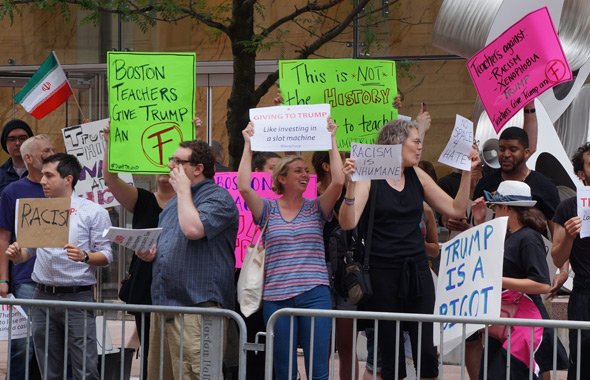 A few hundred protesters and curious people on their lunch breaks waited outside the front entrance of the Langham Hotel on Franklin Street at lunchtime, waiting to boo against Donald Trump.

But even as police brought in a city street sweeper to block Franklin at Pearl Street and maintained a large presence on Franklin, Trump entered the hotel from an entrance at Oliver and Milk. Trump BFF Ernie Boch Jr., dressed for a day on the water, however, was booed when he walked in the front entrance about 40 minutes before the fundraiser. Early on, before police cleared Franklin, a few Trump supporters manned the sidewalk on one side of the hotel entrance, including a woman who explained to a couple of local reporters how she loved Trump as much as she hated them: Later, a more dedicated Trump fan, dressed in red, white and blue, joined the protesters while waving a large Trump banner. He and they proceeded to wage a sign war: He kept trying to wave his banner so camera crews could see it; they kept trying to hide it with their own signs. As protesters chanted slogans like "Hey hey, ho, ho, racist Trump has got to go," he bopped along to their beat. When it was reported that Trump entered the hotel from across the street from "one of the best burrito joints" in Boston, I replied that they must have meant down the block, because Sabroso's isn't as good as Villa Mexico Cafe on Water Street.

Am I correct? Didn't Ernie's dad negotiate a deal with Subaru as one of the first importers of their vehicles that the "Bochs" get a piece of the action on every Subaru that is sold? Sort of interesting insult that all those Subarus in the very blue state of Massachusetts are funding a Republican donor who seems to delight in behaving like a moron. His politics aside, from the vanity rock band project, to the super-creepy cartoon logos he runs on TV and always looking like he just rolled out of bed, it's enough to have cemented to me that under no circumstances would I spend any money at any of his businesses.

If I recall, he actually sold the stable of car dealerships off (keeping the corporate Subaru cash flow), but the new owners kept the Boch family name on the stores because of the long local history. They must spend their whole day throwing up in their mouth while Ernie Jr is out and about "promoting " their brand.

A friend who works in car sales tells me Boch gets about $1K for each Subaru sold in New England. He may be exaggerating (as car sales people tend to do) but I'll bet if the typical Subaru driver was aware of this they'd be just as outraged as if they knew that the diamonds on their jewelry were mined with slave labor. Which is to say, they would pretend they just didn't hear that.

Not just a lucky sperm

I was out there and watched both the protesters and the motorcade come in.

The protests outside were loud/raucous and there was zero chance they were going to have him enter the front of the building out in the open. Anyone was able to walk right up in front with no security screening. Not a Trump fan, but this was a smart move on the part of police/secret service.

Quick observation: He has just as much security as Obama does in his motorcade. I've seen the president's motorcade many times and this was about as close as you'll get to that. NUMEROUS SUV's with SWAT team and major weapons surrounding the motorcade.

Did just try and kill him!

Why do we have to close down

Why do we have to close down airports, interstates, and entire neighborhoods just because a VIP comes to town? Keep the roads open and let them get moved around in an army ASV. If it's secure enough for soldiers in a war zone it should be secure enough for Obama or Trump.

VIPs have to dodge sniper fire under these conditions.

As of noon, I'd estimate there were about 50 active demonstrators, and a few hundred curious gawkers on lunch break. Demonstrators were loud, I'll give em that.

Anyone who didn't realize that Trump would come in and out through the "underbuilding" entrance is an amateur (not to say that anyone could/should have gotten close, but please, an open-air uncontrolled entrance?)

Second, I am not a gambler but $10 says that woman in pink from with the "We love Trump" sign is in from New Hampshire. I know I'm a bigot for assuming that based on her looks and what appears to be a 90s era scrunchie on her wrist, but hey, an eye for an eye, right Trumpeteers?

Lastly, think about the fact that Trump's next stop is Bangor (don't talk to me about 1 electoral vote, please). I have not yet been convinced by anyone that Trump will not just decide that he's out by late September, withdraw from the race, and leave the once at least somewhat respectable Republican Party to put up a sacrificial lamb (or, alternatively, someone who has no real chance of winning, but who could later be billed as a "decent man", who "put himself in the line of fire for the good of the Party and the Country".

Really, this whole thing is almost as shambolic as the Brexit debacle. I can't shake the mental image of Ronnie and Maggie sitting together somewhere beyond the grave repeating the 80s equivalent of "WTF!?!"

It is hilarious that the sign the trump lady in pink is holding looks like it says "We Love Frump." You didnt have to hold a sign to broadcast that fact lady.

Plausible. This whole cycle seems strange, and the GOP obviously doesn't want him. I could see sinking in the polls and choosing the quit instead of losing.

Bangor? I only just met 'er

I thought no state only had one electoral vote. Maine has four. Yes, I had to look that up.

So if Trump wins one Maine congressional district but Hillary wins the state, Trump gets 1 electoral vote and Hillary gets 3. Most other states are winner-take-all.

Thanks Ron for explaining that.

Be honest Adam! It was about 50 protesters and hundreds of onlookers on lunch break.

Yeah, there were a lot of just curious people on their lunch breaks, but there were also more than 50 protesters. I'd guess at least 100.

...as a sea of blue oxford shirts at the edges of the protest. We all have our uniforms.

100 includes paid protesters SEIU brought in. Some people protesting had purple SEIU lanyards. And you know I'm right because SEIU has had members at EVERY protest since Occupy.

I was there around 1PM and I'd guess less than 50. Way fewer than I thought there were going to be. Far more people taking pictures of them. They were loud, though!

You are slipping as a

You are slipping as a reporter Adam.

That would imply I was ever at a great height

Glad to know you thought I'd been up there.

You're great, the best in fact

When it comes to local stuff. But when you interject you political bias it shows.

There were at least fifty people with signs that headed up toward DTX and into the line of cheap lunch places that way after the rally.

As a local office-dweller who

As a local office-dweller who strolled through around noon (flanked by fellow white collar anti-Trumpsters), I'd say the protesters were much closer to 100 than 50. Keep in mind the crowd took up the entire block on Franklin in front of the Langham.

Particularly moved by Jews Against Trump (Sign read: "We've seen this before" !!!) -- a sobering reminder of what happens when mass insecurities seeking shelter take hold. Terrifying.

I was one of three people with that sign

One protestor had a professionally printed sign that came from this organization. The other two of us, after seeing it, hand-made our own signs with the same message.

Count didn't seem to matter too much, though I would have estimated more than 100 less than 200. I work on High Street and we could hear the chanting inside the building. The ones who were there got plenty of volume going.

On my way back from lunch I was stopped front row for the motorcade to pass on it's way out of town. Nothing particularly special about it.

i would even say 50 is generous... I was there at about 12:45 and it seemed like maybe a dozen people chatting/drumming.

Globe also says 100, and the picture does not look like the small drum circle who are trying to paint.
http://www.bostonglobe.com/metro/2016/06/29/trump-fund-raise-financial-d...
But I'm sure you will claim its a conspiracy.

I keep hearing how weak the

I keep hearing how weak the protester crowd was.

I always suspected he was a rear entrance kind of guy. The only front entrance he could use, would be one that he's got his name plastered all over the front. Maybe that's why the lettering is so big, because no one else, could fit it when he enters....because you know, he has such large hands.