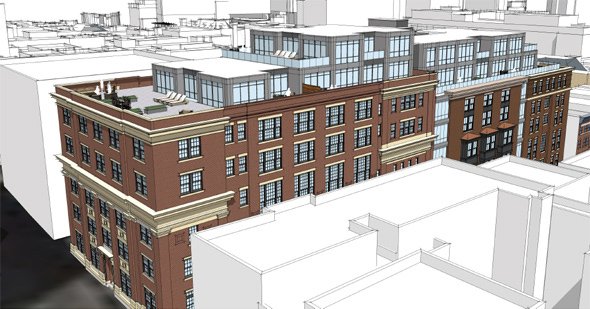 A developer last week filed detailed plans with the BRA to convert two former Suffolk University buildings on Temple Street behind the State House into a 75-unit luxury condo development.

JDMD Owner, LLC, of Dedham, says the project will meet what it says is "significant need" in Boston in general and Beacon Hill in particular, for "high-quality housing," as well as rid the neighborhood of some of those annoying college students.

Suffolk, which has been slowly migrating away from Beacon Hill and towards downtown, last year sold the Archer Building at 61 Temple St., built in 1920 and the Donahue Building at 33 Temple St., erected in 1966, to JDMD.

Seven of the condos will be in new penthouses to be built atop the current Archer Building's roof, according to a BRA filing from JDMD.

The Proposed Project will embody architecture befitting the Historic Beacon Hill District, the oldest historic district in Massachusetts, and the Proponent will pay special attention to the general design, arrangement, texture, material and color of the architectural features involved and the relationship thereof to the other structures in the neighborhood. The Archer Building, constructed of red brick with granite and cast stone trim and one of the largest expressions of the Classical and Renaissance Revival styles on Beacon Hill, will be restored and will maintain its architectural character. On the other hand, the Proponent will transform the large, institutional modern Donahue Building into a scaled residential structure with a detailed façade and traditional windows in line with historic Beacon Hill architecture.

The filing says the project will offer "family-sized units," although it does not specify the breakdown of the units by number of bedrooms. However, it does say the development will have a total of 145 bedrooms.

The filing also does not specify whether any of the units will be marketed as affordable or whether JDMD will pay into a BRA fund for affordable units elsewhere in the city.

In addition to the residential units, JDMD proposes a 60-space basement garage, in which professional valets will use a car elevator to move cars in and out.

Will Suffolk keep the C.Walsh Theatre?

That's at 55 Temple St, which is between the two buildings mentioned here.

They are putting a parking garage and a pool in. I am guess part of the theater will go towards the pool area. Haven't read the filing, but have been to one of the meetings.

A recent article in the Beacon Hill Times suggested there will be some "affordable" units in the building.

Wish they'd keep the theatre and lose the parking garage

This is Beacon Hill -- people will buy or rent here even if there is no parking. And the theatre could be profitably rented out to local performing arts groups.

The scuttlebutt I've heard-- and it's only that, as I don't have friends in high places, or low ones, if we're talking about the Suffolk Board of Trustees-- is that this sale was committed during the tenure of the previous president to make up for revenue shortfalls, and justified with the opening of the new 20 Somerset building. Rumor is that the wisdom of the sale was questioned too late, and the loss of the Walsh Theater was a specific regret. Suffolk has been shedding real estate like it was old socks lately, but the loss of the Archer and Donohue buildings is particularly painful.

Given that the building was up for grabs, though, I'm surprised that neither a neighborhood group nor the city made a bid for the theater.

Leave Beacon Hill alone! Even if promising an historic looking building, guess what? It won't be an historic building! Marty Walsh, your union builders are going gangbusters but please don't over build Boston. Keep our historic parts as they are.

and I wouldn't call a 1966 building 'historic'. I hate to see the theatre disappear, though.

You can't blame this on Walsh.

Suffolk has been moving out of Beacon Hill for years. They have had help from the neighbors, but they need a lot more space. And building luxury condos is pretty much the only game left in BH (you could try for expensive hotels but that would not get past the BHCA). It is fun to blame all sorts of people, but these units will sell pretty quickly.

And as far as preserving old building in Beacon Hill. There is a big sign outside one of these building saying how many buildings were torn down to build the Suffolk buildings.

And its not like Suffolk has the luxury to hold on to things.
http://www.universalhub.com/taxonomy/term/2080

The objection to hotels...

The objection to hotels or short-term housing is that they bring additional people to a neighborhood (with associated demand on parking, city services, infrastructure) without creating neighbors.... people who become friends and acquaintances; people who become engaged in, and who contribute to, the neighborhood. All the costs of increased population with none of the benefits.

Cause we need more unaffordable housing?

It's the water we swim in

Most of us, the neighbors, would love it if the developer would build apartments that would attract more middle-class families to the neighborhood -- because history shows us that these are the folks that tend to get involved and help make a neighborhood a great place to live.

But the reality most of us recognize is that the owner of the property has the right, subject to applicable zoning and use laws, to get the most return on his dollar. And in this case that means building luxury apartments rather than something more modest.

As a neighbor, I don't love it, and I don't look forward to living in a neighborhood that's got $2,500 per square foot condos and Section 8 rentals and nothing in between. But I have no more right, other than a little bit of negotiating clout to ask for small concessions in return for zoning relief on height, density, etc., to make him build "affordable" units than anyone does to make me sell my house to a deserving middle class family for less than for what I could otherwise sell it to a wealthy empty-nester looking to move into the city.

So, the reasonable folks among us meet with the developer, engage the city's neighborhood input process, understand what we do and don't have in terms of negotiating cards, and try to ask for things that are within reason, without being obstructionist dicks about it.

Perhaps we need more "obstructionist dicks" to stop this from continuing throughout the city.

Yes, we need more housing wherever it fits. The only way to impact the housing vacancy rate is to increase supply.

In other Beacon Hill news

Board approves Beacon Hill lounge where you can hang out with cats; chairman votes 'meow'
Man already wanted for armed robbery tries to shoulder way past cop on Beacon Hill but fails, police say
Man does not live by fancy cold cuts and cheese alone: Boston's sole charcuterie-specific take-out place seeks to add beer and wine
Sometimes the fog is calming and sometimes ...
Mansplainers hold a parade
Revamped Boston Common could include more trees, benches and restrooms, a bigger playground and a soccer field that could also be used for events