The New England Anime Society of Somerville, which puts on the annual Anime Boston show at the Hynes, this week sued two of its former volunteers, who are using the phrase "Boston Anime Fest" to promote their own show at the Hanover Mall, which is somewhere south of Boston.

In addition to trying to stop the organizers from associating themselves with the show that's actually in Boston, in a trademark lawsuit filed in US District Court, New England Anime has filed a request for a temporary restraining order to try to block the Hanover show, schedule for Dec. 8 and 9.

Although the main name of the Hanover show is the Boston SouthCoast Comic Con & Collectibles Extravaganza, its Web site, with a URL of www.bostonanimefest.com, prominently features a Boston Anime Fest logo.

New England Anime says the branding is likely to confuse anime fans into thinking it has something to do with the Hanover show, which it does not. That the new show's organizers, Fantastic Gatherings, Inc. - founded by the two former Anime Boston volunteers - and Interactive Meet and Greet Entertainment, initially linked their social-media accounts to Boston Anime, is also an issue.

The defendants have yet to respond to the suit and restraining-order request. However, in its complaint, New England Anime claims somebody purporting to represent the two basically responded tough noogies because both "Boston" and "Anime" are generic terms that anybody can use.

Because the design of your event can also be considered "generic," and although you may feel that ours may appear to be similar, this does not give you legal ability to impede ours, or other businesses, in an attempt to create an unfair monopoly by the use of the generic terms to restrict competition.

New England Anime is asking a judge to order the Hanover show to knock it off, hand over the URL and pay damages to be determined at trial.

Man, whoever's flying into Manchester-Boston airport, and staying at Boston Bedford Plaza Hotel is going to be really disappointed to find out that the Boston Anime Fest is in the Boston Hanover Mall.

or the Holiday Inn Boston-Bunker Hill

which is in neither Boston nor Charlestown, but actually in East Somerville.

That said, I think Anime Boston has a valid complaint here. All the other con needs to do is change their name to South Shore Anime Fest.

All the other con needs to do is change their name to Somewhere South of Boston Anime Fest.

Fixed that for you.

It's still less silly than all the slobbering over professional sports teams.

Is this naming problem particular to Boston or do other cities have issues with it? I've never really understood it. Why would you call your business Boston . . . if you're located in Attleboro or wherever. Who does that benefit? People in Boston aren't going to go that far afield and people in your town don't know you're actually there.

It's not just Boston. Off the top of my head there's London-Gatwick airport which is almost 2 hours driving from central London. London-Heathrow of course has the same issue in distance (though in their--meaning the major London-area airports--defense they actually have trains that run into the city center). Though of major international airports, calling Narita "Tokyo Narita" gives the impression that it's easily accessible from Tokyo, not an hour and a half by train.

I'm sure there are a ton more examples, and I think most egregious examples will be airports and hotels. This being a function of planes and airports being relatively new, and most international cities being old, thus the real estate in and around cities being much more pricey.

I think the Jets/Giants win

I think the Jets/Giants win that contest. They're not even in the right state.

Well, despite the name, it's

Well, despite the name, it's at least in the NYC metro area (8 miles from midtown). Not a bad trade-off for the *nope* that is getting to Foxboro.

Then, of course, there is the fact that the teams are hot garbage, so I guess it's not the worst trade-off having to sit through that soul-sucking trek to Gillette to at least see a decent team.

most airports are some distance from the center city

Boston Logan is quite unusual in being a short boat or bus ride from downtown. London's don't seem to me especially far away, 27 miles for Gatwick and 19 for Heathrow. Cincinnati's airport is across the Ohio River in Kentucky, and both of DC's airports are in Virginia. Even the Providence airport is 10 miles away in Warwick.

Gatwick is only 24 miles from

Gatwick is only 24 miles from central London, and can be reached by train in 28 minutes.

You are correct that airports are usually fairly far from city centers, but ones in other countries don't tend to be the best example because they are usually still fairly easily accessible.

And yes, the phenomenon of hotels appending the nearest big city to their name definitely happens everywhere. It's largely a crude attempt to push themselves farther up in search results (e.g. a tourist visiting Boston searches for a hotel near Bunker Hill, since that's a well-known historical landmark, and unless they filter by distance, that Holiday Inn is likely to show up near the top. And even if they filter by distance, it's only 1 mile away, so someone unfamiliar with the area might think that would be a reasonable walk through the charming streets of Charlestown. They're basically trying to trick unsuspecting visitors into thinking they're somewhere they're not).

Why say "Boston?" Because tourists don't know the difference

I met an Israeli guy at Reagan airport who was flying to Boston to show his wife the city. They had booked the Charles River Motel (in "Boston", but really it's Brighton) which is near nothing and not even vaguely accessible on the T. It shows up near the top of searches for the cheapest hotels in Boston and IS technically in Boston, so poor saps like my Jewish friend book it, not knowing that they are making a mistake.

Brighton is in Boston

Has been for quite some time now.

is a closed JC Penney store.

Former Penny's, but no dead

Former Penny's, but no dead raccoons; it was converted into an event space deliberately by mall management.

which is somewhere south of Boston.

I hope there is a ball pit 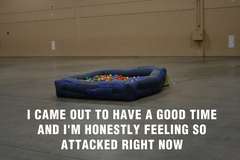 Fair complaint - while die hard fans know anime is a generic term for the genres, Anime Boston is always a very casual friendly event, and many of those casual attendees there to take in the spectacle are a little more vague (case in point, my coworker who told me all about taking her grandkids down to "Boston Animate" over last easter. There's a valid concern that people will confuse the two, which is bad for brand when Hanover is producing a dealers-only style show.

How is Hanover the South Coast? Isn't that a term for the Buzzards Bay shoreline, from Wareham over to Fall River?

Before two-alarm Back Bay fire, firefighters were kept busy with flaming trash, Christmas trees and wreaths
Somebody was running around Back Bay alleys lighting trash on fire, might be to blame for fire in Beacon Street building
Back Bay bald eagle bops along the Charles
Two chefs to team up on Italian seafood place in the Back Bay
Of course 2020 would end with a storrowing
State seeks storrowing-stopping signs