Board approves 974 apartments, condos on Harrison Avenue in the South End 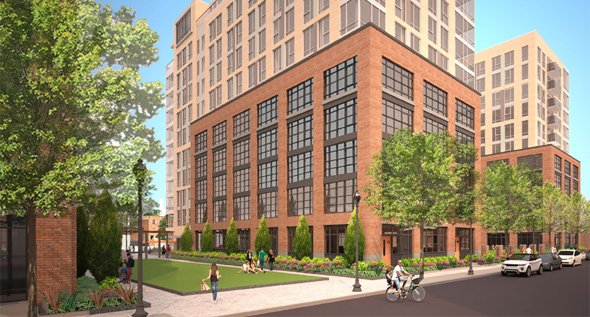 The BPDA board yesterday approved two projects that would mean hundreds of new residential units and retail space on Harrison Avenue.

Winning board approval: A 650-apartment complex stretching from Harrison to Albany between East Canton and East Dedham streets and a 324-unit building with both apartments and condos on Harrison between Traveler and East Berkeley.

Leggatt McCall's Harrison Albany Block would involve construction of two new 11-story buildings and reuse of two buildings left over from when the site was owned by Boston Medical Center. The company had initially proposed 710 units in two buildings, one of which would have risen 19 stories.

The BPDA says the project will mean $3 million in new annual tax revenue for Boston; as a non-profit organization, BMC paid no taxes on the land.

Leggatt McCall says about 65 of the units will be marketed as affordable - some designated specifically for working artists. The company will pay into a BPDA fund to purchase or subsidize another 65 units someplace else. Related Beal's 370-380 Harrison project would include 92 condos and 232 apartments in a 14-story building on the site of the former Quinzani’s Bakery and Ho Kong Bean Sprout.

At least 20% of the units will be marketed as affordable, the company says. "some designated specifically for working artists" Is absolute BS.

It's cute that they still pretend...

...that the artists aren't being gentrified right out of the neighborhood.

People in other professions. Why should artist, shitty ones at that (obviously arent selling any work) be given special treatment?

That war ended decades ago

The South End is for the well off, people in public housing and homeless shelters. At least they still allow large housing projects and homeless facilities, unlike a certain rich, smug town that Boston almost completely surrounds.

I know the city needs housing and this area was pretty barren for a long time. But I wonder what this 1000 units (plus all the other units built there recently) will do for traffic, Silver Line & Orange Line congestion, etc.

Good news in the long run, but I suspect it's gonna be rough for a while.

Time to upgrade the Silver Li

Time to upgrade the Silver Li(n)e to a branch of the green line out of the abandoned Pleasant Street portal branching off at Boylston Street. A quiet minimalist concrete elevated viaduct structure could alleviate any issues with street level traffic causing delays.

The Pleasant Portal feeds in to a grade-separated junction at Boylston, because in 1897, they built thinking of future capacity. This means that you have a lot of capacity, since you can turn cars from the Boylston Street subway at Park on the inner (fence) tracks to allow more capacity for cars from the Pleasant Portal. It's one of few parts of the Boston subway system with capacity (other than most everywhere which could have more capacity with better signal systems).

Once above ground, the trains could operate mostly in their own right-of-way but with mixed traffic as necessary. The Silver Line mostly gets bogged down in downtown traffic; this lets the trains go underground to avoid that (what a concept!). The right-of-way narrows a bit and might require some mixed traffic for a couple blocks just north of Dudley Square. Then, if you go down Warren Street, there's only about 500 yards on a narrow segment (would require mixed-traffic running, but traffic there isn't too bad) before you get to Blue Hill Avenue, which is more than wide enough for a reservation light rail (think the B or C lines, but with center island platforms, ADA accessibility, signal priority, wider stop spacing, etc) all the way to Mattapan (where cars could terminate in the Mattapan yard, or perhaps be extended to Ashmont). Of course, BHA once had streetcars in a reservation, but that was paved over because MOAR CARS!!!!11

You can say that all day that

You can say that all day that doesn't mean there's money or the ability to do it. This is going to make developers a lot of money without a clear ability to support it.

Building housing here means that less housing will be built in the suburbs. At least housing here has the possibility of one day being served by cost-effective public transit. Suburban housing dooms us to decades of unmitigated traffic on the highways. Forcing developments to be smaller doesn't fix our traffic problems, it just moves them around.

The best transportation plan is a good land use plan.

That's not really how things

That's not really how things get built because it's based on the market, and it's not like you can just build whatever you want in less dense locations.

"The market" is what makes it

"The market" is what makes it cheaper to buy up empty land an hour away from the city and build a house than it is to fight with the neighbors in the south end to build a 6+ story apartment building. As long as this continues to be true, the sprawl will continue to grow.

Perfect usage for these areas. Very happy to see approval of the project.

Ah, the proverbial "someplace else"!

"The company will pay into a BPDA fund to purchase or subsidize another 65 units someplace else."

So these are going to be so posh that 65 of the "affordable" units will be dumped someplace else? Harrison Ave is too upscale for them? Yikes, the times really are a'changin'.

not entirely. based on the

not entirely. based on the PDA zoning in that area, they are required to do 20% affordable. They are allowed to do 10% on site and 10% off site. In reality, they pay (in this case, I believe $13 million) into the IDP fund and the City (supposedly) then builds the off site units.
Depending on the land acquisition costs, construction method (ie, not steel frames as is needed here), etc, $13 million can go a lot further than 65 units someplace else.
Of course this all depends on the City actually taking the next steps and not just sitting on the money.

It's purely a numbers game,

It's purely a numbers game, which is why projects in this neighborhood are rarely built with affordable housing included on-site. The amount that must be paid into the fund is a fixed amount based on the number of square feet being built, so if the land value and zoning are high enough to justify steel frame construction, it will almost always be cheaper for the developer to pay into the fund than it would have been for them to build the unit themselves. On the plus side, you can build 3 wood-frame units for the price of 2 steel-frame units, but it does tend to mean that neighborhoods with high land values are unlikely to get any affordable housing at all. Right now, there are only a few neighborhoods like that, and most of us middle class folks can't afford to live there either, but if the IDP amount isn't adjusted upwards, eventually no developers in Boston will be interested in building on-site.

Can you smoke weed in them?

Did I miss something?

What about parking? And please no BS about being near public transportation.

And how is that BS in a city

And how is that BS in a city where the majority of people take the train to work and 20% of households do not even own a car?

Is exactly why the City should require that a development should be required to supply 80% of the total amount of units for parking spots. Thanks for supporting the argument for more parking spaces in the city.

That's 80% across the entire

That's 80% across the entire city, including all of West Roxbury and Hyde Park. For transit-accessible homes and homes with fewer parking spaces, the number is much lower.

32 people in my office

Everyone drives to work.

You sure about that?

40 people in my office. Only a handful drive. Is parking free where you work?

South End gets brick facades and South Boston gets Hardy Plank. The architects for South Boston developments who design buildings that look like it was designed by someone who just graduated from trade school should take a ride westbound over the Jimmy Kelly Bridge.

Units in the South End can be sold for more, meaning that the developers can spend more to get the same (or similar) return of investment that they would in Southie.

But hey, no one's preventing you from using your millions to build South End quality housing in Southie, Dorchester, Hyde Park, or anywhere else.

South End property costs more because they truly are luxury. Put hardy plank n a South End buildings and you will not get as nearly as much money for them. The difference between hardy prank and masonry is not millions.

It's not a really big enough

It's not a really big enough cost difference compared to everything else.

Boston Medical Center bought the two buildings at 575 Albany Street - the one on the street built in the 1880s or so and the one behind built in the 1970s - from PerkinElmer several years ago. Before that it was the long time site of the old New England Nuclear, where radioactive compounds for research had been manufactured since 1957. The old building suffered a fire a decade ago which led to it needing to be gutted. Carefully. A company which specializes in decontaminating radioactive sites was brought in to do the work. The labs in that building contained more radioactive material than any place in the US which is not a nuclear power plant, quietly in the middle of the South End. Now that operation is located next door, in the complex which is in between Plympton and East Dedham. The amount of radioactivity which is allowed to go into the air and down the drain is quite low and heroic measures have to be taken to use that much radioactive material safely in an urban plant.

Boston says shortage of lifeguards means it won't be opening four neighborhood pools this summer; fifth to stay closed as unsafe
Citizen complaint of the day: That's no Dick Van Dyke singing 'Chim Chim Cher-ee'
If a tree falls in the South End, you better believe it makes a sound
Urban geese learn to adapt
BPD shutting roads across city in bid to crack down on weekend ATVers, dirt bikers, partiers
Driver mugged behind the wheel after two guys jump into his car outside Boston Medical Center, DA says