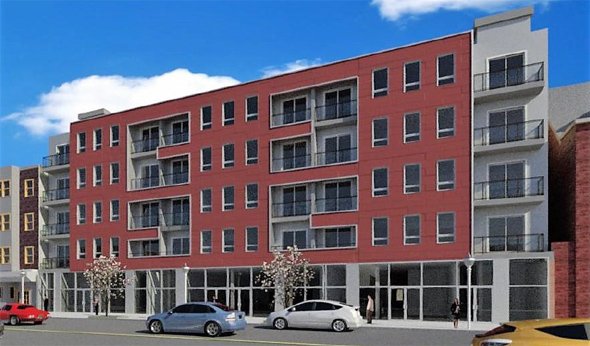 Developer Michael Moore last week filed his detailed plans for replacing the Family Dollar, a pizza place and three other shops on West Broadway with a 44-unit apartment building and a 50-car garage that has room for stores on the first floor.

In plans filed with the BPDA, Moore said all of the units would have either one or two bedrooms.

He filed the plans just a few days after the zoning board approved his seven-story replacement for the Gulf station at West Broadway and A Street.

Moore's building would come with rooftop decks and a dog-walking area. Units facing Broadway would have balconies for "the tenants to watch and be part of the activity on West Broadway."

Six of the units would be marketed as affordable.

The retail space "will offer varied commercial opportunities bringing businesses back to the neighborhood," Moore's application states. It does not say whether the businesses being brought back will include the ones being displaced by the new building.

Moore hopes to begin construction in early 2019, with completion in late 2020.

The BPDA has scheduled a public meeting on the proposal for 6:30 p.m. on Dec. 11 at the Condon Community Center, 200 D Street in South Boston.

The view from the square: MORE CHEAP SURFACES AND QUIRKY ASYMMETRY! HOW NEW! HOW REFRESHING! HOW... HOW... how will we ever explain this to future generations?

I believe the Boston area supports several schools of architectural design. Perhaps it is time for a career change?

I'm not seeing anything

I'm not seeing anything particularly asymetrical.

Balcony units in the center

The two story C-shaped balcony unit blocks do not appear to be of uniform height (the lowest windows look cut off), and the C shapes are reversed.

They mirror each other though, to the left and right, i.e., it's symmetrical.

over the absolute garbage that it is replacing.

That proposal is incredibly oooooogly. It does nothing to improve the neighborhood.

Looks like they bought the rendering software right from Family Dollar.

Which is not by any means a cheap piece of software, aside from piracy.

However, they did decide to use the out of the box materials and generic rendering style, which I agree look like garbage.

Fifty parking? Forty-nine too many

Someone doesn't live in Southie

But hey, go to the community meeting about this project and feel free to tell them they only need one parking spot for the whole thing.

Here's why they don't need parking

Everyone can just double park on Broadway like they always do. Problem solved.

You can’t just do that overnight on Broadway

You can only double park for two hours, max.

So, one handicap-only Zipcar oughta do it?

Its a shame that Ken and

Its a shame that Ken and Barbara Dollar and their children Kayden and Brayydyn Dollar are losing their Family Dollar home for this new construction.

Moore said all of the units would have either one or two bedrooms.

Shortage of 1 and 2s in Boston

There is plenty of 3+ bedroom housing in Boston. It's just that a huge amount of it is being taken up by roommates instead of families. Most of my peers are in that situation. They desperately want to quit being roommates, but the available inventory is so low that they have little choice but to live with other people, often well into their 40s.

The more one and 2 bedroom units we build, the better. Eventually it will ease pressure on the existing stock of true family housing.

What percentage of the 3+ bedroom houses are complaint with the lead law for children under age 6? I'm guessing not many.

Most families also can't spend three months living in limbo waiting for a landlord to delead a unit for them, as it states in the law.

Either demand laws that all units be inspected and deleaded in order to get an occupancy certificate (it isn't good for adults either) or buy your own home and have the deleading done.

no apartment rentals of any kind.
no 1 to 2 bedroom condos.

that will improve this neighborhood drastically.

the good news is that the bros are being priced out already...building smaller units may slow that down.

Or developers can do what

Or developers can do what they want with their land and people can choose to live where they want instead of enacting dumb laws to discriminate against certain type of people. People aren't more worthy than others just because they have crapped out a couple kids. And who can afford a brand new 2500 square foot condo?!? A tiny percentage of people.

You really do hate kids don't

You really do hate kids don't you? Man your parents must have really done a number on you.

Entitled parents expecting the world to worship them are.

Three 1 BR apartments will always cost more, combined, than a single 3 BR apartment. There will always be pressure for young people to have roommates in order to afford housing. That won't go away anytime soon, if ever. Sure, the pressure will be reduced, but it won't be eliminated.

We need to build new for all family units -- singles, pairs, families, multi-generational, disabled, senior, etc. I'm not arguing that every building must cater to every group, but it's important that every neighborhood be accessible to all family types, and that means that our new buildings must contain this mix. The fact is, most singles and pairs are the most resilient -- they're the least likely to need an elevator, to suffer from problems with lead, to not need handicap features in bathrooms, and in general to be flexible enough to make things work. New housing isn't just about stainless steel to those other groups -- it's often about accessibility and safety.

(to reiterate, I'm not arguing for a massive top-down program; merely arguing that existing housing stock is often inadequate for households and that new housing solves their challenges)

"There is plenty of 3+ bedroom housing in Boston"

Take a drive through

Take a drive through literally any neighborhood outside of downtown.

See all those hundreds and hundreds of triple-deckers? Lining nearly every street? Along with some 2-floors and single families? Nearly all of them are 3+ bedrooms.

A lot of them are not occupied by families, they're occupied by young people with roommates. many of whom would enjoy having their own place, a 1-bedroom or studio. But they can't find that type of housing, because people fight housing that isn't entirely 3+ bedroom.

It definitely seems like they can build bigger/higher and fit in more units.

As stated in the document,

As stated in the document, maximum height per the code for this project would be 40ft. The proposed structure is 55ft, so it would require a variance.

More units would require more parking. They are proposing the use of CityLift Puzzles to meet the requirements: https://vimeo.com/147893158 . It seems like the parking supply is pretty much maxed-out for the space.

You could fit a lot of units in the space to be used for the 50-car garage.

I didn't think exterior egress stairs as depicted were allowed? Unless they're not part of the egress plan and are for convenience only?

I am sure that would be the back of the unit with the front door opening onto an interior hall.

I got it - and I still thought new ones (exterior egress = fire escape) had become disallowed in the current code.

Will it have a new Family Dollar

as one of the retail tenants?

Dollar Tree is Family Dollar. Given that DT is the parent company (they bought them two years ago), you're more likely to see stores become DT than FD.

can we call it the pacman building? the little windows are the ghosts

If he were alive, this is what he would be building.