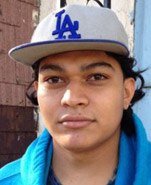 Rogelio Alvarado, 23, was shipped back to Boston for arraignment in Suffolk Superior Court today on charges of assault with intent to murder, unlawful possession of a firearm, carrying a loaded firearm, and two counts of assault and battery by discharge of a firearm for the attack, which began as an argument with a member of the 18th Street Gang on a Blue Line train pulling into Maverick, the Suffolk County District Attorney's office reports. Both shooting victims survived.

A judge ordered Alvarado held in lieu of $500,000 bail - prosecutors had asked for bail of $1 million.

He was stopped by police in Huntington, New York, on the night of July 12 as he drove a Toyota Solara the wrong way down a roadway, forcing other drivers off the shoulder of the road, prosecutors said. Following his arrest for negligent operation of a motor vehicle, officers learned that he was wanted on a warrant out of Suffolk Superior Court.

Huntington is not far from the village of Brentwood, where President Trump traveled two weeks later to condemn MS-13, a gang responsible for murders across the country - including several in East Boston.

Alvarado was not among the 61 MS-13 members indicted in federal court last year on various charges related to the murders, drug dealing and gun running. In an affidavit related to that case, an FBI agent involved in the investigation said it is common for MS-13 members facing charges in one area to run to another, where members will provide them housing and support.

If the blue line is home turf for MS-13 and the bloods have the red line
which gang controls the orange and green line?

Do the bloods have the red

Do the bloods have the red line??

The T has a problem with falling pieces of metal
The reason for all those Eastie frowns? There's a dead train at Suffolk Downs
Restaurant on Border Street in East Boston wins approval for permanent patio - but without music
Two guys were tooling around East Boston with two guns loaded with a total of 28 rounds; nabbed because their car's window tinting was too dark, police say
This storm was not messing around
On Boston's smallest subway line, the maintenance delays are a bit shorter than a month