The Supreme Judicial Court today ordered a new trial for Anthony Villalobos, whom a jury convicted of involuntary manslaughter and assault and battery for his part in a fatal 2009 beating outside a now closed club on Stanhope Street, because the judge in his trial never conducted an investigation into the impact of two jurors falling asleep.

Villalobos, a Revere resident, was one of a number of men dressed in black tuxedos and red vests who went to Club 33 on Aug. 20, 2009 after attending a funeral in Lynn. At closing, officials said, one of them got into an argument with Jose Alicea of Hyde Park; 13 of the men were eventually tried and convicted for their roles in punching and kicking Alicea to death.

At issue was what the judge in his trial didn't do after an assistant Suffolk County District Attorney notified him that "some jurors fell asleep during the trial" - interview the jurors in question to determine whether they had in fact been caught napping and then whether their snoozing might have affected their deliberations. One juror, the prosecutor reported, had fallen asleep "several times" during testimony; the next day, another juror "was sound asleep" during a witness's cross examination.

The judge, the justices continued, appeared to be under the mistaken notion he could not do anything unless he personally witnessed the jurors nodding off - which they did not when he watched them carefully after the assistant DA's report.

Citing another case in which they had ruled snoozing jurors were enough of a reason to call for a new trial, the justices continued:

The Commonwealth argues that the sleeping jurors missed minimal and relatively inconsequential portions of the testimony. Based on only the record before us, however, we cannot be sure that this is true. The purpose of a voir dire is
to investigate the report that one or more jurors were sleeping and to determine what, if anything, the sleeping jurors missed.
Because the judge did not conduct a voir dire, we do not have these essential findings.

In the circumstances of this case, the judge's response to the prosecutor's reports leaves us with "serious doubt that the
defendant received the fair trial to which he is constitutionally entitled."

Neighborhoods:
Back Bay
Topics:
Crime
Free tagging:
SJC
Ad:
Like the job UHub is doing? Consider a contribution. Thanks!

and I see they have a partner in crime!

Testimony must have been bad

Testimony must have been bad for two jurors to fall asleep.

I bet there are legal records from the 1700's that mention napping jurors. Seems like the type of thing that would be understood to not disqualify a trial.

Villalobos's lawyer also argued the testimony and evidence was bad, and not just because it was droning, but the court ruled that, nope, it was fine and if it weren't for the sleeping jurors, the court would have upheld the verdict (in fact, the SJC decision was on an appeal from a Massachusetts Appeals Court ruling that upheld the verdict).

Why didn't somebody wake them up?

I have been on juries enough times (I have been called like clockwork every three years for almost thirty years, they claim it is purely coincidental) to know that someone's eye is always on the jury, be it the lawyers or the marshals or somebody. Even other jurors. I really don't like being on juries myself, but this really bugs me. This "people think it's OK to just sleep in any public place" thing that was recently under discussion here in regard to the Boston Public Library, taken to an extreme.

Unless you have a medical

Unless you have a medical issue, how do you fall asleep during a murder trial?!

Maybe they had medical issues

Maybe they had medical issues! (Although two people on the same jury sounds odd for *any* reason.)

Even in a big trial, a lot of the testimony can become tedious. Think examples like:

These are just 2 examples of topics that can drag on for hours. I've been able to stay awake myself. And I'm surprised nobody in court woke up the jurors in this case, but it's very conceivable to me that people nod off.

Agreed there are long, tedious, excruciatingly dry passages to trials. But if I can stay awake for them during the numerous times I have dragged my butt to jury duty early in the morning when I would rather be anywhere else, then so could these slobs. And I don't want to hear "medical reasons" for one second, either. Two on one jury? Even one on a jury? Not likely. It was just plain uncouth behavior.

Ever hear of low blood sugar and/or low blood pressure

Well, depending on the time of day and my activity level at the time, I can easily suffer from either or both - even if I try to forestall it by eating or drinking extra at meals. The basic side effect of either condition is to make people drowsy. And, last I checked, the jury benches in courtrooms don't have either drink dispensers or snack machines. Nor do court officers allow people to bring their own food or beverages into the courtroom.

Be reminded that most common medical conditions do NOT automatically disqualify somebody from jury duty. And most people I know who are susceptible to such conditions (including myself) control them well enough and are responsible enough that they would not try to use them to "get out" of fulfilling their civic duty. 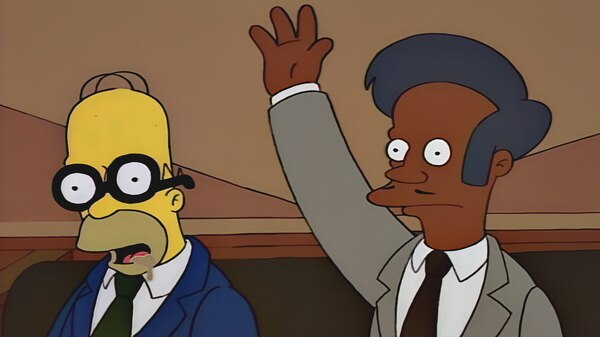 Perhaps if Apu had been on that jury, there would be no need for their verdict to be overturned.

I was on a civil case a few

I was on a civil case a few years' back. One of the jurors next to me nodded off. Had to nudge him to wake him up. Was afraid of a mistrail, and we'd have to do the whole thing over again!!!

A friend of mine was on the jury for a pretty big murder trial. Things were so gruesome (they would faint at the sight of blood) it made it do they had trouble sleeping each night. Add to that this person only ever drank full strength, high-test coffee during the day. Couple those two and this friend occasionally had trouble. The judge and court officers kept quite an eye on the jurors for this case, including when testimony got to be too gross and the entire jury needed 5 minutes.

Trademark lawsuit over name of new Italian restaurant on Newbury Street gets ugly
Man tries to jump over Public Garden fence, doesn't quite make it, impales himself
Our rainbow drought ended this evening
Storrowing is easy; try getting your car up on a guard rail
Man sought for beating somebody during Copley Square Celtics watch party last Friday
Frisco columnist finds Boston far more world classy than his town, because we hide our homeless from visitors