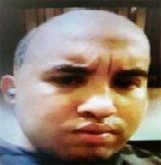 Bryan "Chucky" Galicia Barillas, 20, faces 22 years in federal prison after pleading guilty today to providing the gun another MS-13 member with bad aim used to kill an innocent woman in Chelsea in 2014 and to his role in three failed murder attempts, the US Attorney's office in Boston reports.

Galicia, a Guatemalan national, faces deportation on his release from prison, the US Attorney's office adds.

Katerin Gomez, 35, died on Oct. 18, 2014, when Galicia's fellow MS-13 member tried to shoot at rivals on a Chelsea Street, but missed. Gomez, whose three children watched her die, had nothing to do with the gang feud; she was looking out her apartment window at the time. Her alleged murderer, Hector "Cuervo" Ramires, to whom Galicia gave the gun, is scheduled to go on trial Nov. 6.

Galicia was a member of MS-13's Enfermos Criminales Salvatrucha "clique" in Chelsea.

According to the US Attorney's office:

Galicia Barillas also accepted responsibility for his role in the following: an April 2015 conspiracy to kill a MS-13 member that the gang believed was cooperating with law enforcement authorities; a May 26, 2015 stabbing and attempted murder of a rival gang member in Chelsea in which the victim survived the attack; and a September 8, 2014 stabbing and attempted murder of an individual in Chelsea.

Any thoughts on why it seems so many of these cases are pleading guilty? Is the evidence on all of the that indisputable or is it a gang "honor" thing to claim their brazenness? Or is it that they will continue the same business:lifestyle in prison or out?

I would say the answer would

I would say the answer would be yes. Look at it this way. You know how when there is an act of terrorism, right away the terrorists start to proudly declare to the world that they take full responsibility for such act? Same mentality.

The lawyers see the evidence and explain to their clients that avoiding a trial could mean reduced jail time.

Of course, some might say the opposite is true, as there are lawyers who convince defendants who are in fact not guilty of charged crimes to plea guilty for the same reason.

Save the government's time and they will usually give you a lighter sentence. If you force their hand and go to trial, they usually ask for and receive the maximum possible sentence.

Not that it's relevant in this case, but sometime even innocent people plea guilty because anything can happen at trial.
Why Innocent People Plead Guilty

Take the blame or have you family physically harmed

These guys aren't going to go out of their way to finger other members. That is the sincerest form of snitching.

If 20 years old now, when did he sneak into the US? Is he an Obama "Dreamer"?

"Galicia Barillas will also be subject to deportation upon the completion of his sentence."

Oh, you caught me

Yes, I left out that info (but have now added it in). Of course, it had absolutely nothing to do with me posting at 11 p.m. on a Friday about members of a gang whose immigration status I have mentioned in past stories (I wouldn't dare suggest you click on the MS-13 link at the bottom of the story to check) and me being tired at the end of the week and just making a mistake and everything to do with me being biased. Ayup.

Hate to break it to you

But he, in theory, could be a lawful immigrant. I mean, people do legally immigrate to the US every day, even Guatemalans. And yes, legal immigrants convicted of serious felonies are subject to deportation upon completion of their sentences.

I have no problem with people calling out Adam’s biases, but perhaps you have some biases of his own, no?

they're also a major prison gang. He will be useful to them in prison.

You will also notice that, with some exceptions, most of these guys who end up in prison are young, very young. They are expendable.

In other Chelsea news

How Everett and Chelsea got screwed by the stimulus package
MS-13 member admits to helping kill a teen in a Lynn park
Jazz musician Chick Corea, Chelsea native, dies
The Burbs Are Hot in Boston - Here Are 4 of the Best Suburbs to Live
The Clauses visit Chelsea
Suffolk DA moves to vacate 108 drug cases that involved evidence that might have been mishandled by disgraced state chemist