The New Balance effect: Two three-unit homes near massive development to be replaced with 46 condos 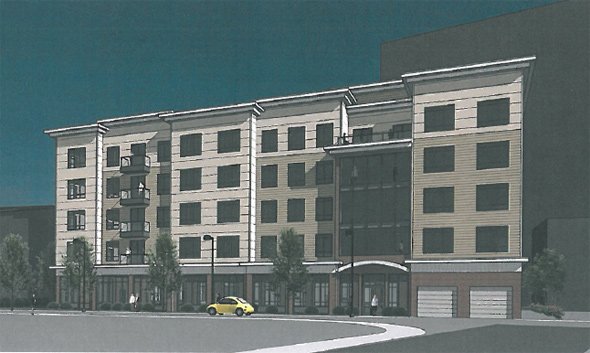 Two developers say a five-story, 46-unit condo building is far better for Brighton than the two "underutilized" three-family buildings they want to tear down on Hichborn Street, behind New Balance's new development along Guest Street.

In fact, in a filing with the BPDA, developers Joseph DiGangi and Matthew Pennino say replacing those two buildings alone are the sort of "community benefit" developers always say they're offering in exchange for exceeding a given parcel's existing zoning.

They say the building would fit in well with the existing neighborhood, including the New Balance development and a 20-unit, five-story building the BPDA has approved at 26 Hichborn St.

The building would have 50 parking spaces for residents.

Earlier:
Old-school Brighton bar to be torn down for condos.

Now halve the amount of parking

Live nearby. 90% of residents of driving age own a car. 95% of the cars are gone during the day for work or school.

Don't complain about traffic unless you are willing to fix that.

Seriously - 90? I'd LOVE to see where you are getting that data from ... unless it involves toilet paper. Boston as a whole is at less than 50% of households having car ownership.

Good question - it appears to depend on how you cherry-pick...

We can look it up for

There are confidence intervals of ~2% on those numbers, but that still wouldn't get them to your 90% and 95%.

Live near the bus not the trolley

i see with my eyes

humans are animals and will overpopulate the streets with cars until total gridlock causes extinction of the automobile. Nothing you can say will stop this. Ever. People love their cars.

I ride a bicycle so I live, laugh, love.

What cars a good for

If only there was a wheeled form of transportation that allowed you to do all of those things. Man, someone should try to invent something like that.

I don't own a car (work pays

I don't own a car (work pays for the T pass) so I don't have a car in this race, but biking in boston is legitimately dangerous and pretending everybody can or wants to risk getting killed horrifically just to make it to work is disingenuous.

"Debaters invoke a straw man when they put forth an argument—usually something extreme or easy to argue against—that they know their opponent doesn't support. You put forth a straw man because you know it will be easy for you to knock down or discredit. It's a way of misrepresenting your opponent's position"
http://www.quickanddirtytips.com/education/grammar/what-is-a-straw-man-a...

The only danger to biking is

The only danger to biking is maniac car drivers. That is why we need less drivers on the road. One way to do that is to stop forcing developers to put in parking spaces, which I may add, make homes more expensive by tens of thousands of dollars.

Some people have a family...

Some people have a family... babies cannot ride bikes.

So to be clear I think I have

So to be clear I think I have some level of an ability to speak on this, as a father and a part time cyclist.

You are right that Trailers and Seats are options. IF your children are over a year old. and the Weather isn't terrible, and your in good enough shape to haul the extra weight up and down hills you need to travel.

When my oldest was the only child we would ride to school on my bike with him a rear seat. We also got backed into by a garbage truck.

Now, with two of them too young to bike on there own and in schools in 100% opposite directions (literally at opposite ends of Washington st in Brighton) it harder. Hauling 60lb of children and 30lb of trailer up the hill is not something I am fan of in the morning.

Also, given my negative garbage truck interactions, I know that would have ended much worse if I had had a trailer rather than a bike seat.

Also, sure I can bike to the grocery store, but getting home a family worth of groceries and kids is not a simple or even really achievable proposition. I know these properties are very close to Stop and Shop and the commuter rail, but the same time, the neighborhood in general seems to have 1 car to a family (thats what the stats basically show) which matches the parking spaces for this property. It is being built match existing community norms. (Not that I am sure I support it, I am really mixed on that block, its ... really strang)

They're also good for

Cars are also good for:

Going out of the city, if one needs to.

Safer if you're going to be out very late at night, no matter where one goes.

Again, cars are not "safer"

Again, cars are not "safer" than anything other than picking up heroin as a hobby. Getting in a car is by far the most dangerous thing you can do on a daily basis. The stats back this up in so many ways.

Did you really just use

Did you really just use "safety" as a benefit to cars!!!! LOL. Tell that to the 36,000 people who died last year in car crashes in this country alone. That type of ignorance is what leads to dumb ideas like planning cities around cars, which leads to more traffic, pollution and death.

are cars Good or Bad?

Dumb question! There are good things AND bad things about cars, and those things will vary depending on your particular housing and working situation.

The actual government policy in question is mandatory parking minimums. Off-street parking in a dense area is a luxury good just like any other, and the city doesn't mandate granite countertops or walk-in closets. I don't particularly care how many spots a developer decides to put in there, as long as the city isn't demanding some minimum number. If there "aren't enough" spots then people who want/need cars will live somewhere else!

I wonder if the residents of the two buildings being sold and torn down think that they are "underutilizing" their homes?

If the residents are renting (and given the lack of Residential Exemption it seems that they are), how should their opinions impact what the owner does with the property?

the owners have changed their plans and are going to locate an open-air, pig rendering plant there -- with an auxiliary use strip club (tentative name "Sows & Wows"). Hope you don't mind because, after all, how should your opinion impact what the owner does with the property?

Underutilized Does Not Mean

Not every development can be on a vacant lot. Most had someone using them before hand. Doesn't mean it isn't in the best interest of everyone to try to do more.

Time to move the donuts across Cleveland Circle
No Freudian slip: Board approves new apartment building called the Sigmund off Soldiers Field Road in Brighton
New sign, who dis?
Oak Square gets some time in the roaster pan after power goes out
Some passengers on a Framingham-bound train forced a door open to escape after nearly two hours stuck with no AC in the sun in Brighton
Brighton food-truck operator charged with pandemic-relief fraud; used federal grants aimed at keeping his business afloat to play the stock market, feds say