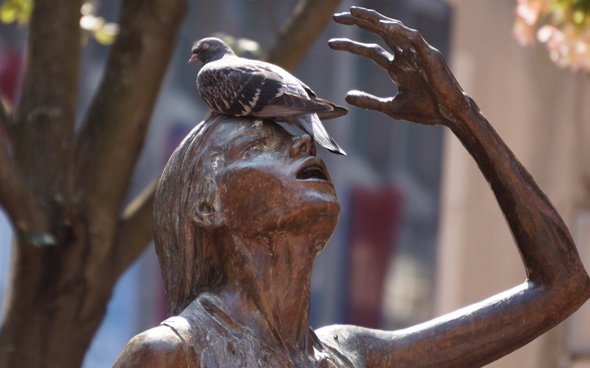 One of the statues in the Irish Famine Memorial couldn't get this pigeon off her head at lunchtime today.

Somewhere the TLF is engaging

Somewhere the TLF is engaging in some totes jealous brooding.

Although the victims of the Irish Famine most certainly have my sympathy, that memorial is hideous. The area looked better before the memorial was erected in 1998. It adds nothing to the area.

Robert E. Lee openly rebelled against his government in order to keep people in bondage. This was very bad, but what you have said doesn't sit too well with me either.

The 1840's famine in Ireland wasn't the first but it was the first one in Ireland where the government, that being the British, you know the Queen, crumpets, Judi Dench acting gigs etc, tried to starve the people out with deliberate government action and inaction. The potato blight also affected Belgium, the Netherlands, Germany, Denmark, England, and France, but there was no mass starvation there since it only affected 10% of the food supply, not 30%+ in Ireland. The governments in those countries intervened and fed people.

The British government tried to use "free market" forces to solve the problem all the while forcing food out of Ireland to pay the England based landlords but also kept protectionist legislation in place that benefitted their farmers and landlords. Ireland was a net exporter of food during the famine in order to pay the bill, yet 1 in 8 died and 2 in 8 left. That's a 37.5% kill ratio. Even the US Government admits that if you kill just 10% of the local population in a war that that group is scarred for generations. By the way, the population of the island as a whole just recovered to pre-famine levels in the past 15 years.

In essence, there was an attempted genocide by the English on the Irish. Do you understand now why we don't like them too much despite the Premier League and Paul Weller?

Forgive me if I find offense at your comment. I hate this statue by the way, but not the legacy of what a callous government did to my ancestors and in a strong way to this country. It sticks with you.

Britain could no longer feed its own population. They also had oppressive conditions in the mills that led to concentrations of already angry people in their burgeoning cities. The powderkeg of exploitation needed only the match of hunger to explode.

So they starved the food producers to prevent uprisings in their mills. About that simple.

I'm not sure if it was quite

I'm not sure if it was quite that purposeful, but at the very least it was brutal indifference, insular contempt, and.. imperial.

For as many Bostonians (and

For as many Bostonians (and Americans) like to claim affiliation with the Irish and perform the whole Irish heritage thing, the level of ignorance regarding the famine is UNREAL. The fact that food continued to flow out of Ireland into England wasn't something I learned until my thirties and is still shocking, morally.

I agree with most of your

I agree with most of your post, John, but...

By the way, the population of the island as a whole just recovered to pre-famine levels in the past 15 years.

Pre-famine population was somewhere around 8.3 million.

Current population of the Republic is around 4.8 million and Northern Ireland is 1.8 million.

Most of my relatives keep emigrating. It skews the numbers a bit.

By the way, it is just the most hypocritical thing to watch the Irish complain about immigrants coming into Dublin and the other cities. One of the most pot calling the kettle black things I have ever seen.

It's hard to make a case re:hypocrisy when you are comparing two populations, distinct in both time and habitation - ie, those then who left, versus those now who stayed.

(not to say that I support the sort of anti-immigrant attitude you are describing. Just pointing out that it's not really a case of hypocrisy).

And the famine happened in Ireland

Not Boston. So having this prominent statue in a very public place in Boston is just as inappropriate as a statue of Robert E. Lee would be.

I'm also pretty sure a hare and a tortoise never actually did the full 26.2 from Hopkinton to the Back Bay either.

However, Boston was the recipient of people from three big genocide attempts; Ireland, the Jews, and the Armenians. I've been to Budapest, the uprising in 1956 happened in and around the old Jewish section of the city, not here at Liberty Square. This city was made a lot better from the refugees from those lunatic attempts at trying to wipe out their cultures.

What do you mean

by "here" ? John Harvard died in Charlestown, and is buried there.

He would have got into a fistfight with Leif Erikson over who got here first.

The diaspora from Ireland was an enormous force in Boston's development as a city, and the political life and history of the Commonwealth.

..and a number of people who

..and a number of people who were directly affected by it ended up here, which is a contributing factor to the makeup of the city and state (sorry, "commonwealth") in generations since. Why wouldn't there be a monument/memorial?

On aesthetic grounds. The famine statues are pathetic and sentimental. Maybe that's one reason for so much resistance to tearing down the old ones. We could however make a plaque with your aggrieved comment and add it to the memorial.

You just want your own statue

I'm sorry, but that's her normal condition. There's a pigeon on her face almost every time I walk by that statue!

But I've been unlucky - roughly twice a week now for months I've walked past it and no pigeon, and finally today ...

I try not to laugh

When I walk through there, I do try not to laugh. The poor woman always has pigeon face!

I do think that the pigeon butt merely adds to the indignity of starvation, homelessness, and lack of clothing.

... for what Elmer has to say about this.

Dick Francis captured one of

Dick Francis captured one of my favorite jokes ever in a book several years before he died. All my books are boxed up RN, so I can't do it full justice, but it went roughly like this:

For years and years, two statues locked in a tender embrace stood watch over a park memorial to lost love; an angel eventually visited, made them human, and gave them ten minutes to do whatever they wanted. The pair immediately fled into the nearby bushes.

For five minutes, there was a great cacophony of shrieking and grunting before the couple emerged—flushed, sweaty, and disheveled, but looking pleased with themselves.

The angel, surprised, said, "Is that all? You still have five minutes."

The couple looked at each other, and one said, "Shall we go again?"

The second replied, "Yes, but this time, you hold down the effing pigeon, and I'll shit on him."

Thanks - I needed that!

There's a metaphor for

There's a metaphor for comment boxes in there somewhere.