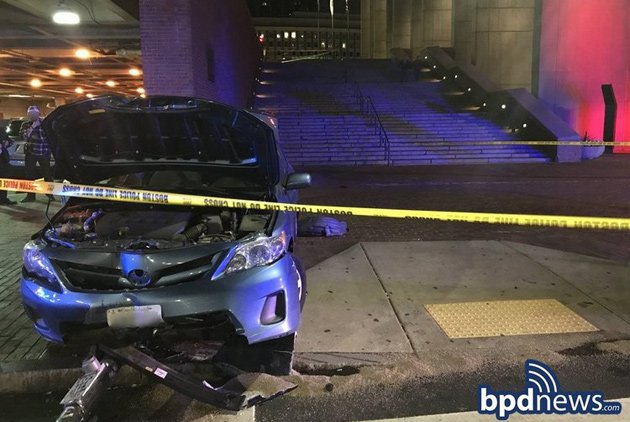 A Tiverton, RI man faces a variety of charges after allegedly driving from the Old State House onto City Hall Plaza and then down the stairs towards Faneuil Hall last night, police say, adding he somehow managed to avoid hitting anybody on the steps.

Police say Nicholas Hoetzel, 26, drove down the walkway from Court Street to City Hall Plaza and towards City Hall around 10:35 p.m.

As the vehicle approached the main building, it turned right and down a large, three portion staircase before striking a large cast iron pole holding the crosswalk signal on Congress Street. Although numerous people were walking on the stairs and in the area at the time of the incident, miraculously, none were struck or injured in any way.

After the crash, which left his Corolla with heavy front-end damage, police say, Hoetzel ran away. Police say officers found him not long after, outside 28 State St, unconscious and "suffering from numerous self-inflicted, non-life-threatening injuries."

Police say officers found "a large, opened bottle of alcohol" in the car's front seat and a gun on the floor.

They add they suspect "mental health issues," not terrorism. Once released from the local hospital where he is now being treated, police say, Hoetzel will be arraigned on charges that include unlawful possession of a firearm, negligent operation and OUI.

That route appears on maps as Cornhill St.

In fact, the only way you can locate businesses at One City Hall Plaza through Yelp or Google Maps is if you put "60 Cornhill". Otherwise, it sends you to the alley behind the old city hall.

That's because those businesses are in fact 38-66 Cornhill Street. One City Hall Plaza is a vanity address. Not real. The owners made it up.

not a train wreck

My first thought was that this was a fitting milestone to mark late-term Walsh administration, not quite a train wreck but definitely off-track.

Mismanagment is how Marty Walsh got named in the sexual harass..

Not quite a train wreck? Wake up and smell the coffee.

Marty is in fact named in an MCAD sexual harassment complaint. He has two employees under Federal indictment for extortion #corruption. pic.twitter.com/tzsdbuFGP3

To be honest, I think that

To be honest, I think that Adam was trying to make an analogy to the Charlottesville Business. (Shrug.)

What kind of chase movie is that? No cliches?

By Jove, you're right

So I swapped in a photo of the actual car.

That plaza has crowds of pedestrians on a daily basis, plus multiple high-profile government buildings.

How did some mentally ill person just drive in there.

How else will city employees and contractors use the plaza as their personal parking lot all day?

Well, supposed to be for food trucks to drive in there.

Does he get bonus points for not taking out any stair railings?

I would think that barricades

I would think that barricades that go up and down out of the sidewalk would be a good thing for that area.

But, yes, there are a lot of people who drive through there including city employees, food trucks, blood drive vans, and news vehicles

I would think that barricades

Why there in particular and not on every single sidewalk in crowded parts of the city, all of which have large concentrations of pedestrians in places accessible to vehicles? I don't think this is a problem that admits an easy or obvious solution

That particular location is the extension of an existing thoroughfare.

One could get up a huge head of steam on Washington in the off hours, run the light at Court, and enter that very highly trafficked government facility area at a high rate of speed. It would be much more difficult to do that on the other side of City Hall, off Cambridge St.

I tried to check what they did with the Fed buildings on the other side of the plaza, but Google shows it all under construction still. Satellite shows a lot more obstacles.

Methinks it's time to add

Methinks it's time to add some bollards at the top of those stairs to keep this sort of thing from ever happening again.

Methinks you are right

You could add various types of theaters and other places where the public gathers.

It's time to consider the magnitude of the risk, the cost of installing bollards, and decide whether that is really where you would spend the next $150k or so on public safety in Boston.

In front of the Colonial Theater (when it reopens), Wang Center and the movie theater complex on Tremont Street. The Opera House already has a big gate, and I think the Landmark Center is set up so that a vehicle couldn't get into the building.

Was I the only one who immediately thought of this?
https://www.youtube.com/watch?v=2ETruidd5lQ

I initially embedded that clip at the top of the story, but swapped in the actual photo.

Poor guy was just in a rush

Poor guy was just in a rush to pay his tax bill.

Not his first time...

12/20/13
"At 11:15 p.m., Nicholas Hoetzel, 22, of 7/1 Bucks Way, Tiverton was charged with driving under the influence of alcohol, failure to stop after an accident, refusal to submit to a breathalyzer test, having alcohol in his car, and passing another car where passing is prohibited."

and passing another car where

and passing another car where passing is prohibited."

OUI, no biggie. Failure to stop or submit to a breath test - meh. But improper passing - throw the book at him!

Can't say I blame him. Get there early, put out a saver and come back later.

Seriously though (well not too serious, considering the act,) I saw the Fat Boys on the plaza back in the day and that was a fun show. Loved those guys.

Person is shot at Winter and Tremont streets downtown; suspect may have escaped on the Red Line
Temple Place bar gets OK to wig out and expand
Board delays action on proposed South Station mini-packie to see if owners can somehow convince the T to support the idea
Tito Jackson seeks to put a 'sophisticated, high-end lounge' atop his State Street cannabis shop
No bar cars on commuter rail, but harried downtown workers could soon grab a bottle or six-pack at South Station to go if board approves
Teen arrested in Downtown Crossing for attack that included use of a shook-up soda can and the display of an unfolded folding knife, police say