Two restaurants go into the liquor-licensing arena, only one emerges with a license 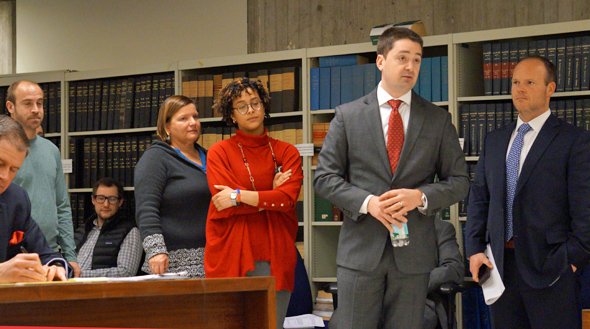 The Boston Licensing Board today chose an existing Mission Hill Thai/sushi restaurant for the one liquor license it had over a proposed shaken-seafood place in Roslindale.

Laughing Monk Cafe, 737 Huntington Ave., had a city councilor, a priest from Mission Church, rival restaurant owners and the local Main Street program backing its application at a hearing yesterday, along with several Mission Hill residents. All said owner Dome Nakapakorn had proven himself a valuable member of the community in the eight months he's been open and that he needed the license to survive and the neighborhood needed the license because of the rapid growth of residential and research and office space around it.

In contrast, Shaking Seafood, 19 Poplar St., which hopes to open in January, had only its attorney's statement that it needed a liquor license because the spicy food it would serve needs something hearty with which to wash it down and because Roslindale residents had proven themselves "respectful towards alcoholic beverages and consumption."

The "neighborhood" all-alcohol license became available after chef Chris Douglass cancelled plans for a restaurant in the former Roslindale Square substation and turned in the license he'd been awarded last year.

These restricted licenses - holders cannot resell them - are supposed to be reused in the neighborhoods where they were granted, but only if the holders actually use them. Since Douglass never opened the doors of his restaurant, the board could award the license to anybody in Dorchester, Mattapan or Roxbury or in any of Boston's "main street" districts, including the Mission Hill district Laughing Monk is in. The board long ago doled out the remaining 74 licenses the state legislature deigned to grant Boston several years ago, largely to try to encourage new restaurants in the city's outer neighborhoods.

Among those who attended the Laughing Monk hearing was City Councilor Josh Zakim, making just his second appearance before the board in his four years in office. Normally, city councilors who want to support a restaurant dispatch an aide.

Also speaking in support of the 34-seat restaurant was Father Philip Dabney of Mission Church, who said he and other priests at the church love the restaurant's food. Dabney was joined in testimony by his brother, in from Seattle, who said that as a Seattle resident, he knows good Thai food and that Laughing Monk is "one of the best restaurants I've ever been to."

Owners of two nearby restaurants also supported the bid, saying Nakapakorn has given generously of his time and food for local events.

Richard Rouse, executive director of Mission Hill Main Streets, said Mission Hill restaurants are in a precarious position, because the demand for ground-floor space is so high these days that they have trouble making ends meet. But without restaurants like the Laughing Monk, he said, Mission Hill would have trouble staying the sort of residential neighborhood it is now.

In contrast, nobody from Rouse's counterpart group in Roslindale attended the Shaking Seafood hearing; nor did anybody from City Councilor Tim McCarthy's office.

The mayor's office supported both proposals.

I don't think I will ever

I don't think I will ever understand the need to cap the number of licenses.

Pretend you are an Old Boston corrupt official

By limiting licenses artificially, you've made them very valuable, as gifts to your friends, kept their nominal value increasing as investments, and blocked competition with your friends' businesses.

City officials have tried repeatedly to get more licenses for the city, but the problem is the state legislature controls the number and they seem to enjoy lording it over Boston in this particular case.

what's not to understand?

Look at the history. Those are the two words behind the fact that the Commonwealth of Massachusetts controls the number of liquor licenses for the City of Boston.

May have been the original

motive, but given the make-up of the General Court for the past 50 years plus, how to account for the policy's continuation? Is it an anti-Boston attitude?

And you better believe that I think about the anti-Boston bias of the suburbanites any time a commenter here who lives outside of the city, even if they were born and grew up in Boston only to have moved out in recent times, pontificates on what Boston city government should or shouldn't do.

Oh, and there's also the idea that Rep. Moran, who is from Boston, is keeping efforts to liberalize the system from clearing the House because he is aiding the value of the licenses to those who currently hold them, but in the end this whole mess is because those outside of Boston felt that the Irish who were running Boston could not be trusted to give out liquor licenses.

the idea is, you know, based on facts

The sad reality of our politics here are that a few very people have all the power in the state due to the general disinterest most of the office holders have. So an active, politically connected rep like Moran isn't just some guy randomly going along with the surburban consensus on liquor licenses but rather a guy who is very close with Deleo.

If I'm some hack from Wareham and the guy in leadership who lives in Boston and is tight with Deleo is selling the message that this situation doesn't need to be changed, why am I going to go to the mat to fight this? Neither I nor my constituents give a damn about this issue.

But back in, say, the 1980s or 1990s when the demand rose for liquor licenses, the Great and General Court didn't give Boston the right that the other 350 municipalities of Massachusetts had- the right to decide how many licenses we need. That made the licenses a commodity, meaning that those who wanted them had to pay good money for them and those who had them discovered their value. I cannot really begrudge license holders wanting to keep their value from being diminished, but when Derek Sanderson was going into the bar business in the 70s, the cost of the license was not an issue.

That was the excuse at the time

"Drunken Irishmen" was the excuse given at the time. Actually, it was to deprive Curley of the bribes and kickbacks he would otherwise have received as the gatekeeper to the licencing authorities.

More evidence this space is going to end up a temporary public events space I guess, which seems fine as there are already maybe too many restaurants in Roslindale. I noticed Redd's had signs up for hiring more staff which means they are probably caught in that tight spot between having prices high enough to cover costs and staff being able to get even better gigs around town. Peak restaurant is here.

Is the demand for ground floor space due to the ever spreading medical area? I know there are offices for Harvard Med, etc... down Tremont towards the basilica.

At least a few months ago, they had to cut back hours because they couldn't find enough workers.

That did come up at the hearing. Somebody (I think it was Rouse) said that, yes, it it were completely up to the marketplace, the Laughing Monk space would be turned into a medical office.

Atleast the Trillium beer garden is open in Rossi!

I just noticed something Adam

The executive director of Mission Hill Main Streets used to be the Suffolk County Sheriff. Weird retirement project, but not a bad one.

Of course, I did miss the update that brought me here, but that's on me.

In other Mission Hill news