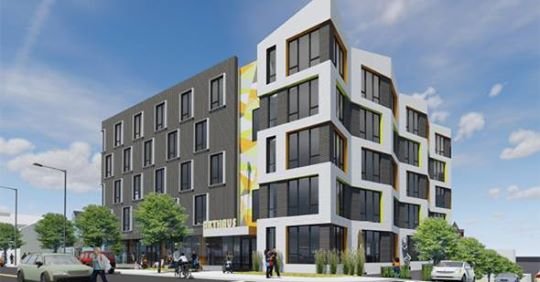 A developer has filed plans with the BPDA for 74 apartments and 9 condos on North Beacon Street, between Sinclair Road and Everett Street that it says will include public-art installations aimed at "celebrating the local artisan culture and history of Allston."

The Mount Vernon Co. wants to raze a former rooming house, two four-unit buildings and a small car dealership and replace them with a five-story building with 74 apartments at North Beacon and Everett and a four-story building with the condos on Sinclair Road.

The proposal is the latest in a corridor along Guest Street that has seen numerous new development proposals since construction began on the giant New Balance complex - such as Stop & Shop's 1,050-unit proposal on Everett Street.

Mount Vernon's site is kitty-corner from a site where another developer is planning an apartment/condo building topped with a vegetable garden.

In its filing, Mount Vernon writes:

The Project is designed and scaled to enhance the surrounding neighborhood by complementing the variety of contextual scales that exist, stepping down from an urban scale along North Beacon Street to a smaller residential scale including the Condo Building on Harvester Street.

The Project will create a new plaza along North Beacon Street featuring an artful landscape design inclusive of plantings and street furniture.

The Project will enliven the public realm with generous sidewalks and an active ground floor featuring a first of its kind flexible gallery/amenity space in Allston. The space will host periodic art receptions that will be open to the community.

The Project will create opportunities to display art around the perimeter of the Project Site, celebrating the local artisan culture and history of Allston. Installations are designed to showcase art at no cost to the artist.

The "flexible gallery/amenity space" would be on the ground floor of the apartment building.

Mount Vernon is proposing a total of 42 parking spaces for the two buildings; it cites the site's location a half mile from New Balance's Boston Landing commuter-rail station and from Green Line stops on Comm. Ave., as well as service by several bus routes.

Mount Vernon hopes to start construction late in 2019, with completion scheduled for summer of 2020. That first rendering does a

That first rendering does a good job of showing how out of proportion the proposal is to the existing neighborhoods.

Most of the area is 3-5 story buildings, rather than free standing houses. And it's less than a block from 15 N Beacon which is about 10+ stories on the main building. Diagonally across the street the ambulance company building is also being replaced with a multi-story building.

they'll be knocking over the rest of the existing neighborhood soon enough.

Almost like we're in a city with big buildings and everything.

Should be no parking

Why do we need parking here again? In such a transit-oriented location there is no good argument for parking. All it does is decrease the total number of units that could be added to this building, increase the cost of construction and therefore the cost of rent/purchase for the units, and lessen the total supply increase, which means the overall housing market will continue to be squeezed.

would have laughed in that guy's face Just for that word salad alone.

God have mercy on you when

God have mercy on you when you're old. Hop on that damn T you geezer, walk or bike in rain or snow, dead of night.

God have mercy on you when

God have mercy on you when you're old and downsize into an apartment because you cannot take stairs any more. You no longer are able to drive, but are paying for a parking spot for the car you don't have. You try renting it out one year, but get tired of the hassle of chasing down the renter for the monthly payments. You wish you had pushed for improvements to the sidewalks and public transit when you were younger and had more energy because you get shut in for a week when people do a crappy job shoveling and the plows leave massive piles at every corner, so you'd have to climb over several feet of snow just to cross the street.

why--because what if I want

why--because what if I want to live there? I work in sales, have a home office, but use my car every day for business. I contribute the community by supporting local businesses and paying sales tax...so lemme get this right: I am not allowed to have a car and I can only live near public transit? that's what it takes to be a good person?

Or don't live there.

You don't get to shove your car into everyone elses space because I'M SPECIAL and MY CAR.

Life has trade offs. It doesn't work that way when you are a grownup.

So, what about the basic transportation infrastructure? Magic improvements in the MBTA? Buses that can float over the congestion of Comm Ave or Brighton Ave?
Raise the trolley tracks over the street so they can go faster?
Those pictures that AG runs constantly of packed crowds of commuters are only going to get worse without signalling improvements and basic track work.

Your comments about transit are on target. I would note that the Boston Landing stop is a short walk/bike/skateboard from this place.

Well, I can't speak for everybody...

but I'm pretty sure I'll be thinking, "Wow, look at all these horrible, ugly, cheap things we built in the 'go-go teens' that are now falling apart."

You may be right

At least there will be "new" rundown places for students and low-income folks to live in.

Gee! I wonder what the rental costs will be!

And when they say "local artisans" does he mean Jim's Deli or Twin Donuts? Or maybe the Tin-Tin buffet?

Let me just take a moment and speculate on what the rental rates for this ode to Allston will be, and I'll use the bio of the principle of Mt Vernon as somewhat of a guide.....

Percelay is the publisher of N Magazine, a publication he co-founded 15 years ago. The magazine is the leading publication of its kind on the island, has won national awards for its quality and boasts the highest income demographic of any seasonal magazine in America

Let me guess.....studios will start at $2500? I'm sure the place will be filled up quickly with many of the high net worth individuals that hang around the Model Cafe.

Does the "local artisan culture" of Allston include...

The Sears "kit houses" people put up all over Allston about 100 years ago were hardly the finest craftsmanship, or the most refined taste.

Sears kit houses are generally pretty good quality. There's one in Roslindale and apparently another one in West Roxbury, not far from the VA Hospital, but according to this website those are the only two Sears kit houses in all of Boston, out of a total of 73 identified (40 authenticated) statewide. If you know of others all over Allston, please share the details.

The hideous brutalist design is totally at odds with the character of the neighborhood and shows an obvious disdain for regular folk of Allston who have to look at this sorry tacky plastic luxury new construction. Sadly soon the working class people remaining in Allston/ Brighton will be displaced by greedy developers all the while cheered on by the Palin-esque 'Build, baby, build' chorus of density-crazed short-sighted sychophants!

I think I just filled up my NIMBY bingo card!

I'm not sure I should be

I'm not sure I should be taking architectural criticism from someone who describes this as brutalist... there's no concrete at all and the name comes from the French phrase for raw concrete...

I bet the rental agents won't

I bet the rental agents won't be letting prospective tenants in on the fact that the ambulance company down the street runs right by every twenty minutes or so with their sirens blaring.

Bad news on that snark

The ambulance garage is supposed to be torn down for that raddishing building across the street.

Raddishing? I'm not following you here but no snark was actually intended.

Sorry, stupid joke on my part

The ambulance garage is slated to be torn down to make way for a residential building with a vegetable garden on the roof (hence my headline on the original post here).

these new buildings are so blah. Can't developers but some style into the design? They all look like they could double as extra space storage facilities.

List of Architecture and Design Colleges in New England

If they went with a unusual, innovative design three things would happen:

1. People would reject it for being "weird" or "not fitting in"
2. The city would reject the plan, see point #1 (Also, Boston is the more conservative city on earth.)
3. They'd need to charge a lot more for the units as "innovative design" cost a lot more to build. And then you'd have people like you complaining it's too expensive.

That's why everything looks the same.

Installations are designed to showcase art at no cost to the artist.

You sure you don't want to charge the artists for the privilege of decorating your property for you?

And the only artists who will

And the only artists who will be able to afford to live there will have to have the financial status of the late great Andy Warhol.

As a former resident of 37 N

As a former resident of 37 N Beacon, I will believe it when I see it. The plans are exactly what Allston needs - more large ugly brick buildings that will scar the landscape. YAY more Yogurt and bubble tea shops. Yeah, that sounds grand!
Now they are calling it an "Arty" space - I call BS -if they had a clue about the Artists and makers they drove out when the place was condemned...The whole thing is a joke.
.

This developer made $75 million on the Brainerd Rd. projects and only gave the community $100-200K in benefits, hasn't he exploited this neighborhood enough?! The city granting these excessive variances are against the article 51 rules and will hurt the neighborhood in the long run - no police, no fire, no safety, no roads, no mass transit, no municipal parking, no infrastructure upgrades. The city is allowing the developers to strangle their golden goose and the neighborhood will suffer on so many levels. Take a step back to consider this, talk to an urban planner before you give your knee jerk reaction.