Surrounded by water, Suffolk Downs development will have extensive measures to survive flooding 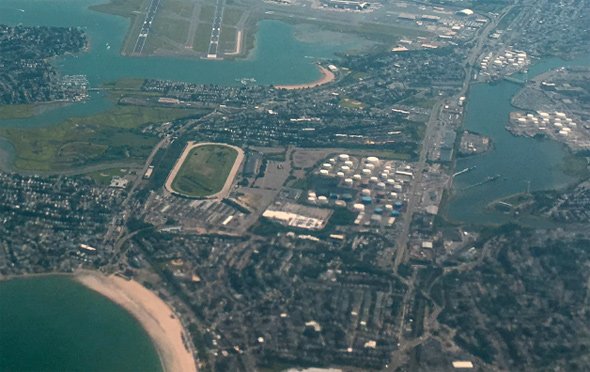 The developers of the proposed Suffolk Downs project can't stop the tides, so they're planning their massive project to roll with the punches as rising sea levels increase the odds the low-lying site on the East Boston/Revere line will flood on a more regular basis.

In a recent presentation to the Boston Civic Design Commission, HYM Investment Group focused attention on steps to help the massive development - some 10,000 housing units, two malls and numerous office buildings - weather climate change. These include garages designed to hold flood waters on their lower levels during storms, other underground water-retention basins, a "tide gate" to block waters from the neighboring Belle Isle inlet and long green spaces that would double as water channels during flooding.

As part of construction - which could take 20 years before the entire project is finished - HYM is also looking at bringing in fill to raise the first floors of some buildings above the level of anticipated floods.

Many of the ground-level features would have double uses, one for dry times, one for days with flooding. For example, HYM is proposing an outdoor performance area that could hold nearly 300,000 cubic feet (roughly 2.2 million gallons) of water during flooding, to a depth of 17 feet: 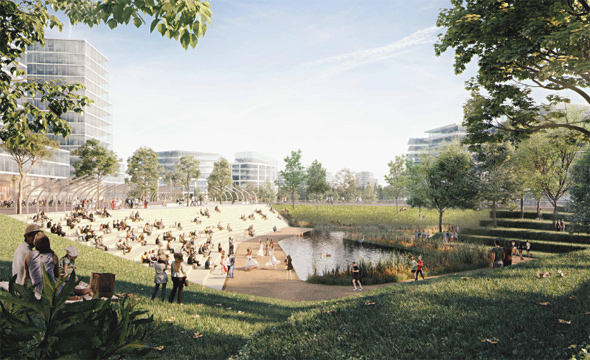 HYM says the primary flooding threat would come from Belle Isle Marsh and inlet just across Bennington Street from its 161-acre site - which it hopes to stem in part with a flood gate on its side of Bennington. But the company says in bad enough conditions, the site could also expect inundation from Chelsea Creek and even just from the open ocean swamping Revere Beach and continuing inland.

In addition to the steps it's taking, HYM says Boston, Revere and the state should consider several measures that would protect not only the Suffolk Downs land, but all the residents - and the tank farm - that also surround the site, including a berm along Chelsea Creek and a large berm on the Belle Isle side of Bennington Street that could double as dedicated bike lanes in drier weather. 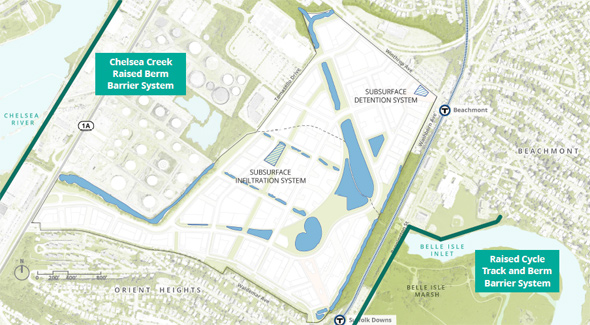 Look at that swale: 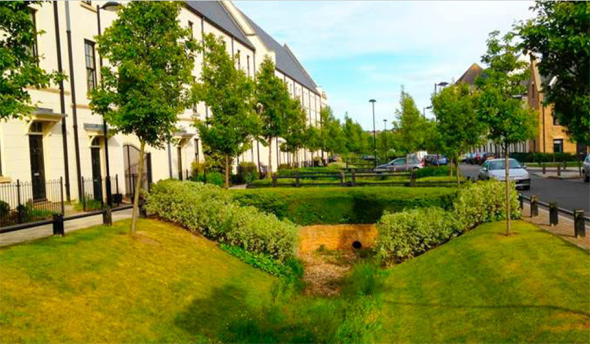 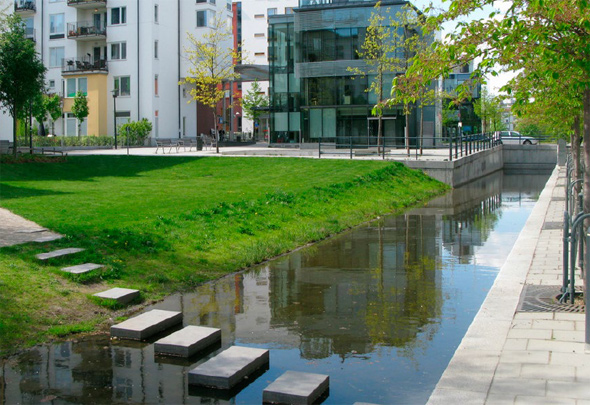 It's kind of ironic that they

It's kind of ironic that they're building ground-floor parking to deal with climate change, when massive car-oriented developments are part of the reason we have climate change in the first place.

Yes, there are Blue Line stations at the edge of the project. But that's not enough to make it not car-oriented.

What would I suggest instead? Something like Maverick Square. Build a grid of public streets, divide the land into small lots, and let small developers build individual residential and retail buildings.

I was with you until the last part. Denser housing is a way to combat climate change since it's less car-oriented and more efficient use of the land. But your solution is to build less housing and more sprawl on the site? Huh?

No, not less dense. Smaller

No, not less dense. Smaller lots and a street grid.

That's what makes a walkable neighborhood, as opposed to a mega real estate project with one entrance onto a state highway.

I don't think it's necessarily ironic

If one believes that by the time the site is finally built-out, EVs are likely to make up the majority (or all) of all new vehicles sold. Moreover, according to EPA figures, the transportation sector (which also includes rail, air, and marine transportation; moreover, not all road emissions are from automobiles) only accounts for 14% of greenhouse gas emissions by economic sector. In other words, the global contribution from cars is likely well under 10% and is easily dwarfed by heating and electricity production.

Even if you build a grid like Jeffries Point, you're not going to make the area less car-oriented since public transit options apart from the Blue Line will remain limited. Development of large buildings with some parking like we've been seeing in the New York Streets section of the South End should demonstrate that sufficient nearby shopping/dining/employment resources allow a development like this to not be car-dependent.

EDIT: Forgot to mention that if I were to consider living in a development like this, I'd be very leery of having a vehicle housed in any lower-level garage that was intended to accomplish flood mitigation. That's just basically asking for your car to be flooded.

Not how it works

Those garages are evacuated in times of flooding.

Miami is already dealing with this, and many cities and towns are requiring lower levels to not be built out, meaning parking elsewhere.

This area cannot be built very high anyway - it is on a logan runway!

This area cannot be built very high anyway - it is on a logan runway!

If you build a street grid,

If you build a street grid, you can run buses. Not private shuttles or time-wasting diversions off routes heading somewhere else, but an actual integration into the transit network.

That's how real transit-oriented development used to get built.

Street Grid at odds with contours

It is a kind of sort of street grid, but there are contours and swales and some elevation things intended as flood control going on here that are at odds with that.

Also consider that a grid makes less sense when a development is surrounded by so much water - the development area does not connect with the rest of the area on all sides or even most sides. If you look at the actual proposal, it has the arterial roadways flowing through along the only axis where that is possible.

Finally, how would you connect such a grid to neighborhoods that don't have any such grid? Rip down houses so they could dead end on neighborhood streets? Remove the oil tank farm? There is no other way to physically connect such a grid with all the surrounding areas not being able to accommodate it. They hooked the major roads in as they were able, but there are limitations to connections to a grid on this site that the neighborhoods and tank farm would never allow to be "fixed".

Harmless or at least not Stupid

What we do know however is that much of what is today East Boston was during colonial times a collection of low islands [e.g. Noodles, Hog, Governors, Bird, Apple], sand bars, Clam Flats, and inlets at low tide -- they were filled over the decades to make an integrated blob of land -- aka East Boston.-- especially Logan.

What we also know is that in the Boston Basin the difference between high and low tide is 10 feet and that flooding of land and sand bars was a regular occurrence. For example Washington Street at Tufts Medical was known as Boston Neck because 6 men standing arms length apart could block land access to Boston at high tide.

Surprise, surprise the only Highlands in Eastie were at Orient Heights [aka hill attop Noodles Island] -- the rest was lapped by waves at some time during the year.

The filling has continued during the expansion of the Army's East Boston Airfield [circa 100 years ago] into today's Logan International Airport. Indeed the most recent significant change in the shoreline was the filling of something called "Bird Island Flats" about 30 years ago which is where the SW Cargo area, Logan Hyatt and Massport HQ is located

So, why the big announcement by the developer? Well, after losing "Amazonia" -- the developer needs to do something to keep the PR engine fueled -- and touting that the future "" HQ " is designed to accommodate climate change is a good PR enterprise toi attract the attention of millennial employees and employers.

To be fair, this was not a big announcement by them

The BPDA now requires developers to show what they're doing to mitigate climate-change issue in general, and flooding in particular. And the flooding stuff was the second half of their presentation to the Boston Civic Design Commission, something developers of large projects, at least, have to prepare. I was looking at the design submission and found all the flooding details interesting, so thought I'd write about it.

Pack it up gramps. Or just stick to the electrical engineering doohickies until you learn more science.

"Whether there is going to be

Except they do. That's why the city has built it into the regulatory process. It's why cities around the country are creating plans, why serious conversations about climate migration are starting to happen.

This isn't some "wait and see" kind of situation either. If you wait too long, then it's just too late because it takes a lot of time and money to rebuild your shorelines and all of the buildings along it.

And this proposal deals with it.

Stick to the science you know.

p.s. I don't publish or organize conferences or chair review committees using my log in name.

In 20 years this site is going to be economic centerpiece while Everett deals with their aging casino that hasn't seen a dime of investment since it opened and repeals nearby development.

HYM should send $500 thank-you checks to East Boston residents for voting down the casino. (And not give anything to greedy Revere.) Good things come to those who are not short sighted.

to the cheeseball nouveaux riche will affect the immediate area like a black hole of depression and poverty decades to come.