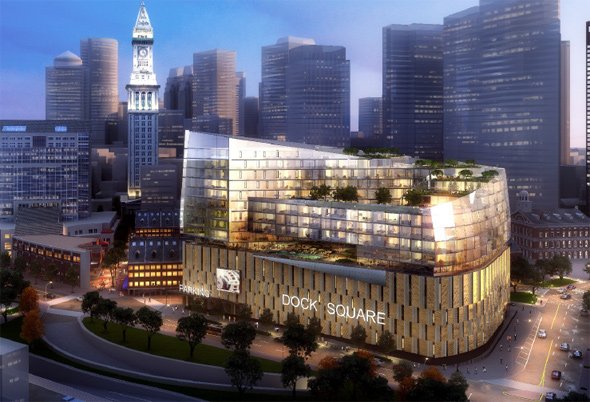 In its filing with the BPDA, Fortis Property Group says it wants to add 195 residential units in 10 stories above the existing garage, which would remain in place, but with the current 698 spaces reduced to 682 - of which 402 would be for self parkers and 280 limited to valet parking.

The filing does not say if the Hard Rock Cafe will be asked to stay, but if the chain wants to remain at the location, it would have to accept having its current 15,000-square-foot space reduced to to 8,000 square feet to make way for a lobby for the residences.

Unheard of for a modern Boston project, the new residential floors would include some four-bedroom units.

Fortis explained its design for what it hopes will become a new downtown landmark:

The new garage façade will be composed of a combination of terra-cotta louvers and perforated metal panels, organized in a vertical grid pattern to reduce the scale of the existing garage facade. LED light strips will be embedded within the grid to illuminate the façade with ambient lighting (see Figure 5-3). The residential addition above the garage will be skinned throughout with glass, curtainwall facades. Subtle surface undulations will be included to add interest to the glass surfaces, and to allow for unit balconies. The goal of the overall façade composition is to create a warm-colored building base that fits into the context of the historical neighborhood, and a contrasting sleek and prism-like top that becomes a recognizable addition to the Boston skyline.

The existing brick-paved plaza is currently underused in part because of its varying grades, with steps down from the adjacent public sidewalks. The Project would create a uniform grade for the plaza, and add plantings, tables, and chairs to make it more welcoming and usable to the public. In addition, the brick façade of the existing garage will be re-clad along its entire perimeter to create a warm-colored building base that fits into the context of the neighborhood. Together, these improvements will enhance the pedestrian experience at the site.

Fortis adds that despite the new floors, the vertical addition "preserves views to the Custom House Tower from the Greenway and Blackstone Street, as well as from Boston Harbor to City Hall Plaza."

Because the building is not all that far from Boston Harbor, architects are taking into account the sort of flooding the area might experience: Plans call for backup power supplies and fuel sources to be located above the height of the worst expected flooding and ground-level spaces will be designed with "non-absorptive materials" so that "in the event of flooding, the building can recover quickly."

Fortis would like to start construction in mid-2019, with completion scheduled for early to mid 2021.

From the Custom House-enamored filing: scale in relation to market

The scale of the street wall along Clinton St is pretty concerning, both in it's sheer height and size, but especially in relation to the market. That last image is a little scary.

I wonder if they could shift the 'peak' of their snaking form to the opposite corner of North St and the Surface Rd?

Unreal the way people react to height in this city.

And people wonder why we have a housing crunch.

You NIMBYs, along with the very misguided affordable housing loons like Grace Holley that align themselves with you guys, are the reason why it costs an arm and leg to live here. We need to build more housing and we don't have a lot of land to do that on. There's one way to solve that problem: taller and denser development.

Hux is one of the posters who was crying about how unfair it was that some Fort Hill development wasn't allowed to be built to the developers' requirements in spite of what the neighbors in that residential area thought.

Wow I must be missing the part where I said don't build the thing. And the 'scary' comment has just as much do with the architectural treatment of the wall as it does the height.

I'm hugely supportive of increased density and height in this city, but there is still something called urban form that shouldn't get thrown out in the race to build.

There are several parking lots and garages on MBTA property that could earn revenue by building residential units along the orange and red lines.

What is up with the "jewel box" tops on things?

Must have some very unique toilet bowls.

Smart looking building, but Faneuil Hall is one the most significant historical structures in the United States. (Quincy Market rates as well.) So it needs a respectable space around it. Exactly how much and what, is debatable, but this sure looks like this one-of-a-kind historical space is getting jammed.

Faneuil Hall has always been an open public gathering space. That's its very essence and its place in history. The more that gets walled in, the more that context is diminished.

Sure it's been already been done even worse at other pre-revolutionary sites nearby, but a lot of that has been even more disrespectful, has undoubtably diminished the feel of the historical site, and shouldn't be used as excuse why sacrificing irreplaceable American history in favor of another luxury condo building should be par for the course.

I'm confuse by your analysis.

You can't stop cities changing (and, over time, all cities do so) so it goes to say that historical structures, if they are not torn down, will be engulfed by their surroundings.

In any case, it does not diminish the history or significance of the historic structures in the city or in any city. It is the history and the stories that matter and those will last the test of time.

here is questionable. Something of the historical context and feeling (and yes - the word 'feeling' is used in historic preservation law) is going to be lost in a case like this.

The developer will certainly tout the property's proximity to famous public historical sites to drive up the marketability and price of the units. So what is the public - and the publics great great grandchildren- going to get in exchange?

It's not a new concept that things will grow up around existing buildings.

With thanks to Virginia Lee Burton

Faneuil Hall didn't exactly start out on a hill in the middle of the country/nowhere in a field of daisies, though.

Could they not decided on what the final design would be? Also prepare to spend a fortune on curtains if you live there.

I certainly won't be moving in there.

But that doesn't mean I'm going to deprive anyone else of that choice! Let's build it anyway!

The description "warm-colored building base that fits into the context of the neighborhood" is of a piece with the "contemporary aesthetic" of the Dot Ave proposal yesterday. Do all proposals these days sound like that?

... four bedroom apartments but that’s it.
It’s too tall and it needs to be 99% affordable.
Also, I’m sick of all the glaring glass buildings going up. There is nothing visually attractive about this building.
Why does it need to be lit up? To add more wattage to the light pollution along to Atlantic coast?

Where does one find affordable housing built to one's personal specification next to a historic landmark?

This property sits within one of the most expensive areas in the city when measured by dollar per square foot.

How does this idea work? How will building a small number of affordable low-rise units in the middle of our downtown area change anything?

Is there anything to explain this sentiment but entitlement?

Let's build less housing and make it harder for construction to

That way we can accelerate displacement in the rest of the City!

I appreciate the above comnebter's desire to drive the riffraff and working stiffs out of Boston under the guise of aesthetics. Chapeau.

It's too expensive for me to live in the heart of a major city, it's NOT FAIR! My mom told me I was the best, and so special....why don't I get to live in a brand new building where I can walk to work, but others do???

a) Shall a video record of Public Hearings/Public Meetings be available online of Boston Board of Zoning Appeal?...

b) Shall a video record of Public Hearings/Public Meetings be available online of Cambridge Board of Zoning Appeal?...

An orange sunset
Guy who was charged with throwing man to the ground outside a Faneuil Hall bar is a Boston firefighter
Guy held on charges he slammed man to the pavement outside Faneuil Hall bar, causing possibly permanent neck injury
Seasonal art display at Bowdoin T stop
Homeless man who is suing all the federal judges in Boston learns there are limits to how far the judiciary will let him go
The Good Life ends in a couple weeks