City says it can flood-proof South Boston as seas rise

The city today released plans for keeping rising seas from reclaiming all the parts of South Boston that sit on fill - which is much of the neighborhood.

The plans, which stretch to 2070, call for spending between $513 million and $1 billion over the next 50 years on a series of berms, seawalls and dunes along the neighborhood's shoreline - and possibly even flood gates at the mouth of Fort Point Channel. It sounds expensive, but city planners say the work could stave off up to $19 billion in damage from floods that would far surpass the ones the neighborhood saw during this past winter's nor'easters, as sea levels rise from 9 to 40 inches due to climate change.

Ironically, some of the proposals call for even more landfill - to create dunes and other water-absorbing features that could double as parkland during sunny days.

Planners say it would be vital to work on most of the vulnerable areas at the same time. Because of the "floodways" in the low-lying parts of South Boston, much of the neighborhood would still flood if, say, Fort Point Channel got protected, but the area along Seaport Boulevard did not.

All that blue represents parts of South Boston that could flood in a storm with an expected sea-level rise of 40 inches by 2070: 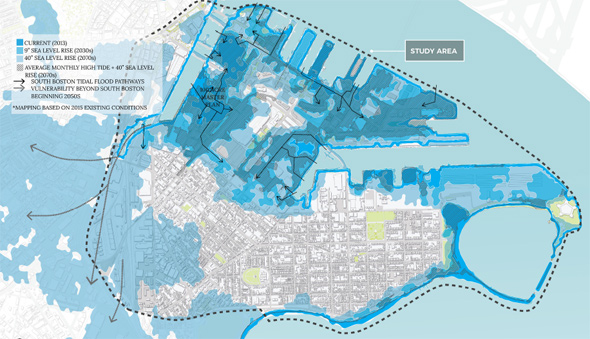 Of most immediate concern, the report says, is Fort Point Channel, which already spills over its seawalls on a regular basis.

Coastal resilience in Fort Point Channel could protect over 100 buildings and 1000 people and reduce by over $300 million the expected losses at the 1-percent annual chance flood elevation with 9 inches of sea level rise. With 21 and 40 inches of sea level rise, coastal resilience measures on the east side of Fort Point Channel could be flanked from other flood pathways and must be combined with coastal resilience measures in South Boston Waterfront, Seaport Boulevard, Raymond L. Flynn Marine Park, and Reserved Channel to remain effective. ...

Flood risk is expected to increase rapidly along the channel, and there are opportunities to partner with property owners and others to incrementally implement solutions. Nearterm actions range from $3 to $16 million depending on design and consist of earthen berms and open park space. ...

Mid-term strategies are similar to near-term strategies and extend north from the 100 Acre Master Plan to Martin’s Park and south to the base of the east side of Fort Point Channel. Shoreline strategies include earthen berms and open park space. Along the existing Harborwalk, it would be possible to incorporate building structures into the line of defense or build new barriers in the water. Bridge guardrails would be converted to floodwalls. The many stormwater outfall pipes along the channel will require flap gates. Mid-term coastal resilience solutions range in cost from $56 to $73 million.

In the long term, earlier strategies can be further enhanced through expanded Harborwalk, possible increased fill and enhanced park space along the channel, long-term flood protection measures to the Arcade, and other improvements that increase the overall flood protection, social, and recreational benefits within the area. Such additional enhancements may cost around $49 million. 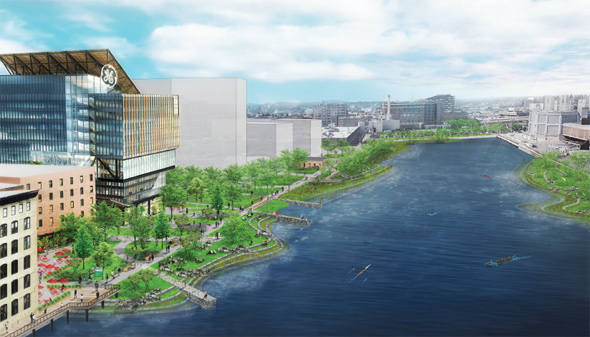 One of the more expensive parts of the proposal, because it's one of the longest, would be steps to protect the residential areas along Day Boulevard. There are two options there:

Option A includes perimeter protection of South Boston along Pleasure Bay and the seashore along Day Boulevard. Coastal adaptations would include elevating the Harborwalk along its current path or routing the line of protection down the right-of-way of Day Boulevard/ Columbia Road. It also would include converting the concrete wall along the southern edge of the Conley Terminal to a flood wall.

Option B includes berm adaptations in the Marine Park along Farragut Road rather than perimeter protection around Pleasure Bay. Along Day Boulevard, the line of protection would incorporate restored beach and dune features instead of elevating the Harborwalk.

The release of Climate Ready South Boston (41M PDF) follows similar plans for Charlestown and East Boston. City planners are also looking to launch similar efforts for the North End and Downtown and the Dorchester waterfront.

Is there any info on how this would be funded? Does the city already have room in the budget for this?

it really does seem that the wrong people will be expected to pay for this.

Mexico should be paying for it.

Thinking that everyone who were able to get those 2-300% increases in their property values over the past decade, while stymieing other needed housing development, are probably a reasonable place to start.

We should stop subsidizing flood insurance while we are at it.

Any idea how the damage to buildings, roads, and waterfront will be funded if they don't do this?

And when waters recede, the roads tend to be in good shape. As for the "waterfront," that's just where the water meets the land. That would remain constant.

They don't necessarily have FLOOD insurance. Not in these areas. Not that will cover regular flooding.

Roads will not be in good shape if they continue to be attacked by salt water.

If you own a home

You need to read this: https://www.iii.org/article/what-covered-standard-homeowners-policy

Flood insurance is an add-on to your policy - it is not part of the standard package.

Who would underwrite financing for any real estate that is in a flood plain that doesn't have flood insurance?

I'll give all of you this- I need to brush up on flood insurance.

Roads tend to be in good shape?

And when waters recede, the roads tend to be in good shape.

Is this really true? Based on what data? Floodwaters are moving - they tend to damage roads by eroding the surrounding soil/sand/whatever, and they can do that very effectively, with a LOT of damage resulting.

Is that we use a special assessment to require the owners of the buildings to pay for the cost of protecting their buildings.

We absolutely need to be

We absolutely need to be prepared for storms & sea-level rise. Having said that, the vast majority of this cost will be to protect the waterfront. This is an area that STARTED development 15 years ago. Why should the residents & taxpayers of Boston & MA subsidize building in an area already known to flood during storms?

If the expensive buildings in the Seaport are swept into the ocean, we will not get any property tax revenues from the soggy crater.

Climate change is a known. Continuing to develop land near water, that is prone to flooding and has flooded, was not wise. I do not want to pay for protecting these expensive but ill planned real estate developments. And I should not have to.

I agree with Mike S.

Note that additional buildings are now being built to adaptive standards (GE Complex), but most of what is there now has been there for a century or more.

If you are referring to Fan Pier specifically, please know that flood protection measures have been and are indeed paid for by both the condo owners and commercial tenants. For example, the purposely sloped and elevated green spaces of Fan Pier park are maintained by condo owners (that's right, this public space is privately maintained). Structures such as aqua fences were paid for by condo owners and commercial tenants. Your tax dollars aren't going towards it. If anything, the condo owners have been and are funding spaces that you have access to.

Send the bill to the oil and

Send the bill to the Boston

Send the bill to the Boston Wharf Company/BRA/BPDA/ISD that allowed developers to build on flood prone property on landfill next the unpredictable ocean.

How about the city/state adds a special assessment (just like when a condo association has to get a new roof or suchlike) on the property that will be protected? There are scads of properties up and down the coast that seem to expect to be rebuilt after weather events.

I guess there's no good answer, but the sea wall look like 'The Wall' in Hampton Beach, NH, a massive concrete barrier between you and the ocean.

Fortunately, our handsomest politicians came up with a cheap, last minute way to combat global warming. Ever since 2063, we simply drop a giant ice cube into the ocean now and again. Of course, because the greenhouse gasses are still building up, it takes more and more ice each time, thus solving the problem once and for all.

We all KNOW that the real answer is drill baby drill into the Yellowstone caldera until we get at least a Krakatoa level volcano event to trigger a mini-Ice age.

Wait, maybe we should find a different volcano to use farther from our farm, er ethanol, lands like one in say New Zealand or Iceland.

How much to just abandon it? To move the people away from it?

Seems like a lot of money to protect very little when managed retreat is a reasonable option.

There's probably close to a billion in residential property alone just along the flood zone on day blvd... Not including the economic outout of the people living there.

Or the MWRA and Deer Island's water treatment plant?

And why did the city allow all this waterfront development without requiring each developer to build their portion of flood protection?

I haven't seen anything about that, certainly not to the same level as the Seaport area (which has flooding issues pretty much every winter, it seems).

Were They Spying On My Kids and I

Because I swear we did the same thing in Minecraft when we were mining for iron ore next to some water.

that rising seas will mean we just have to learn about limitations and failure, and, perhaps resilience though not on our terms......might learn a little bit about the timeliness of forethought along the way

don't all move to Allston now

The city will have a bigger problem on their hands

when the Back Bay, which is also built on fill, begins to turn back into swamp.

The only real solution, which is probably past, was to deal with climate change. Oh, well.

at this point, the Seaport has a lot more value to the city than the residential Back Bay, doesn't it? Lot of high dollar employers down in the Seaport...

There is no consensus on how

There is no consensus on how much more greenhouse gas we are going to spew in the atmosphere over the next fifty years. How much sea level will rise during that time period and beyond is even more speculative.

It’s not like I have a better solution -Ok, I have one; tax carbon emissions at a punishing price, but it doesn't work politically. I just think that the proposal of building this kind of wall should come with a disclaimer like this; “We are making a lot of wild guesses about how long this wall will be effective”

There is no consensus on how

There is no consensus on how much more greenhouse gas we are going to spew in the atmosphere over the next fifty years. How much sea level will rise during that time period and beyond is even more speculative.

It’s not like I have a better solution -Ok, I have one; tax carbon emissions at a punishing price, but it doesn't work politically. I just think that the proposal of building this kind of wall should come with a disclaimer like this; “We are making a lot of wild guesses about how long this wall will be effective”